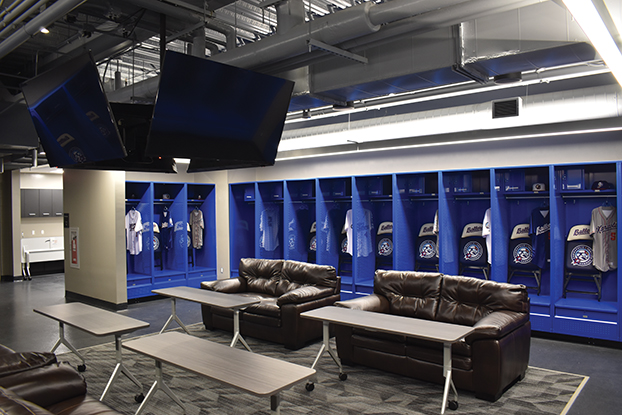 The Cannon Baller's team clubhouse has hardly been used since the minor league season was shelved due to COVID-19 concerns. Ben Stansell/Salisbury Post

KANNAPOLIS — Players for the Kannapolis Cannon Ballers haven’t had the chance to enjoy their new locker room yet, but for $35 you could be one of the first to hang out in the clubhouse.

Complete with four TVs, four leather couches and dozens of never-worn Cannon Ballers hats and jerseys, the locker room is currently available as a venue to host fantasy football draft parties. As fantasy football has gained popularity in recent years, the virtual game’s players have started hosting real-life draft parties in hometown bars, basements or even in Las Vegas nightclubs.

Now, the Cannon Ballers — the Chicago White Sox’s Single-A affiliate — are getting in on the action.

“We’re just trying intricate ways to bring people out here,” said Rachel Kilinski, special events manager for the Cannon Ballers. “A lot of people know that we’re open, they know that we’re a park, but they don’t necessarily get to see behind the scenes and go into the spaces. We can offer so much more during this time.” 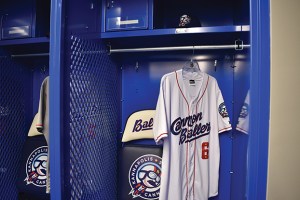 The Kannapolis Cannon Ballers, who underwent a full rebranding last year, were set to open play in the newly-built Atrium Health Ballpark in April when the season was delayed due to concerns over COVID-19. Those concerns continued to fester until the minor league season was officially canceled by the MLB on June 30.

That left the Cannon Ballers front office staff with a largely empty stadium. Although part of the stadium is open daily to the public as a park, that still left lounges, suites and batting cages completely vacant. Instead of waiting around for fans to eventually fill those spaces, the team’s staff started brainstorming different ways to use the space in the meantime.

“We have a unique space and we’ve really built it to do stuff 363 days a year, so we’d only be closed Thanksgiving Day and Christmas Day,” Kilinski said. “Other than that, we want space to really be used.” 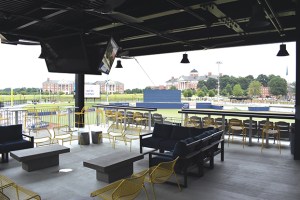 “It’s a great amenity for the season ticket holders. And non-game days, this is a very flexible space,” Kilinski said. “You can have meetings here, presentations. We’re going to do a wedding reception, corporate events, holiday parties — you name it and it’s probably been discussed.”

The Cannon Ballers already have one wedding reception booked for December, dependent on state laws concerning indoor capacity at the time. There’s also talks to turn the space into a restaurant. The concession stand at the stadium has already been open for business, serving up the same hot dogs and sandwiches that customers would have been eating while watching the team compete.

“If you go there on an afternoon or on Saturday there is a chorus of people that come through there who are enjoying a hot dog, enjoying a burger, maybe a beer, and they’re sitting there enjoying the view and the idea that this is going to be our future downtown,” Kannapolis Mayor Darrell Hinnant said.

The restaurant in the Kinetic Clubhouse would be a classier affair, offering diners a menu designed by the team’s executive chef.

“We haven’t decided exactly what the menu will be, but my assumption would be a little high end,” Kilinski said. “Right now at Boomer’s Bistro we serve your ballpark fair. We’ll probably move up to something a little bit more upscale.”

While the details on the restaurant are still being ironed out, fans can also rent out the ballpark’s batting cages or even the entire field for batting practice.

“For the batting tunnel, we have four hours for $250,” Kilinski said. “That includes one of our staff members pitching. Right now, we don’t have a pitching machine because the White Sox never sent one after the season was cancelled. We’re also going to do birthdays in there as well. You get 90 minutes in the batting tunnel, which includes food and soft drinks for $240.”

The measures that the team is taking to utilize their space is also a way to generate revenue in a time when it’s missing out completely on ticket sales and partially on concession and merchandise sales. The team was expecting thousands of fans to be in attendance throughout the season. 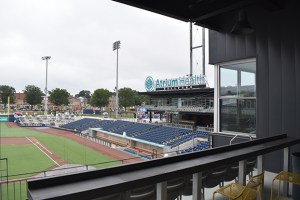 This is the view of the ballpark from the Sky Lounge, which could seat up to 25 people for a fantasy football draft. Ben Stansell/Salisbury Post

The city of Kannapolis bet big on the success of the team and the stadium when it invested $53 million on the ballpark and an additional $54 million to improve the downtown area around it.

“The ballpark has been everything we thought it was going to be,” Hinnant said. “The only thing that happened that has been a negative was that we just didn’t get a season. Everything else has been wonderful as a result of it.”

The mayor applauds the team’s efforts to put their currently unused facilities to use.

“These creative ideas help people come back and tell their friends about it,” Hinnant said. “There’s no telling how many times I’ve been asked ‘Tell me what we can do downtown now? I know you didn’t have a season, but somebody said you all are serving food down there.’ That word gets passed around.’”

With uncertainty surrounding when the next minor league season will be played, the Cannon Ballers will continue to make the best of their ballpark. Nothing, not even the idea of potentially hosting a high school prom under the concourse, is out of the question.