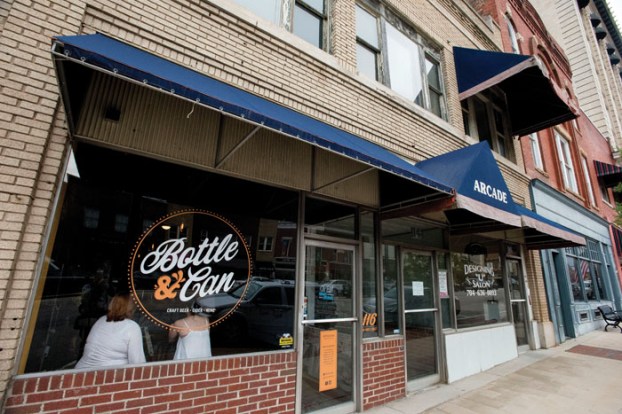 JON C. LAKEY/SALISBURY POST Bottle and Can located on West Innes Street recently opened their doors to craft beer lovers. When fully stocked the retail beer store will offer over 200 different craft beers. Along with the cans and bottle beers they offer 8 different beers on tap that will continually rotate out as supply runs out. Mother and daughter team of Sue and Shannon Bergland operate the two locations of Bottle and Can. The original location is located on West Salisbury Street in Asheboro. The Salisbury Bottle and Can opened this week. Salisbury, NC 5/9/19

SALISBURY — One of Salisbury’s most popular craft beer spots will soon be expanding to Concord.

Opened in downtown Salisbury in May of 2019, Bottle and Can has become a go to spot for specialty craft beer. Now, the company is opening another location at 9 Union Street North in Concord.

Shannon Bergland opened the first Bottle and Can in Asheboro in 2017, but saw the potential for a store in Salisbury during a visit. So far, the appetite for craft beer in Salisbury has allowed the business to thrive.

“This town really understands the idea of a bottle shop and they get that if you can’t sit down and have a draft, I still sell beer to go,” Bergland said. “The people here have been great and have kept me going through COVID.”

Now, Bergland believes she can repeat that same success in Concord.

“We know that this is a great business, you just have to be in the right town. Concord seems like the next step,” Bergland said. “There’s not a bottle shop there, but they have five breweries so people definitely drink beer there. The temperature is ripe.”

The plan is to open the Concord store right after Labor Day, Bergland said. However, it could be later than that if any unforeseen complications arise. The new location will carry a similar selection of craft beer, cider and wine as the Salisbury and Asheboro locations.

The interior of the Concord location will feel similar to the store in Salisbury, but it will be double in size. That will allow Bergland to install more seating for customers to sit and enjoy a beer.

While Bottle and Can is expanding into Concord, the future of its Asheboro location is up in the air. The lease is set to expire on the building currently housing the business and Bergland isn’t sure if they will be able to find another suitable space.