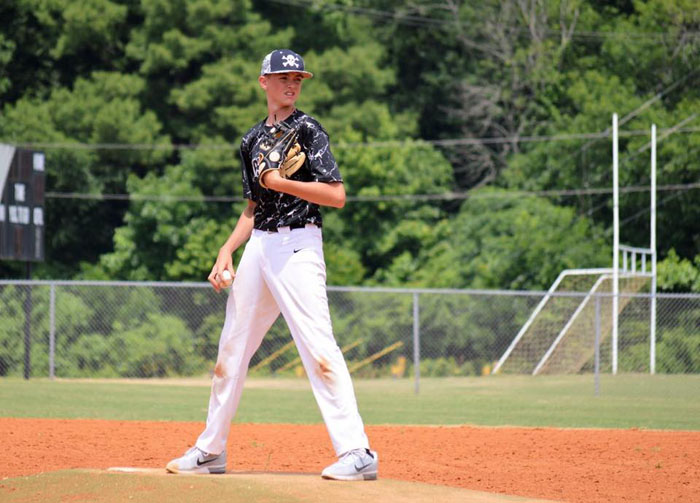 GRANITE QUARRY — Chance Mako is a name that has a nice, bold ring to it.

It fits a gunslinging cowboy or maybe a character out of a science fiction book. There’s actually a “Hunger Games” character named Mako Chance, but that’s just a weird coincidence. Mako was born in 2004, several years before the “Hunger Games” became a hit.

Mako has pitched to a mere eight varsity high school batters in his East Rowan career — that’s right, eight —  but the potential for the polite, 6-foot-5 (and still growing) right-hander is through the roof.

Lots of authorities in the world of baseball believe his ceiling is unlimited.

Mako, a sophomore this year at East Rowan who just turned 16, already has verbally committed to N.C. State’s baseball program.

“N.C. State is a place where I know I could enjoy going to school for four years,” Mako said. “That’s a great program and I’ve already built a great relationship with the coaching staff.”

What makes Mako, whose parents, Chris and Martie, both grew up in Rowan County, special?

Well, it’s a combination of things. But at the core of  his potential is size and velocity.

Mako threw 91 mph this summer with his showcase team, the South Charlotte Panthers, and that may be just the beginning of serious smoke. Hatley believes it’s probable that Mako will be one of those elite 96-97 mph guys by the time he’s a senior. He also has a changeup, curve and slider to complement the hard stuff.

Mako said physicians project him to grow to 6-7 or 6-8. Increasing velocity is likely to come along with that size.

“He’s got that frame and that height, and you just can’t teach that part of it,” East head coach Brett Hatley said. “His father is a big, tall man. Chance has that same big frame, although he’s just starting to grow into it.”

Hatley remembers when East faced Charlotte Providence’s 6-foot-6 Ty Buttrey, who was a fourth-round pick out of high school in 2012 and now pitches in the big leagues with the Los Angeles Angels.

“You just don’t run into  those 96-97 guys in high school,” Hatley said. “Buttrey was the only one I can remember seeing in high school. He had that extra velocity, and Mako could be another one of those special guys.”

Everyone gives Mako an A-plus on his report card as far as the intangible things required to become elite.

“His work ethic is incredible,” Hatley said. “The right makeup to be something special is definitely there. He’s not just some talented kid. He’s a kid who’s working has hard as he can to use that talent.”

Mako said the one thing he’d most like for people to understand about him is his work ethic. He’s not just coasting with that big body and electric arm. He’s putting in the time to get where he wants to go.

Besides throwing hard, Mako also swings the bat pretty well and is a capable first or third baseman when he’s not pitching. There’s not much doubt his future will be tied to the mound, but he should launch quite a few home runs in high school.

“He’s got a ton of power and hit three homers in our six jayvee games before the season got stopped,” Hatley said. “He’s got things to work on as far as making more contact and putting the ball in play with two strikes on him, but he can definitely drive the ball a long way.”

Mako is a New York Yankees fan. His favorite player is surprisingly not a hurler. It’s the Yankees’ towering slugger Aaron Judge.

He likes to fish and hunt for an occasional break from the diamond, but baseball has been a priority for him since Tee-Ball.

“I did try basketball for a while — my dad played basketball,” Mako said. “But I realized that the most sensible thing for me to do was to put all of my effort into being the best baseball player I could be.”

Hatley said Mako has benefited from outstanding coaching from an early age. Besides his father, Mako has been well-schooled by former East Rowan coach Brian Hightower. Mako has played with infielder Cobb Hightower, Brian’s son, on a number of travel teams that have enjoyed great success.

Hatley’s varsity team was loaded with pitching in 2020. East Carolina commit Jake Hunter was the favorite for Rowan County Pitcher of the Year honors and JD Basinger and Cameron Padgett also have proven themselves as ace-level pitchers who would be No. 1 starters on most teams. The plan was for Mako to work mostly on the jayvees and pitch when needed on the varsity.

“I was getting calls from ACC coaches wanting our jayvee schedule,” Hatley said. “That’s not something that had ever happened before – and coaches weren’t just calling. They were showing up at 4 p.m. for jayvee games.”

Mako pitched and sometimes swung for 25-6 South Charlotte Panthers squad that played in tournaments against regional and sometimes national competition this summer.

There were games in which Mako was striking out two batters per inning against very strong opposition.

COVID-19 had little effect on the Panthers’ schedule and Mako got seen by a lot of coaches.

What happens next for Mako, Hatley and the Mustangs is going to be intriguing .

The NCHSAA has laid out a plan that has the first baseball practice set for April 12, the first contest on April 26, and the final regular-season contest on June 11. Limits are 14 games for the regular season and two in any week.

Hatley has Hunter, Padgett, Basinger and Mako, plus four or five more capable arms who are hoping to get innings.

“I’m not a fan of the NCHSAA schedule,” Hatley said. “Two games a week — what are we supposed to do, pitch all our guys one inning? Our team got to play six games last spring and now we’ll be playing 14 this year, so that’s just 20 games in two seasons. That’s not even one full season. But we know it’s not just us. We know everyone is in the same boat. We’ll make the best of it.”

At least no one on the staff is going to be overworked.

Mako added about 15 pounds over the summer months to 180, so he can still add a lot more weight.

Hatley is looking forward to seeing him grow — both physically and as a player who could be part of huge seasons at East.

“He’s on a trajectory right now to be one of those special guys,” Hatley said. “We want him to keep developing.”