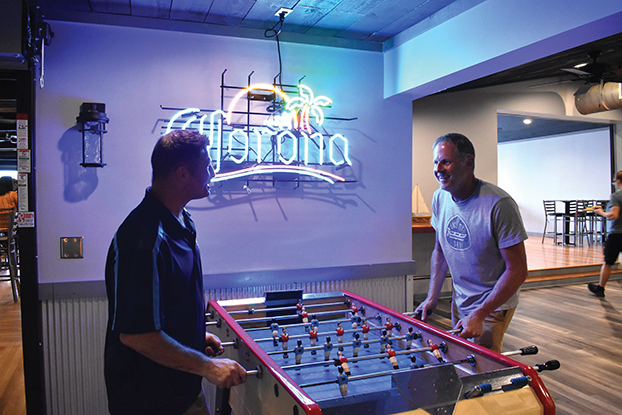 Littleton and Wetzel used to hang out at the High Rock Boat and Ski Club. Now, they own the same building together.

HIGH ROCK LAKE — When Mikey Wetzel moved to the High Rock Lake area 12 years ago, he heard about a place called the High Rock Boat and Ski Club. An avid wakeboarder, Wetzel called the listed phone number in hopes of joining and maybe meeting a few fellow water sport enthusiasts.

“I called and I asked when they had meetings and how I could be a member,” Wetzel recalled. “They said ‘All you have to do is come down here and fill out an application.’ And I’m like ‘OK, when are your meetings?’”

But there were no meetings. Wetzel expected a club for boaters and skiers; it was a restaurant.

Wetzel was slightly confused, but decided to check out the place anyway. He found out that the restaurant, which he described as an “institution” of High Rock Lake, was registered as a club to take advantage of a loophole in the Rowan County law that allowed them to serve alcoholic beverages.

“The loophole is that you have to be a private club,” Wetzel said. “A golf course that might be in the middle of the county can have a clubhouse that’s members only, but they have to have paid memberships. They have to have a membership and guest policy.

Wetzel, who owns Go Burrito in downtown Salisbury, ended up joining the club with his friend Todd Littleton, the owner of City Tavern. The two spent weekends perched at the bar at the Boat and Ski Club, watching sports as they quickly became regulars. While they enjoyed hanging out at the restaurant, they couldn’t help but notice some improvements that could be made.

“We’d talked for years about how someone should buy this place,” Wetzel said. “A lot of great people have taken a stab at running it, but the thing is, the building is old and it needed quite a bit of investment.”

In November, when the previous owner of the restaurant was looking to sell, the two restaurateurs decided to pounce.

Upon purchasing the building, Wetzel thought they’d be able to complete renovations and have it open in a couple months. But after examining the facilities, he knew it’d be a challenging renovation. 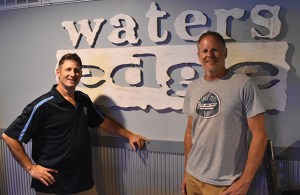 Mikey Wetzel and Todd Littleton pose in front of a sign that they handcrafted to display in their restaurant.

“We had planned on spending two or three months fixing it up, but as we got into it — the building was in rough shape,” Wetzel said. “The walls, the electrical components, it was in bad shape.”

So the pair went to work, carrying out a complete renovation. They ripped out the bar they’d sat at for several years and moved it to a different part of the restaurant. They installed 16 draft beer options that are kept at exactly 31 degrees by a new cooling machine. Wetzel and Littleton tore down clunky columns and replaced the low-hanging roof with a more spacious ceiling. The burgundy carpet and brown walls of old were transformed into sleek hardwood floors and white, silver and blue walls.

A $21,000 glass window replaced smaller windows, allowing diners and drinkers to enjoy their meal with a better view of the lake. Along with expanding the outdoor deck, Wetzel and Littleton installed garage doors to the walls that will soon be opened to let diners enjoy a fall breeze. 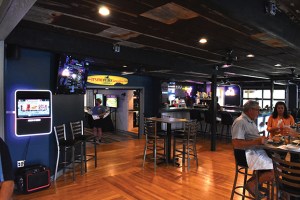 The new bar at Water’s Edge is equipped with a beer cooling machine that keeps draft beer at 31 degrees.

Throughout the renovation process, Wetzel and Littleton relied on their previous restaurant experience.

“Having a partner was good too. This is, and still remains, a very challenging project,” Wetzel said. “We bring different things to the table. He’s got full-service experience and my restaurant is very process oriented. We both have a great vision for having this place be fun.”

The restaurant makeover was extensive, and it wasn’t just physical. Wetzel and Littleton completely overhauled the branding of the old Boat and Ski Club as well.

“We rebranded it as Water’s Edge because, from a marketing perspective, the name tells you right away that it’s a waterfront restaurant,” Wetzel said. “Our theme is vintage water ski girls. That’s a nod to the old boat and ski club.” 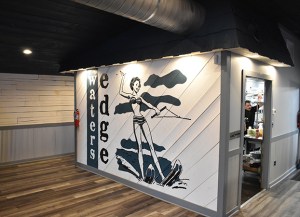 The theme of Water’s Edge is vintage ski girls, a nod to the buildings past and the culture of High Rock Lake, said Wetzel.

While the new owners have changed almost everything about the old restaurant, they’ve had to remain a private club. So, when patrons walk in the front door, they’re required to sign their names in a book and become members. A $1 membership fee is also incurred.

Since opening a couple weeks ago, the restaurant’s membership has been steadily climbing.

“We’ve been open for two weeks and we’ve already signed up 1,500 people as members,” Wetzel said.

Even with current state orders requiring restaurants to reduce indoor seating capacity to 50%, Water’s Edge has enough space to accommodate those numerous new members. Along with its indoor seating, the restaurant has several decks with chairs and tables. And since Wetzel and Littleton own the 12 acre plot of land around Water’s Edge, they joke that they could fit huge crowds.

“We’ve got an indoor capacity of 289 people,” Littleton said. “And outside, we could fit a couple thousand.” 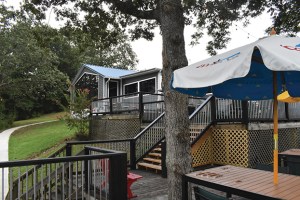 Water’s Edge has a multi-tiered outdoor deck area and Mikey Wetzel plans on adding even more.

Wetzel is excited and relieved that Water’s Edge is finally open and running, but his ambition doesn’t stop there. He has a laundry list of what he wants to accomplish next, including adding another deck, renovating the volleyball court outside, building more docks and potentially installing a stage on an open patch of grass near the restaurant. There’s even a house on the property that they plan on turning into an AirBnB.

“It is a compound,” Wetzel said.

For now, though, Wetzel is focused on expanding the menu and ensuring that Water’s Edge is a place where Rowan County diners want to hangout.