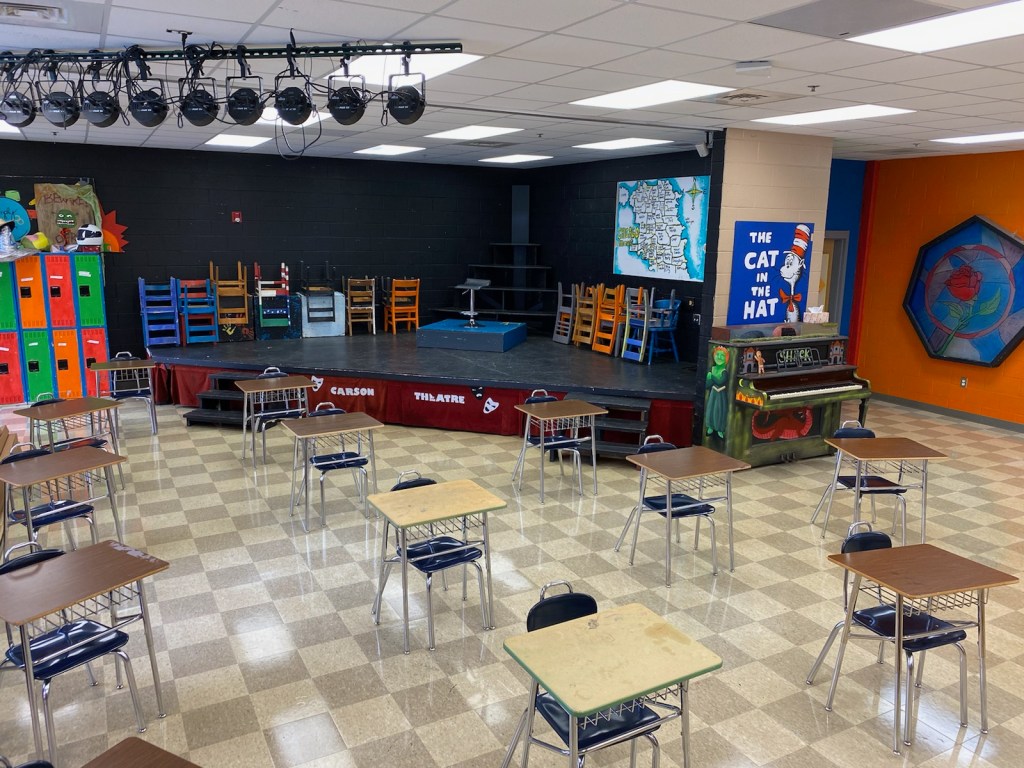 Photo submitted - A look inside the theater classroom at Carson High School. The mini stage which would normally be crammed with students will be less so at the start of this year, and desks are an unusual sight in theater spaces.

Some adaptations are straight forward: students and teachers will be required to wear masks and maintain social distance almost all the time.

Spaced-out desks will be another common sight, too. The change is made possible by drastically reduced class sizes. Students will attend school two days a week in two different groups. Thousands of students have migrated to virtual-only options either by enrolling in the Summit Virtual K-8 or enrolling virtually though their high schools.

The changes to how classrooms are laid out will affect some subjects more than others. For Alex Reynolds, a theater arts teacher at Carson High School, this is the first time he has seen desks laid out in a theatre classroom. Reynolds said the desks help kids maintain social distance and provide a home base of sorts during the day.

“It’s going to be a little different,” Reynolds said.

Working in close proximity in groups and with games is a big part of theater education, but Reynolds said this year he will have to figure out how to do things differently.

“Most of us have come around to the idea, as teachers, that we will do whatever we think is best for the kids’ safety so we can stay in school,” Reynolds said. “That’s our ultimate goal is to be here so we can be present with kids and give them as much education as we can, even if it’s only two days a week. Two days a week is a whole lot more than no days a week.”

Reynolds said nine out of 10 kids may feel safe, but that 10th kid may have a preexisting condition that raises concerns for their health. He emphasized the importance of making sure everyone in the room feels as safe as possible.

“In the middle of this, you are not going to learn anything if you don’t feel safe and comfortable,” Reynold said, adding planting kids at desk may not be an optimal way to teach, but it is a good way to make them feel safer in the class.

The biggest difference for Reynolds as well as West Rowan fifth grade teacher Ashley Holshouser is where students can be within a space.

West Rowan Elementary would normally place students in close proximity with alternative seating at tables so they could work socially. This year, students have to be spaced out, and Holshouser said the spaces have turned from collaborative to individual spaces.

She is coming up with ways to turn activities like icebreakers into something students can work on alone while ultimately feeling part of the group. One popular activity is challenging: students creating the longest paper chain.

The activity is normally done in groups using 10 pieces of construction paper and some masking tape. This year, Holshouser may give each student their own paper and tape, then assign them to groups to coordinate their efforts without sharing materials. She could later combine the lengths each student managed.

“That way I can see how they came together as a group of four to overcome the challenge,” Holshouser said.

Holshouser said she has already been talking to her own daughter, a kindergartner, about social distancing and wearing masks in school. She said reminding kids not only what to do, but why they are doing it goes a long way to getting kids to cooperate with the guidelines.

Reynolds and Holshouser say they are both excited to see their students, but they are nervous. For Reynolds, he is nervous at the beginning of every school year, but this year there is an entirely new set of worries. Holshouser sees a silver lining in how small her class size will be. With fewer than 20 students, she can focus on meeting the needs of each student and her passion for small-group teaching.