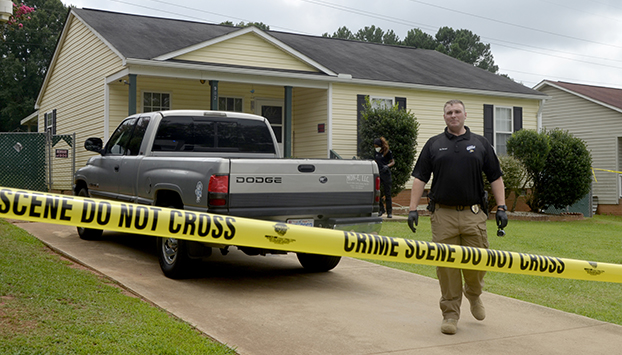 Salisbury crime scene investigators Jay Basinger and Victoria Young take pictures and video outside of this home on Celebration Drive where a son was accused of shooting his father following a Thursday morning argument. Shavonne Potts/Salisbury Post

SALISBURY — A 28-year-old man was in jail Thursday and his father was in critical condition after a morning argument turned violent.

The father and son argued at their home at 902 Celebration Drive, located off Ryan Street and near Old Concord Road, police said. The altercation became physical when the son pulled a handgun and shot his father, police said in a statement.

Eugene Monroe was placed in the Rowan County Detention Center under a $100,000 secured bond.

Police investigators spent hours at the home, located in the Forest Creek subdivision, taking video and pictures of the home and collecting evidence from inside the home. Police used crime scene tape to block off a perimeter around the house.