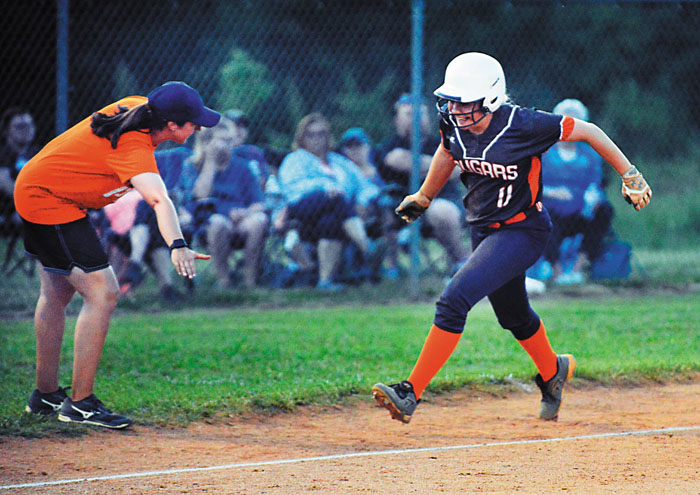 CHINA GROVE — The NCHSAA’s revised calendar for the 2020-21 school year condensed the softball regular season to a six-week run from mid-March through the end of April.

But Carson senior Liza Simmerson, who already had her junior season chopped to six games by COVID-19, isn’t griping about the latest adjustment to her life.

She’s looking on the sunny side. There’s a plan now and having dates and guidelines definitely 10-run rules the uncertainty and anguish of not knowing what’s coming next.

Born on Christmas Eve in 2002, Simmerson has been a present for her family ever since. She goes through life bubbling with enthusiasm and energy and has a lot to be excited about these days.

She announced a commitment recently to USC Upstate’s softball program. That’s a strong Division I program in Spartanburg. USC Upstate went 41-15 in 2019 and was 17-7 in the shortened 2020 season. USC Upstate has played in seven NCAA regionals.

“Our junior season was cut short and college coaches didn’t get to come watch us play, and then there was more uncertainty about this year,” Simmerson said. “So I had been a little worried about it — was I going to get recruited and get a chance to play in college? But everything happened fast with USC Upstate this summer. They weren’t even on my list. I hadn’t really thought about them as an option, but everything changed almost overnight.”

USC Upstate scouted Simmerson playing in a travel-ball tournament not long ago in Asheville. She was playing for Team North Carolina 18U, coached by Dennis Horne and Scott Helms.

“I don’t mean to brag, but I hit a home run one at-bat and then beat out a bunt my next at-bat, and it was just really good timing,” Simmerson said. “USC Upstate started contacting me and recruiting me after that.”

Simmerson described the USC Upstate campus as “super pretty” and the facilities as “super nice.”

“I loved everything about the school and I really liked the coaching staff,” said Simmerson, who plans to major in business or graphic design.

Softball became Simmerson’s favorite sport early. Her first travel team was a Rowan Razorbacks squad coached by Steve Yang and Rob Hales. They also would coach Simmerson in 2015 when she was part of the Rowan Little League squad that became local celebrities when they won the World Series.

Simmerson is a 4.125 GPA student who also can hit with power, run and field.

“Liza is an awesome kid, hard worker, leader, great student,” Carson head coach Charissa Duncan said. “She put herself in a great position to be recruited by a strong program.”

She made an immediate splash for the Carson varsity as a freshman in 2018. That was the year Carson won 20 games and made a run to the Final Four in 3A. Simmerson batted .429 with two homers and 10 doubles.

She was off to a .533 start in 2020 and already had smacked two homers when that season was stopped.

“She can really hit, but she brings a pretty full package as a softball player, and that’s been the case since her freshman year,” Duncan said. “She’s played first base for us because that’s where we had a need, but she can play a lot of positions.”

Simmerson said the most likely positions for her to play in college are shortstop, second base or center field.

She’s looking forward to the chalenge of college, but she’s also excited about getting a chance one last chance to play with her Carson teammates this spring.

“We’ve got the strongest senior class of girls we’ve had since I’ve been here,” Duncan said. “We’ve got a class full of girls who just live and breathe sports. I feel for them because this  is going to be twice now that the Class of 2021 has gotten the short end of the stick. But these are great girls, and they’ll make the best of it.”