NCHSAA: No fall football under revised calendar for high schools

The North Carolina High School Athletic Association has decided to postpone football until 2021.

Feb. 8 will be the official start date for the first practice, with first contests scheduled for Feb. 26. The regular season is set to end on April 9.

Football regular seasons will be limited to seven games, with no more than one game in a week.

NCHSAA board members announced the altered sports calendar Wednesday for the 2020-21 school year.

Under the revised plan, all seasons were significantly shortened, but all sports will, at least, have a season.

The NCHSAA hasn’t announced additional plans, but playoffs are expected to be conducted.

Basketball will still be a winter sport, but the season has been reduced.

First practices are set for Dec. 7. First contests are on Jan. 4. Regular seasons end on Feb. 19.

Seasons are limited to 14 games, with no more than two games in a week.

The first practice for baseball is set for April 12, with opening contests on April 26.

Regular seasons will end on June 11.

Seasons are limited to 14 games, with no more than two in a week.

Wrestling will come later in the school year than normal and will have the same schedule and limits as baseball.

The first contests will be cross country meets and volleyball matches.

First practices are Nov. 4, with first contests on Nov. 16. Final regular-season contests are on Jan. 8.

Swimming will follow, with a Nov. 23 first practice and Dec. 7 first meets.

Boys soccer is set for January, with first practice on Jan. 11 and first contests on Jan. 25.

Final regular-season contests are on March 12.

Season limits are 14 matches, with no more than two in a week.

Boys and girls golf, boys tennis, girls soccer and softball will have first practices on March 1 and first contests on March 15.

The final regular-season contest is April 30.

Limits for all those sports are 14 games or matches, with two the limit in any week.

Girls tennis and boys and girls track and field will fall in the same window as baseball and wrestling.

First practices are April 12, with first contests on April 26.

Final regular-season contests are on June 11.

The cheerleading invitational is set for May 1. 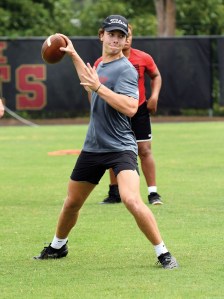 Quarterback Vance Honeycutt  and the Hornets won’t be playing football before February, photo by Wayne Hinshaw