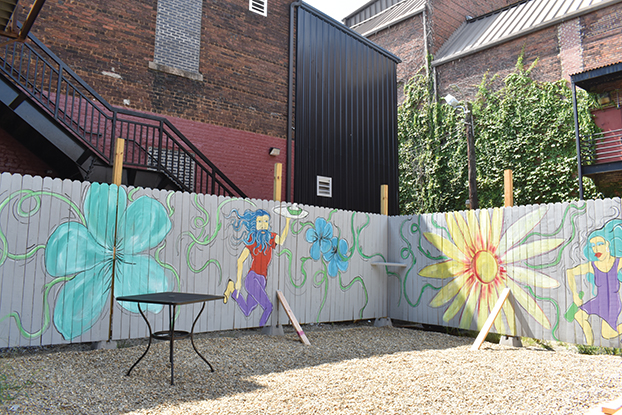 SALISBURY — Right now, there’s only a painted fence and some gravel, but Heather Teeter has big plans for the space behind her restaurant.

The co-owner of Sweet Meadow Cafe on East Fisher Street is working to transform the vacant alleyway behind her restaurant into a charming outdoor dining area. Teeter has always loved the idea of adding more outdoor space to her restaurant, but the COVID-19 pandemic forced her hand.

“When COVID happened, it put me in sort of a necessity situation,” Teeter said. “I wanted to make sure my customers feel very safe coming here and outside seating is one of the safer situations as recommended by, well, everybody.”

Teeter’s original idea was to add several tables and chairs to the sidewalk in front of Sweet Meadow. After examining the sidewalk and determining that the additional seating wouldn’t provide enough space for walkers, she had to adjust her strategy.

“I would absolutely adore being able to put some tables on the sidewalk,” Teeter said. “Unfortunately, due to zoning restrictions and the depth of the sidewalk, that’s not feasible. At least, that’s what the city is telling me. We’d love to put some tables and umbrellas out the front door. That would be ideal. But it’s not a situation we’re finding ourselves in.”

Teeter has been able to add storefront seating to her restaurant when it was located elsewhere, but the smaller sidewalk at her Fisher Street location wouldn’t allow it under the city of Salisbury’s standards. For permanent sidewalk seating permits, businesses must also leave 5 feet of space on the sidewalk for pedestrians. Instead, she leased space in the alleyway. Since taking over the space, Teeter has installed a fence and added gravel to level out the ground. While some work has been done on the alleyway, delays in delivery times for tables and chairs have prevented her from opening the outdoor space to diners.

Teeter isn’t the only local restaurateur who is finding creative ways to utilize outdoor space for seating. She’s also not the only restaurant owner who has faced obstacles while doing so.

Adding tables and chairs outside her front door has been a process for Mean Mug coffee shop owner Evelyn Medina. In order to receive a permanent permit for sidewalk seating, downtown business owners must go through an application with the city of Salisbury’s Development and Code Services Division. That process isn’t strenuous, but Medina does think that it could be streamlined.

“If you are a business owner you have to have outdoor insurance for the outdoor dining, you have to pay a $10 charge, but you also have to provide a site plan that shows the city where your outdoor dining would be located so that we make sure it doesn’t impede sidewalk traffic,” said Jessica Harper, a development services specialist with the city of Salisbury. “It’s really simple as long as you have the application.” 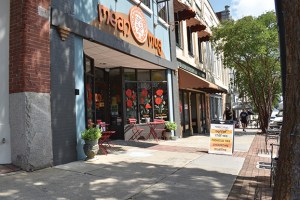 The hot weather has prevented many patrons from utilizing Mean Mug’s existing outdoor seating, but Evelyn Medina believes that could change in the fall.

For permanent sidewalk seating permits, businesses must also leave 5 feet of space on the sidewalk for pedestrians.

The Salisbury Development and Code Services Division is interested in streamlining the review of an application for sidewalk seating that is only temporary, said Teresa Barringer, the city’s development services manager.

“To my knowledge, we’ve not had anybody call and ask for a temporary permit during the pandemic, but we may look at that differently,” Barringer said. “We’ve allowed other things to take place without permit requirements as a result of temporary pandemic conditions. We’ve allowed some curbside pickup for downtown businesses who need that to serve their customers.”

“Most small businesses may not have that amount and that would incur another cost in adding that type of coverage,” Medina said. “I can see where, if someone falls, the city wants to make sure that they’re not liable. I understand where they’re coming from. It’s just that, in the middle of a pandemic when we’re all trying to stay afloat, it could be a hindrance.”

Mean Mug coffee possesses the necessary insurance policy to gain approval for outdoor seating, which Medina hopes to expand. Although Medina’s existing few outdoor tables and chairs haven’t been heavily used lately, she thinks that could change as the weather begins to cool down. Other restaurants are counting on the same thing. 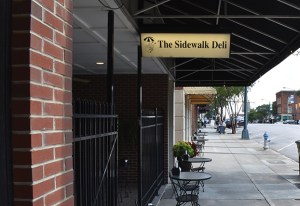 The Sidewalk Deli has expanded its outdoor tables down the Main Street sidewalk to leave plenty of room for pedestrians.

Sidewalk Deli has several tables and chairs outside its front doors under an overhang, but the restaurant has also added additional seating on the sidewalk extending down in front of a currently vacant storefront next door. At first, the tables extended further into the sidewalk. Then, a Salisbury code enforcement officer asked Sidewalk Deli to move them closer to the building.

“We had one person call and mention and we had code enforcement stop by and they just told us we couldn’t have them too close to the road,” James said. “We just adjusted and put them in front of the vacant store next to us.”

James has noticed that customers have had a larger appetite for enjoying a meal outdoors. He thinks the trend is here to stay.

“I think the transition will be after this whole thing clears up, more people are going to want to sit outside in general,” James said.

Teeter hopes to have Sweet Meadow’s new outdoor seating area ready by the time cooler weather sets in. She’s already had local artists paint colorful flowers on the fence in order to recreate the eclectic vibe that’s captured inside the restaurant.

“We’re hoping that our customers will enjoy it, make use of it,” Teeter said. “God bless if someday things go back to normal, we’ll put more tables out there and more tables inside and we’ll have a grand old time with all of it.”