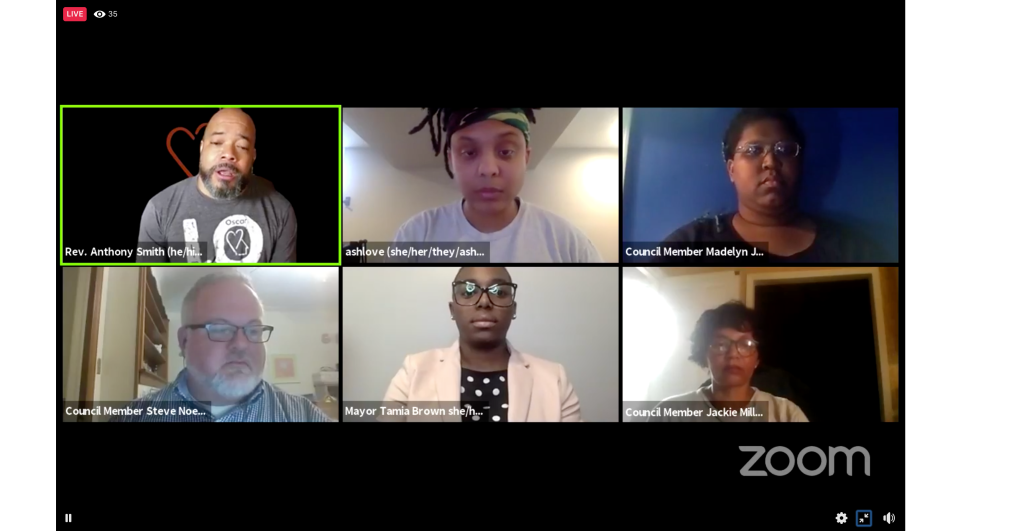 SALISBURY — A group of local activists gathered Tuesday night for a mock city council meeting to talk about racial equality and police brutality discussions in the city.

The mock council meeting was hosted by “The Peoples Assembly: Salisbury Edition” on Facebook Live. The council included Tamia Brown as mayor, Rev. Anthony Smith as city attorney, local artist Ash Love as city manager as well as Jackie Miller, Madelyn Jones and Steve Noell serving as council members. Another local, Tasha Brown, was considered a council member but was unable to attend the meeting.

Love said imagination and creativity, the idea behind the mock meeting, can serve as vehicles for change and activism. Additionally, it can serve as a form of protest and vision for what locals want their community to be.

“The use of imagination prepares us for liberation,” Love said.

The meeting didn’t begin with the reciting of the Pledge of Allegiance. Instead, there was a land acknowledgment from Noell about the original owners of the land the meeting was being held — the Catawba Indian Nation. He said the land has been exploited by white supremacy and ongoing colonialism, he said. Catawbaindian.net, the official website for the Catawba Indian Nation, states that the tribe lived along the banks of the Catawba River dating back at least 6,000 years, and that it’s believed the nation inhabited most of the Piedmont area of South Carolina, North Carolina and parts of Virginia.

Smith said his interpretation of the land acknowledgment in place of the pledge is that people are still waiting for the day that America is America for everyone.

The first issue discussed was banning the use of chemical agents.

The issue of banning chemical agents, like tear gas, was discussed at length during an Aug. 4 Salisbury City Council meeting following a presentation of camera footage of a June 1 protest where tear gas was used to disperse protestors. Mayor Pro Tem Al Heggins proposed the ban at the meeting, and a divisive discussion ultimately led to no action taken on the matter.

Salisbury Mayor Karen Alexander and council member David Post voiced opposition in banning the chemical agents at the Aug. 4 meeting, with Alexander stating law enforcement must use it to control “unacceptable behavior” during protests, and Post concerned with diminishing the morale of the police department and city staff.

At the mock meeting, Miller said there is a difference in how Black and brown people are treated during protests and that they’re more likely to be tear-gassed or pepper sprayed at protests than white people. She said the ongoing pandemic should be considered when using chemical agents and that the “form of torture” wouldn’t be used on a pet. So, why a human being.

Noell said there’s currently no oversight, beyond the industry itself, to regulate what’s in the chemical agents. An article from the Associated Press confirms that. The AP reported that a review of U.S. government-funded scientific studies revealed “there is no government oversight of the manufacture and use of tear gas. Instead, the industry is left to regulate itself.”

After a unanimous vote in support of the ban during the mock meeting, Noell made a motion to dispose of the chemical agents in an environmentally conscious way, which passed favorably.

Also at the mock meeting, the council voted to refer to local law enforcement as “public safety workers” rather than police officers.

“Words mean things in this case,” Noell said, adding that the word “police officer” often has a negative connotation.

Jones said changing the name could facilitate conversations about what the community expects of its law enforcement officers and that the job description and training required could be altered with the name change.

Miller said the rebranding could lead to discussions regarding the reallocation of funds and responsibilities of law enforcement officers. She added that money is lost when officers respond to cases where other professionals such as mental health or social services workers would have been more effective.

Throughout the meeting, Smith referenced a reparations bill as a source of funding for the council to use in its equity proposals. House Resolution 40, which has been stalled in the U.S. House since June 2019, calls for the establishment of a commission to study and develop reparation proposals for African Americans.

Another discussion at the mock meeting involved the renaming of local streets that honor Confederate soldiers.

“We no longer want or need to live in the shadows of inequality and hate,” Miller said, adding that not all street names currently represent the entire Salisbury community.

Jones said renaming the streets for those who fought for civil rights and racial equality following the Civil War would be a way to honor the history of the nation by glorifying those who made changes for the better.

Local citizens have some power with this issue as they can petition for name changes by submitting a Road Naming Petition to the county Planning Department or city government, which would then turn it over to elected officials for a decision.

The last item on the agenda at the meeting included the establishment of community forums aimed at reviewing all institutions to eliminate racial inequity. Jones said the issues shouldn’t focus solely on Black and white people, but rather, all minorities and people-of-color. Miller added to include the LGBTQ community as well.

“We can’t fix people, but we can fix our systems,” Miller said.

Following the meeting, Smith said council members did their homework ahead of time and spoke with other community members to gain multiple perspectives on the issues discussed.

He also encouraged the local community to become registered voters and vote, adding that voting is a form of activism.

The full meeting can be viewed here.