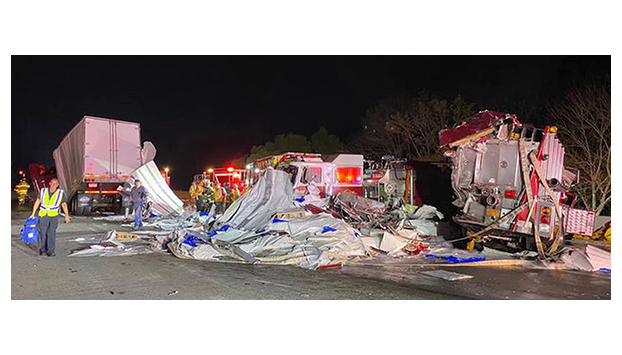 A tractor-trailer collided with three Miller’s Ferry firetrucks early Tuesday morning and then the cab ignited into flames. The driver, Nealido Ortiz, of Greensboro, received significant burns. Firefighters were responding to an unrelated incident and were not injured. Submitted photo

SALISBURY — One man is in critical condition and three fire trucks received significant damage after a collision early Tuesday on Interstate 85 South.

First Sgt. G.A. Barger, of the Highway Patrol, said a tractor-trailer at about 4:15 a.m. struck three stationary vehicles owned by the Millers Ferry Fire Department that were in the rightmost lane near the 82 mile marker. The crash pushed the fire trucks into one another. No firefighters were injured.

The tractor-trailer came to rest in the second lane and caught on fire. The male driver, whose name was not immediately released, was trapped inside and received second- and third-degree burns. He was removed from the vehicle by firefighters and transported to Novant Health Rowan Medical Center before being airlifted to Wake Forest Baptist Hospital in Winston-Salem, Barger said.

“He was very badly burned. He has second- and third-degree burns over a lot of his body,” Barger said.

If the man makes a recovery, Barger said, he will face charges. The cause of the accident was either inattention or that the man fell asleep, particularly because the tractor-trailer did not move over for the stopped firefighters. Barger said there were marks on the road indicating that the man braked just before striking the fire trucks.

The firefighters from Millers Ferry and two Davidson County departments were stopped to help another truck hauling two trailers that caught on fire. The fire trucks were parked to shield the vehicle they were assisting as well as fire personnel.

Barger said the trucks had been on I-85 South since around 2:30 a.m. — when the first truck caught on fire and pulled onto the shoulder near the Yadkin River Bridge. There was no one injured in that incident.

Barger said it’s important for people to move over to another lane when they see firefighters or law enforcement pulled onto the side of the road.

“Our interstate here has four lanes. Get as far over as you need,” Barger said. “It’s the law, and it’s also good commonsense. Move over away from the incident.”

Hours after the accident and into the late morning, I-85 remained shutdown.