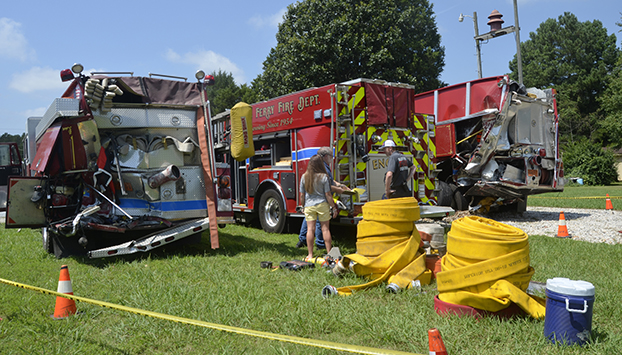 Miller’s Ferry Fire Chief Josh Fox looks on as three of the fire department’s trucks are being assessed for damages. The trucks were struck by a tractor-trailer early Tuesday morning on Interstate 85. No firefighters were injured but the driver received significant burns. Shavonne Potts/Salisbury Post

SALISBURY — A 50-year-old Greensboro man was seriously injured early Tuesday morning when the tractor-trailer he was driving on Interstate 85 struck three fire trucks responding to an unrelated incident.

Nealido Ortiz was traveling southbound around 4 a.m. when collided with the back of a fire truck parked in the outside lane, according to N.C. State Highway Patrol Trooper J.P. Page. Charges are pending for the driver who failed to reduce speed or move over, Page said.

Firefighters were able to remove Ortiz, who is a driver with Believe Transport, from the tractor-trailer that became engulfed in flames. First Sgt. G.A. Barger told the Post Ortiz was trapped in the truck and received second- and third-degree burns. He was taken to Novant Health Rowan Medical Center and later transferred by air to Wake Forest Baptist Medical Center in Winston-Salem.

He added that the cause of the collision was either inattention or Ortiz fell asleep because he did not move over for the firefighters who had stopped on the roadside.

“We took a catastrophic hit today,” Fox said. “We’ve got three of our primary trucks that are going to be out of service for months or closer to a year.”

Those trucks, two engines and a tanker, initially responded around 2:30 a.m. to the 8200 block of southbound I-85 for a tractor-trailer with a fire in the rear.

Fox said fire crews from both Miller’s Ferry and Churchland fire departments had just extinguished the fire and were “starting to deescalate the incident” when the second tractor-trailer struck the fire trucks. Fox said the Millers Ferry department was lucky that no firefighters were injured. Once all of the firefighters were accounted for and safe, Fox said, crews helped Ortiz.

“This is why we push the importance of slowing down at emergency scenes and yielding to first responders, letting us do our jobs so we can go home safe to our families as well,” Fox said.

Typically when there is a roadside incident, Fox said, fire crews stagger truck positions to shield firefighters and the people to whom they’re rendering aid. That aims to put traffic as far away from the immediate incident as possible.

The tanker was the first truck struck and the crash unfolded like dominoes, with the second truck pushed into the third fire truck.

Right now, Fox said, the department is in the process of having the trucks assessed for damage.

Southbound lanes were closed north of the Yadkin River Bridge for hours on Tuesday. Traffic was detoured in multiple directions and caused significant traffic delays. The road was reopened around noon.