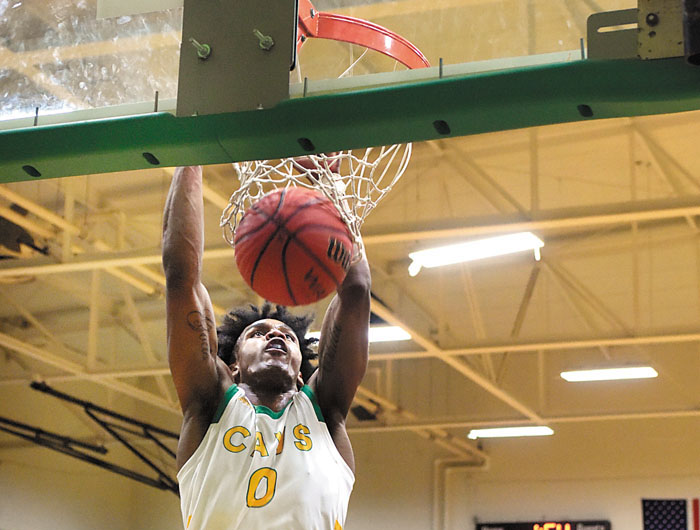 North's Brevin Goodlett dunks during a game against Carolina International in 2019. photo by Wayne Hinshaw, for the Salisbury Post

COVID-19 tried to detour him, but it couldn’t stop him, either.

The 6-foot-3 Goodlett has signed with Division II Bluefield State, the Big Blues.

“Right now, it just feels good to get a full ride somewhere,” said Goodlett, who will have four years of eligibility with the Big Blues.

Goodlett is happy with where he’s headed, but the pandemic that shut down campuses did limit his options.

“There were several campus visits that had to be canceled,” explained Goodlett, who said other potential landing spots had included USC Aiken, Erskine and even D-I Gardner-Webb.

Goodlett played on the postgraduate team at Franklin Prep Academy in 2019-20 and averaged 18 points and 11 rebounds. He was scheduled to play in a prep school all-star event back in March, but that was canceled by COVID-19 concerns.

“I had a good season at Franklin, and that all-star game would’ve been a good showcase for me,” Goodlett said. “It’s been a tough time for athletes who want to be recruited. COVID-19 has made a big impact on a lot of us.”

Goodlett had a terrific senior season for North Rowan coach Jason Causby in 2018-19. He had a 33-point outing for that 28-3 squad against Albemarle, and in one sizzling stretch of Yadkin Valley Conference games he topped 20 points in six of seven contests. He was named Yadkin Valley Conference Player of the Year and was runner-up to teammate Dayjuwon Cooke for Rowan County Player of the Year honors. Goodlett was a second team all-district pick by the North Carolina Basketball Coaches Association.

Goodlett was Rowan’s leading scorer as a senior with 18.8 points per game and tallied 1,313 points in his career.

Goodlett gets high marks from coaches on intangibles as well as tangibles. He’s not thick, but he’s wiry strong. He’s athletic, as far as running and jumping and quickness. He’s coachable and has built a reputation for playing hard on the defensive end. The only question about him coming out of high school was making the transition from high school forward to college guard. Those are the skills he worked on during that year at Franklin Prep Academy.

“Ball-handing and spot-up shooting are the two things I’ve improved on the most since high school,” Goodlett said. “Franklin also was good for me as far as being on my own for the first time. All in all, it was a great experience.”

Local coaches put in a good word for Goodlett with Bluefield State and helped him get recruited.

Goodlett, a solid student who hopes for a career in physical therapy or business, looks forward to playing for Price, as soon as the sports world returns to normal.

“High school was a lot of fun and I do miss those times,” Goodlett said. “But now it’s time to look ahead. I want to show what I can do.”