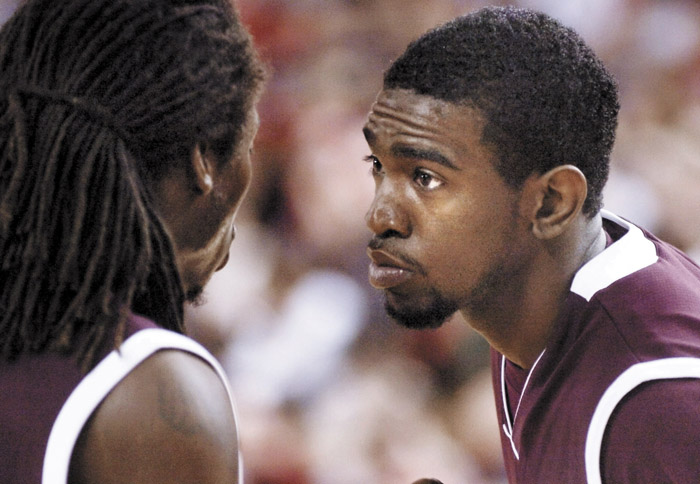 College of Charleston freshman Junior Hairston listens to a senior teammate as they come out of a timeout. File photo by Joey Benton, Salisbury Post

SALISBURY— When they hang out in dorms and apartments, college basketball players tend to start bragging about high school careers.

In his days at College of Charleston and Towson University, James “Junior” Hairston just smiled whenever that sort of conversation erupted.

He knew he’d eventually get in the last word.

“Well, I won my last 61 games in high school,” the 6-foot-8 Hairston would say. That always brought an end to the discussion.

In high school at West Rowan, Hairston played three seasons with legendary teams and with legendary teammates, and he played for legendary coach Mike Gurley’s 3A state champions in 2001-02 and 2002-03. It sounds like fiction, but those two teams really did combine to win 61 in a row.

“People would get excited if we almost lost,” Hairston said with a laugh. “We almost lost to East Rowan one time and we heard about it for weeks. But we didn’t have many almosts. It was usually over by the third quarter. The toughest competition those 61-0 years came in practice. There was Donte Minter, my junior year, and Phillip and Jason Williams my senior year. We’d beat each other up in practice. We competed like crazy in practice and blocked each other’s shots in practice. We battled and we fought and we grinded. When it was time to play the games, it got easier.”

It was tougher for Hairston after he was on his own, without all those other tall guys to lean on, but he found his way. He followed the basketball dream from Fork Union Military Academy to College of Charleston to Towson University, and then he trotted around the globe to Chile, Turkey, Iceland, Australia, Finland and the Netherlands.

Not many people can say they racked up a 41-point game in three different countries, but Hairston says he accomplished that feat. He had cheerful 41s and angry 41s, but 41s are 41s. That’s a lot of points.

There was a season in Iceland in which Hairston was second in the league in rebounding and led the league with 3.7 blocks per game. In 2013, Hairston averaged 21.8 points and 12.6 rebounds. He remembers a game with 30 points, 19 rebounds and nine blocks. He recalls averaging 35 points per game in the playoffs to carry his team to the finals.

Hairston played his freshman season on the varsity at Lexington High and performed well, but he transferred to West Rowan prior to his sophomore season, adding his talent to an already powerful group that included Scooter Sherrill and Donte Minter, both of whom would score more than 2,000 career points. Hairston scored 1,248 points in high school, with more than 1,000 coming at West.

He gets a lot more excited talking about West’s 2003 championship than the one in 2002.

“Thatfirst championship was great, but the second one was much sweeter for me,” Hairston said. “We had Donte to lead us in that first one, and he was a great player, but then it was time to show people we weren’t just one-year wonders. People said we couldn’t do it again, not without Donte, but we went out and got another ring. I was MVP in the regional and in the state championship and Rowan County Player of the Year, so I went out with a bang in 2003.”

A post-graduate year at Fork Union Military Academy was next. Fork Union did great things as far as maturing Minter, who went on to play at Virginia and Appalachian State, but FUMA had a tougher time molding Hairston, a non-conformist who had a rebellious streak.

“I thought when I got out of high school I was done with people telling me what to do,” Hairston said. “Fork Union is a great school and we had a wonderful basketball coach (Fletcher Arritt) but I hated almost every day I was there. I was there to play basketball, and all that discipline that was fine for some people, just wasn’t for me. That year was rough. Every time I called my mother I was in tears and told her I was coming home. On the court, I was always angry and always frustrated and so I took it out on my opponents. The only good thing about that year is that being on my own and having to deal with so many things I hated made me a tougher person.”

There was plenty of recruiting interest because Hairston had an unusual skill set. He was long and could defend multiple positions. He had a lot of quickness and athleticism for a 6-8 player. He was quick off his feet, which made him a relentless rebounder despite a thin frame.

He picked College of Charleston, but it didn’t really work out there for Hairston with coach Tom Herrion.

Herrion preferred to call him J.R. because he didn’t believe that Junior was a grown-up name.

“Division I basketball was eye-opening,” Hairston said. “They had a group of older guys at Charleston who weren’t more talented basketball players than I was, but they had more experience and they were much more physical.”

He was a frustrated reserve in his two years in Charleston, playing 10 minutes per game.

“A lot happened,” Hairston said. “They’d say my braids were too long and they’d always want me to get a haircut. I still had a lot of rebel in me then, and I didn’t play as much as I wanted to, but I never lost confidence that I could play. I played against Auburn and scored 10. I played against Coastal Carolina and got 12 rebounds.”

He transferred to Towson for his last two seasons. The connection was coach Eric Skeeters, who is now the head coach at Delaware State. Skeeters had worked hard to recruit Hairston while Hairston was at Fork Union and Skeeters was an assistant at Virginia Tech. Then Skeeters had joined the Towson staff. He hadn’t forgotten Hairston and he was reminded of what Hairston could do when he turned in one of the stronger games of his College of Charleston career against Towson.

Hairston had to sit out the 2006-07 season, but he knew he was fortunate to get a fresh start at Towson, a few minutes away from Baltimore.

“Towson was probably the only D-I school I could have transferred to,”  Hairston said. “I went up there right after my mom had passed and I was determined to graduate and make her proud. That redshirt year I had up there, I never stopped working. I was going to be ready for that second chance. I was going to get every rebound.”

He recorded double-doubles in eight of his first 13 games.

Towson competed with some strong clubs in the Colonial Athletic Association.

“We played schools like Virginia Commonwealth and George Mason, and I had my battles with George Mason’s Will Thomas, who was an outstanding player,” Hairston said. “I always had to bang with much bigger guys. I had a smaller frame and weighed 205 and I was usually matched up with guys who were 230. But I always believed I had the advantage on the offensive end because of my speed and my ability to do things with the ball. I could score, but my  goal was to rebound and stay active on defense. I impacted every game I ever played in with rebounding and defense. Kids need to understand that if you rebound and defend, the coach doesn’t have any choice other than to leave you on the court. Points sell the tickets, but don’t be that one-trick pony, Lock in all the facets of the game and be that dude that fills the stat sheet. I was locked in at Towson, and I discombobulated some people with my defense.”

Hairston remembers that early in that junior season he was dueling with Oklahoma’s Blake Griffin for the national lead in rebounds, but the injuries piled up.

“I was having monster games, but then I suffered a hip pointer in a game with William & Mary,” Hairston said. “I kept on playing, but my stats started going down. Then I got undercut on a fast break and landed on my back and re-injured the hip. But I tried to tough it out. I still made all-tournament and guys from Towson don’t normally make all-tournament.”

Despite the setbacks, he averaged 12.0 points and 8.9 rebounds. He was third in the league in rebounds and fourth in blocks.

As a Towson senior, he averaged 13.0 points and 7.4 rebounds. He was third in the league in blocks and fourth in rebounds. His fondest memory of that season is a game Towson played at UNC Wilmington, even though Towson dropped it in overtime. Hairston had 25 points and 15 rebounds.

“What made that one special is I had so many family members there,” Hairston said. “They didn’t get to see me play much, but a lot of them made the trip to Wilmington and I had a good game for them in a crazy atmosphere. I got into a rhythm and couldn’t miss.”

Hairston amassed 763 points in two seasons at Towson. He recorded 16 double-doubles — and three technicals. He brought emotion to every arena he entered. Just as was the case in high school, you loved him if he was on our team, and you hated him if he wasn’t.

His nine seasons of pro ball overseas brought the usual mixed bag of triumph and tribulations that American hoopers faced.

“Worst experience, by far, was in Chile, where I didn’t have hot water in the hotel for two months,” Hairston said. “That was horrible. My last game in Chile was one of my 41-point games. I was angry and frustrated. I didn’t want to lose my mind in Chile, so I had to get out of there. It got better. A lot of the places I played, it was a wonderful experience.”

He remembers a 41-point outing in Australia in which he only missed three shots.

Hairston is 35 now, happily married. He has three sons and two daughters.

He plays in a league in Charlotte, still dunks a lot, but while the rebel has mellowed some over the years, he puts some fire into his job as a trainer and molder of young talent in the Lake Norman area.

“Too many kids want to play video games,” Hairston said. “I tell them to get outside and play and work on their games. If you’re going to play basketball you should have the goal of playing in the NBA. Growing up in Lexington, if I’d taken a break from the court when it was hot in the summer and gone inside to watch “The Price Is Right” I wouldn’t have had a spot when I went back. So I didn’t take any breaks. I played and played.”

When people see him out and about, the 61 straight wins at West Rowan almost always enters the discussion.

That’s a conversation he doesn’t mind having. It was mind-boggling stuff.

“I tell people that they can take any team from any time and any school in Rowan County, and we were the best,” Hairston said. “That team competed so hard that even after we had won 60 in a row, we still felt like we had something to prove when we went after 61. We didn’t just have talent and size, we knew how to play and we knew how to compete. We earned everything we got. No one can ever take it away from us.”