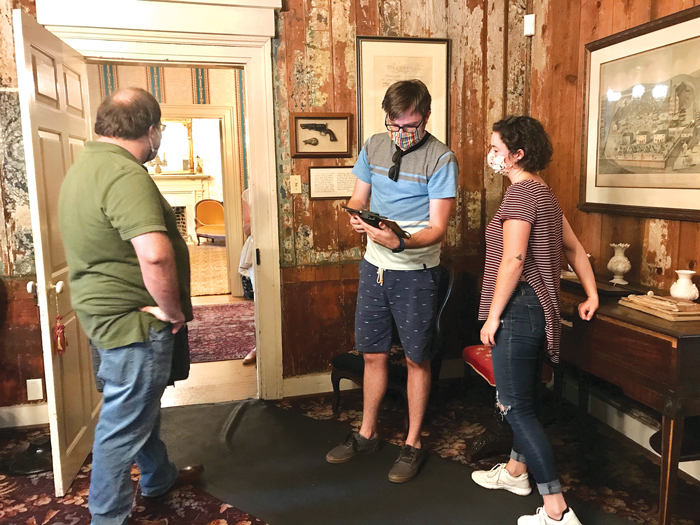 Photo submitted - From left is Taylor Hutchins, Daniel Waters and Hannah Addair from DKM media, which is helping the Historic Salisbury Foundation put together a digital tour this year.

SALISBURY — With a virtual edition of its annual OctoberTour, the Historic Salisbury Foundation will provide a glimpse into buildings that wouldn’t usually be feasible for in-person viewing, says Executive Director Sada Stewart.

One of those buildings is the Bell Block Building, at 133 South Main St. The building, built by David Gaskill in the late 1800s as an investment for his aunt, operated as a tobacco factory in Salisbury. It features brick construction with granite native to Rowan county on its front facade. It has full-story windows on the second and third floors, with arched windows on the third floor.

And while the building has an elaborate interior stairway, it wouldn’t be feasible for an in-person tour — for fire safety and social distancing reasons — Stewart said.

Today it’s home to the Thread Shed on the first floor and has been owned and operated by the Loflin family since they purchased it from the Historic Salisbury Foundation in 1981.

This year, the building and others on the tour will be displayed online via a website offering an interactive tour that will contain information about the tour sites. By working with Salisbury-based DKM Media Group, the website will provide a 360-degree look into the home with options to move throughout the buildings with audio or visual pop-ups.

The website will feature four private homes, two downtown Salisbury buildings and the Hall House museum. It will be available to the public for a limited time only — from the evening of Oct. 9 to 11.

“It’s going to be almost like you’re in the room,” Stewart said. “We knew that OctoberTour wasn’t going to be able to look the same and we wanted to be safe and healthy moving forward in the COVID reality that we’re living in right now.”

The foundation will have a Patrons Porch events that comply with social distancing and gathering guidelines. While the name hints at the fact that it’s usually held on someone’s porch, this year’s Patrons Porch will be at the Salisbury Station during OctoberTour. Tickets will be required.

“There are lots of elements of the traditional tour that we wouldn’t get to do,” Stewart said. “There’s been a learning curve in how creative we can be for the virtual tour. That being said, this has also been really fun. We’ve never done anything like this before.”

OctoberTour generates a significant part of the operating budget for the Historic Salisbury Foundation, which has a missing of preserving, protecting and revitalizing the historic fabric of Salisbury and Rowan County. But Stewart said she didn’t feel comfortable making the OctoberTour website password-protected — only allowed entry to those who pay. So, the foundation is encouraging viewers to make a donation in advance and inquire about sponsorship opportunities, which are still available.

“We didn’t want to just not do anything, but we also didn’t feel right about requiring a ticket price and it being password-encrypted,” Stewart said. “This is going to be something new and different. We want to provide people with an experience who may not normally get to experience OctoberTour.”

In particular, people who are Historic Salisbury Foundation members or Salisbury natives and live in other states will be able to participate in this year’s tour.

“This is going to be their first chance to really enjoy it,” Stewart said.

Donations can be made before, during or after the tour via the Historic Salisbury Foundation website under the “support” tab. For donation or sponsorship opportunities, people can also contact the foundation at 704-636-0103 or by emailing events@historicsalisbury.org.

The foundation will also create an OctoberTour-themed scavenger hunt, modeled on a similar one offered during the stay-at-home order in April.

“In April, we were specifically thinking about parents who had to homeschool their kids for the first time and educational ways to entertain children,” she said. “We’re going to expand that to OctoberTour, and use our locations as a scavenger hunt.”

For more information about the Historic Salisbury Foundation’s 2020 OctoberTour, visit octobertour.com. The full list of tour sites this year is as follows:

In 1905, A.G. Peeler opened Bamby Bakers. The bakery expanded into this two story addition, designed and built by Wagoner Construction in the late 1950s. By then, it was a retail and wholesale operation. Bamby merged with Flowers Industries in 1969.

Bread production ceased in 1986, and the company closed permanently two years later. In 1997. Years after the bakery closed, the city of Salisbury purchased the 43,000 square foot building as a downtown redevelopment project. Two couples each purchased a half of the building in 2005 and began restoration projects, keeping with the industrial aesthetic of the space, with apartments upstairs and art studio/gallery space downstairs.

Half of the building was recently purchased and completely transformed into a yoga/wellness/kitchen space with a demonstration kitchen, therapy services and studio space.

Robbie Snider, a fireman for Southern Railway, had this one-and-one-half story frame bungalow built in 1925. This house, complete with board and batten siding has the overall feel of an English cottage. That said, its dominant architectural features are of the bungalow style. Combinations of those two styles were popular during the 1920s and ‘30s as Spencer’s development matured and reached beyond the early town grid.

The house was renovated by the previous owners in 2010. Its current owners have continued to make improvements. They are avid collectors of eclectic art and antiques as well as memorabilia related to the house and the railroad.

Claude was the vice president of the Salisbury Cotton Mill. Emma, a founder of the Rowan Public Library, started the first adult education program in Rowan County and held classes at the mill. A granite paver driveway, large yard and spacious front porch welcome visitors to the residence.

Following a fire in 1930, a bay window and sunroom were added to the original floorplan. The wood shingles were replaced with terra cotta. The current owners purchased the property from the Morris’ grandson in 2011 and have undertaken extensive interior and exterior renovations.

Dr. Ernest Stokes, the resident surgeon at Salisbury’s first modern hospital, known as the Whitehead-Stokes Sanatorium, built this colonial revival-Style frame house in 1919. The home was enjoyed by the Snider family for 59 years and features ionic-columned entrance porch, dentil cornice and a pediment dormer. This home was located on the site of the Salisbury Male Academy, later known as the Shober House.

The current owners completed a full restoration and operate Across the Pond Bed and Breakfast in the home.

Beginning in 1936, zoning rules allowed for the conversion of this Queen Anne home to a funeral parlor, an arrangement that lasted until 1975. The home was about to be demolished to accommodate a parking lot for the Fairmont Terrace apartments when it was purchased and converted back to a single-family dwelling. Since then, three successive owners have undertaken extensive interior restorations to reconfigure the home.

The current owners purchased the property in 2005 and immediately worked with local craftsman to extensively renovate the kitchen and make structural repairs.

The original Salisbury Academy closed after five years of operation, and the building was sold. Rebecca Troy and her half-brother, Maxwell Chambers, lived in the house for fourteen years, until her marriage to Judge David Caldwell. It was then sold to the Sheriff of Davie County, N. S. A. Chaffin, who used the property for rental income.

In 1859, Dr. Josephus Hall purchased the property from Sheriff Chaffin and added a two-story front porch with cast iron oak leaf and acorn ornamental openwork, a gateway arch and square-edged clapboard. The ironwork was ordered from St. Louis, where Hall lived for some time while helping to establish several medical schools. Salisbury blacksmith Peter Frerck installed the ironwork for Hall. The front windows were also lengthened.

During the Civil War, Hall served as hospital surgeon and surgeon in charge at the Salisbury Confederate Prison.

Between 1890 and 1910, the attic was enlarged with a high-hipped roof and dormers. The Historic Salisbury Foundation purchased the home and contents in 1972 from the Hall family, which had continuously occupied the residence for 113 years. A two-room detached kitchen was restored over a three-year period and opened to the public in 2006.

Spacious grounds contain an herb garden and antique rose garden as well as many old-growth trees and shrubs. The cannon on the front lawn once guarded the Salisbury Confederate Prison. The site is open for guided tours on weekends from March through December and features special exhibits, guest speakers and programs.

In Summer 2019, the movie “The 24th” was filmed in various locations around Salisbury, including the Hall House. The house celebrated its 200th anniversary in May.