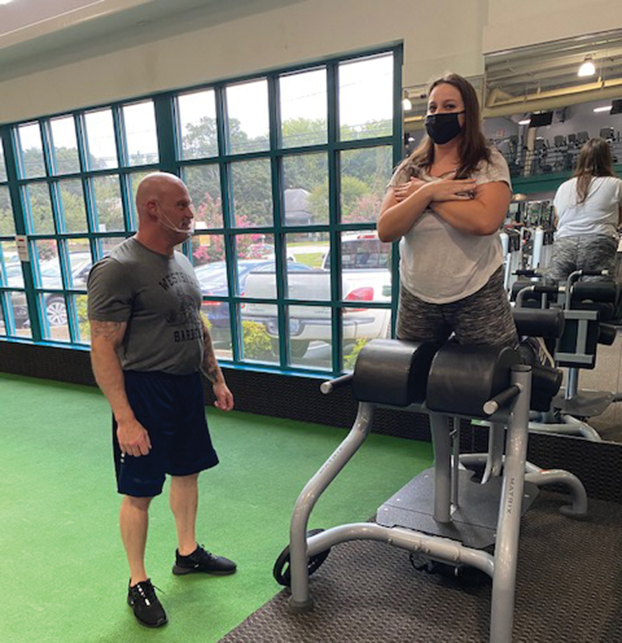 Submitted Photo - Personal trainer Rijkent Zwaan instructs Emily Latta while she works out at The Forum.

SALISBURY — After a foot injury left him recliner-bound for two years, the muscles in John Reeves’ once-strong legs had atrophied.

His legs had deteriorated to the point where he struggled to stand while doing necessary, everyday household tasks. Reeves said that changed after he began exercising. And his gym of choice was The Forum, a local gym that has been operating in Salisbury for over 20 years.

“I’ve done two extensive leg workouts and my legs were strengthened just from going to The Forum and using their machines,” Reeves said.

Reeves started going to The Forum two weeks ago and says he’s seen enough improvement in his leg muscles that he’s been able to stand for sustained periods of time. Like all gyms in North Carolina, The Forum is still technically closed to the general public under the rules of Gov. Roy Cooper’s phase two COVID-19 plan. On Wednesday, Cooper extended the phase two order through Sept. 11.

However, patrons such as Reeves can still exercise at the facility as long as they are prescribed or directed to do so by a licensed medical professional. This is in accordance with guidance from the North Carolina Department of Justice and Department of Health and Human Services.

The medical exception to Cooper’s phase two order was put into place in June, allowing The Forum to partially reopen after months of being completely closed. The Forum closed voluntarily on March 23, several days before Cooper announced his statewide stay at home order on March 27, and one day after the second man to test positive in Rowan County told the Post he began feeling weak while working out at The Forum. The Forum remained closed until June 15, when the medical exemption went into effect. 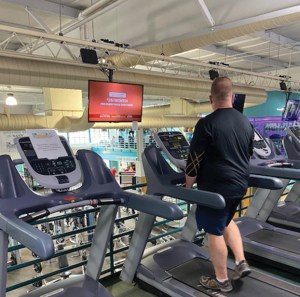 Photo Submitted – A patron of The Forum takes advantage of the medical exception that allows people to use indoor gyms with a doctor’s prescription or direction.

During the gym’s temporary closure, co-owner Matthew Marsh said he remembered hearing from customers how difficult it was for them to not be able to work out.

“During that period of time for several months, we were being reached out to from people who were told they needed to exercise from a depression and anxiety standpoint all the way down to an 86-year old who comes in with a mask every day who has diabetes who needs to work out,” Marsh said.

That period of time was especially difficult for Norman Towell. Towell, a former truck driver who has diabetes and arthritis, has long relied on a strict exercise regime to keep his body functioning properly.

“I have to go (to the gym) because I’ve got arthritis in my joints and I have bad type 2 diabetes,” Towell said. “If I don’t work out, everything just goes haywire and I get in real medical trouble.”

A regular of The Forum and Planet Fitness, Towell had nowhere to workout for several months. Although Towell’s son set up a small workout space for him in Towell’s garage, he wasn’t able to get the same kind of exercise he needed to keep his blood sugar levels low.

“All I can say is that I need it,” Towell said. “I hate when the government is getting to where they tell us what we can and can’t do because I thought we had the freedom to do whatever we wanted as long as it wasn’t breaking the law.”

The day after The Forum reopened to those who qualified under the medical exemption, Towell was at the gym.

“I couldn’t get here fast enough,” Towell said. “I love the gym.”

Although the NCDHHS stated that a doctor’s note or written communication needed to be shown in order for someone to use a gym, Marsh said The Forum isn’t asking people to show a physical doctor’s note. Instead, customers are required to sign a waiver attesting that a doctor has directed them to exercise at a gym.

“We have a COVID waiver that every person who comes in has to sign and agree to,” Marsh said. “They’re attesting that a medical professional has either prescribed or directed them to use an exercise facility to help treat their medical condition. They also attest that they have not had a cold, fever or cough within the last 72 hours and they haven’t had contact with anyone being treated for COVID within the last two weeks.” 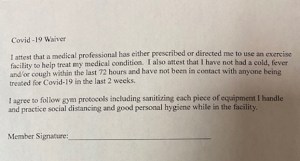 Photo Submitted – The Forum requires customers to sign this waiver before they are allowed to use the facilities.

Numerous gyms across the state have taken a similar stance, saying that they can’t ask patrons for medical details due to the Americans with Disability Act. This has seemingly created a gray area for gym owners.

Along with requiring patrons to sign a waiver, The Forum is complying with health guidelines by encouraging social distancing, enforcing mask usage, limiting capacity and only allowing group exercise outside.

“They clean like I don’t know what,” Towell said. “Everywhere you go there’s always someone spraying down and cleaning equipment. They’re doing their best to keep everything up to date.”

On Monday, the Rowan-Cabarrus YMCA system also started allowing patrons with a medical condition to exercise using their facilities.

“I want to be clear, for us, we’re not looking at this as a reopening by any means,” said Jamie Morgan, the chief operation officer for the Rowan-Cabarrus YMCA. “We’re looking at this as another small nugget that we can provide a small segment of our population that needs an exercise regimen that’s indoors and not out in the heat.”

“We’re not asking why. That’s kind of protected through HIPAA (Health Insurance Portability and Accountability Act), but if you come in with a doctor’s note, we will honor that.”

Morgan said that the six YMCA facilities in Rowan and Cabarrus counties are limited to 10 people in their workout facilities. So, they’ve introduced a reservation system through which members can secure the time and space they need to exercise.

“We do know there are folks that it’s just extremely important that they keep that routine for their physical livelihood,” Morgan said.