Strongest quake in a century felt by Salisbury, Rowan residents 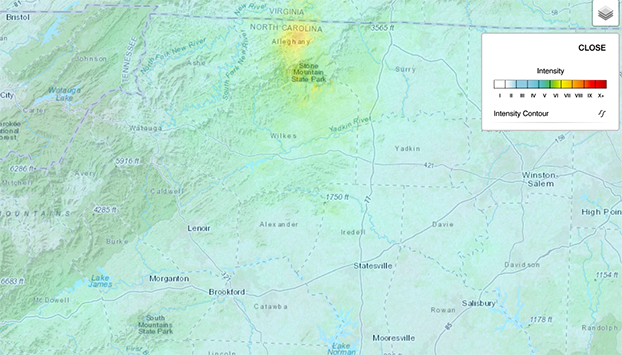 This map from the U.S. Geological Service shows the intensity of the earthquake in North Carolina on Sunday. Orange and red colors indicate a more severe intensity while cooler colors are more mild.

SALISBURY — A 5.1 magnitude earthquake shook Salisbury, North Carolina and areas as far as northeast Georgia in what was the strongest quake in over 100 years.

The epicenter of the quake was in Sparta, a city in the northwestern part of the state and near the North Carolina-Virginia border. The earthquake occurred at about 8:07 a.m.

“There was minor damage in that area and within the immediate area,” said National Weather Service Meteorologist Doug Outlaw.

Outlaw said the National Weather Service had reports and saw photos of cracks in brick walls and shattered windows in Sparta.

Even so, Outlaw said, “This is the strongest quake in North Carolina in over 100 years.” The only stronger one on record was a 5.2-magnitude quake in Skyland, south of Asheville, in 1916. Outlaw said tremors or earthquakes in the eastern part of the U.S. are infrequent.

Outlaw noted a slightly stronger earthquake in Virginia in 2011 that was magnitude 5.8 and cracked the Washington Monument and the National Cathedral.

“It’s not unheard of. It’s very rare to have one this large. We do have them in the area. We often have small quakes,” said Don Blakeman, a geophysicist with the U.S. Geological Survey’s National Earthquake Information Center.

Nilous Avery, of Salisbury, said he thought the rumbling he heard was squirrels in his attic. Avery assumed it was the same issue he had with the squirrels a few years ago. It wasn’t until his wife came into the room and said the bed was shaking.

“I put my hand against the wall and the light bulb shook. Then my wife said, ‘Are you alright?'” Avery recalled.

Avery said he also considered whether the shaking was an airplane flying too low overhead.

“It felt unusual,” Avery said, but it was “real quick.”

He discovered the source of the shaking — the earthquake several counties away — by seeing posts by a weather forecaster on social media. Avery recalled feeling a tremor in North Carolina about 20 years ago. He said it was much smaller. He also has a relative in Georgia who felt the quake and his brother in Greensboro told him he felt it.

“I never experienced it like this before,” Avery said.

The word of the earthquake spread rapidly via social media, including locals who said they felt shaking in Woodleaf, Mooresville and Glendale Springs.

One woman said via Twitter that her family was camping at Raccoon Holler in Glendale Springs and headed back to Rowan County when the family’s camper shook. Others said they were awakened to their beds shaking.

Starneshia Harris said she was lying in bed and felt it moving.

“To be honest, I thought it was something underneath my bed, like an animal,” Harris said.

She called her mother — not knowing it was an earthquake.

“She already knew it was an earthquake. She was laughing at me,” Harris said, adding that she hadn’t previously experienced an earthquake.

Harris said it took time to calm down. And she soon wondered if another quake would happen.

The earthquake is considered moderate, and Blakeman said smaller aftershocks were expected.

Those aftershocks could continue into next week. Blakeman added that prior to Sunday’s rumble there were at least four foreshocks the day before and hours earlier on Sunday. The largest of this weekend’s precursors, or foreshocks, was a 2.6-magnitude.

“They could happen days or weeks after. It’s generally tied to the main shock. I wouldn’t expect these to go on for months. They tend to taper off.”

Ultimately, it’s hard to predict an earthquake, but there is some risk analysis that can be done to determine the chance of it occurring within a period.

Interim Rowan County Emergency Services Chief Allen Cress said there were calls into the 911 communications center from people reporting it. No reports have come in of any damage, Cress said.

Cress said he didn’t feel the quake near his home, just outside of Faith, but he heard from family members who did. And there’s a scientific reason for that.

Blakeman explained earthquakes as causing effects similar to ripples in a pond.

“The further you are, the less likely you are to feel it” he said.

The material from which a person’s home is built — brick, wood or other material — as well as the type soil can affect whether the quake is felt further away. Blakeman said some people are also sensitive to those vibrations.

“Also if you’re driving, you are less likely to feel it because you’re insulated,” Blakeman said.

Blakeman urged residents not to worry and to take precautions like securing bookcases to the wall and know where to go and what to do if another should occur.