SALISBURY — Tyrone “T.Y.” Cole never scored a bucket for the North Rowan boys basketball team, but he knows he won some games for them in the early 2000s.

A lot of fans and players agree with that assessment. 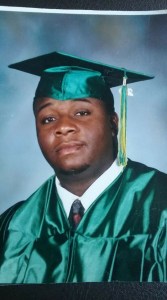 T.Y. made a difference with colorful antics that frantically fired up North’s fan base in gyms that were standing room only. That fan base, in turn, whipped up the intensity level of talented roundball squads. The chants, the claps, the stomps, the woop-woops, the roof-raising gestures, the sheer noise — the trigger man for it all, the catalyst, was always T.Y.

“When you walked into our gym, you had to be mentally ready, had to be prepared for the things we were going to do to mess with you,” T.Y. said cheerfully. “It was never personal, just guys having some fun, but we shook up some pretty good players. We made a difference. We motivated the team. We helped North win close games.”

Kelly Everhart, who head-coached North in the T.Y.  days, gave T.Y. and his cohorts the ultimate salute at a showdown home game with Lexington.

“Eight pizzas were delivered to me at the front row of the gym that night,” T.Y. said. “That showed his appreciation. Yes, that was a classic moment.”

Basketball, a game played with wild momentum swings in a confined space, with Rowan crowds in old gyms close enough to reach out and touch the players, was the sport perfectly suited to embrace the stylings of a cheer-master.

“I loved football, too, but the cheers didn’t work as well in a football stadium,” T.Y. said. “People were more spread out. And the game stops a lot. Basketball is non-stop.”

Track and field was T.Y.’s second-best sport when it came to leading the crowd. North athletes had long employed rhythmic claps to support the efforts of their amazing array of jumpers, and T.Y. eagerly offered his enthusiasm to championship teams.

“Coach (Robert) Steele kept asking me when was I coming out to support track,” T.Y. said. “And so I did. Good times.”

Even today, around town and at work at Schneider Electric, T.Y. is still something of a legend, still recognized for the rambunctious, rollicking deeds of his youth.

Born in Akron, Ohio, but raised in Salisbury, T.Y. loved sports from his earliest memories.

In the years of segregation, his  mother had played basketball at R.A. Clement, the Black school for students in western Rowan. After the girls played,  she’d go in the stands and lead the cheers for the boys team. T.Y. definitely inherited those genes.

His favorite sport was hoops and he played in elementary school, but he also could consume a box of ice cream sandwiches at a single sitting. That prodigious appetite shortened his days as an active participant on the court.

In elementary school, they called him Ty — short for Tyrone — but one friend was determined to be different. A youngster named Michael Jackson decided he was going to call him T.Y.

“When I was going to North Rowan, all the students called me T.Y.,” he said. “I was T.Y. even to my teachers.”

He remembers the night that his role as crowd-leader began. It was West Rowan at North Rowan early in the 1999-2000 season. The teams were playing each other back-to-back. West had won the first one, 67-61. But North held a big lead in the rematch in Spencer, and T.Y. was going crazy on the front row of the student section, just doing what came naturally.

That’s when he heard the North crowd chanting his name.

“We were up on West and we playing like crazy and that’s the night that T.Y. chant started,” he said. “Unfortunately, Scooter Sherrill (who scored 32) wouldn’t let West lose. They beat us by one point.”

North moved on to a breakthrough win, however, against that powerful West team in the Christmas tournament semifinals at Catawba.

Both teams were exceptional that season. West would go 16-0 in the South Piedmont Conference, while North went 12-0 in the Central Carolina Conference.

North, with a team built around a junior core of Bryan McCullough, Dre Byrd, Marcus Reddick, Marcus Lawing , Graham Hosch and Chris Phillips, embarked on a 12-game winning streak coming out of the Christmas tournament. Most of those players were close friends of T.Y.

“I felt like I was getting our gym crunk (cranked up, excited) in the same way that Lil John could get a place crunk with his music,” T.Y. said. “Some of our guys, Graham Hosch, especially, you could just see his intensity start to soar as soon as the crowd got into it. There was a night in 2000 that Mario Sturdivant had back-to-back dunks against Salisbury and I thought the roof might come off.”

While North’s rivalry with Salisbury brought serious intensity, North vs. West for a few years was other-worldly.

“Salisbury games were big for us just because of the simple fact that it was Salisbury,” T.Y. explained. “But the West rivalry was at an all-time high then because West was loaded and was always the team to beat. West had Scooter Sherrill. And they had Donte Minter and Terris Sifford. They had the twins, Phillip and Jason Williams. They had Junior Hairston. We gave Junior a hard time when he played for Lexington against us and a harder time when he started playing for West Rowan against us. Adding to all of it, I had a whole lot of West Rowan family members. A loss to West would bring tears. Even my own mother would throw in a jab at me now and then. She’d say, ‘Hey, I heard Scooter really went off tonight.’ ”

In 2000-01, Scooter was a freshman at N.C. State, and the balance of power in the county had shifted to Spencer. North beat West three times in the month of December in 2000.

“When West came to North, they didn’t have Scooter, but they still had Donte, Junior and the Williams boys,” T.Y. said. “The crowd was so big for that game that a lot of people couldn’t even get in.We got loud. People told me later that they could hear us, even standing in the parking lot they could hear us, so they knew what was going on in the gym.”

“I even got to give a few halftime speeches,” T.Y. said. “If the guys were a little lethargic, the coaches thought I could get their juices flowing a little bit. The guys respected what I had to say, and they’d go out and play harder. That season we were winning every game, and it was much just mayhem on the sideline every home game, and we didn’t mind taking our show on the road, either. We implemented college-style cheers and brought them to life in the North Rowan gym. I’d go out to  a middle school game and the North cheerleaders were emulating the same cheers they saw us using in the high school gym. They’d got on the right beat, and it was fun to see that.”

The state title proved elusive. North had lost Byrd, the master ball-handler and penetrator, for the second semester, and the Cavaliers fell to Lexington in overtime in the West Regional final to finish 27-1. It was a bitter loss to a team that North already had beaten three times.

It was never quite the same in the North stands after McCullough and his classmates graduated. T.Y. was out of school also, but he still made it back to the sideline for the really big games.

“I remember a night when Channing Powell and his Salisbury team came in there and we let them have it pretty good,” T.Y. said. “I remember a night that Mack (McMillon) reached out of the crowd and grabbed the ball out of a Lexington player’s hands, and the official got confused and gave us the ball. That was the wildest thing I ever saw in a game like that.”

There was a night in 2001-02 — one of West Rowan’s undefeated years — when T.Y. was scouting the Falcons against Garinger. He didn’t discover any West weaknesses, but he did find a cheer he could use.

That 2001-02 season ended for the Cavaliers with a 96-65 loss in Burlington to a very strong Cummings squad. Drew Williamson, who was a great high school quarterback and a Division I basketball recruit, led Williamson and North Rowan got wiped out in the second half.

T.Y. made that road trip.

“We actually were in that game for a while,” T.Y. said. “We were shaking them up some with our chants and all, but Cummings was just too good.”

There would be a few T.Y. sightings as North’s glory days temporarily faded, but then the BGN empire was rekindled by coach Andrew Mitchell, who led North to a 1A state title in 2010-11.

“I was there at the regional when we beat Winston-Salem Prep in two overtimes,”  T.Y. said. “The good old days kind of reappeared for a little bit.”

“Dee says she wouldn’t have liked me at all in high school, so I guess it’s a good thing she didn’t know me back then,” T.Y. said. “We still talk a little junk back and forth about North and Salisbury. We place a friendly little bet whenever North Rowan and Salisbury play in football or basketball.”

T.Y. created tons of special memories for fans in a special era for Rowan athletics.

How famous was T.Y. during his peak seasons?

Well, in 2001-02, a rebuilding North squad had graduated its great senior class and headed over to West to take its punishment from a towering team that would go 30-0.

West owed North for those three stinging defeats the previous season and there was little mercy. West won in a rout.