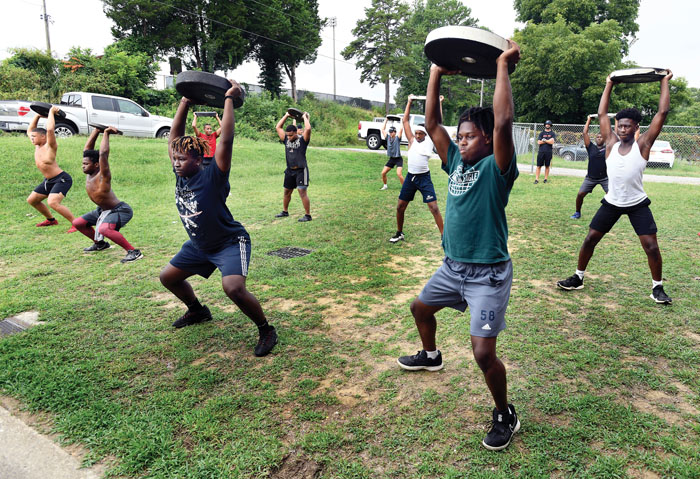 Wayne Hinshaw / for the Salisbury Post The Salisbury High football team was divided into three groups to keep the numbers low with each group moving from station to station. Here, they are doing exercises and using 45-pound weights outside.

SALISBURY — Twelve states, plus the District of Columbia, have made decisions to postpone football until the spring of 2021.

As of Wednesday, 37 states still had a plan to play this fall, although with a wide range of opening nights. Utah is still scheduled to kick things off on Aug. 13, while New Jersey and Louisiana are on the other end of the spectrum. They’re shooting for early October.

Texas is Texas. It has different classifications planning to start on different dates.

The one state that as of Wednesday remained in limbo, in the “To Be Determined” category regarding a start for high school football, is North Carolina.

The North Carolina High School Athletic Association informed members Thursday that the season will be postponed beyond Sept. 1, which had been the target date, but did not provide a new date. The NCHSAA hopes to provide a new guideline before the start of school on Aug. 17.

“We want to play sports during this upcoming school year and are making plans to do so,” the NCHSAA’s statement said. “However, the health and safety of all participants, including coaches and other essential staff, will be a priority as decisions and plans are made.”

Obviously, things aren’t going to start anywhere close to “on time.” Some coaches and administrators hope to play this spring. Some see that as the best-case scenario.

Does high school football have to be played at some point this school year?

The short answer to that is yes. High school athletic budgets can’t survive without football. Basketball and baseball can carry their own weight most places. At some local schools, volleyball, softball and wrestling support themselves. But there are a lot of sports that are essentially subsidized by those five or six home football games each season, plus playoff games which generally draw enormous crowds.

Not playing football wouldn’t just be hard to deal with financially, it would be negatively life-changing for senior athletes who need a 2020-21 season to land a scholarship. There are some blue-chip recruits who are already committed to colleges or have their choice of schools, but there are 10 times that many potential recruits for whom a football season is a necessity to get noticed by a D-II or D-III program. Not having a senior season, at all, would be life-altering, and not in a good way.

After a powerful 2019 playoff run that included a series of road victories, the Salisbury Hornets played in the 2AA state championship game last season and loom again as a potential state contender with four preseason 2AA All-State players, including linebacker Jalon Walker, a four-star recruit who has dozens of big-time offers on the table.

Like the rest of Rowan County, the Hornets have been preparing since mid-June, although with many rules and restrictions and with lots of disinfectant.

The Hornets, who do a lot of their work with weights, while practicing social distancing outdoors, also make use of track hurdles for agility drills.

They were able to incorporate a football into practice for the first time on Monday, Aug. 3. Prior to that, they were working out without a ball.

“That was a nice day to be able to use a ball, as that’s also the day we got our quarterback out here,” Hinson said.

Vance Honeycutt, a tall shortstop committed to UNC baseball, is the returning starter at quarterback. He’s been playing baseball all summer with the South Charlotte Panthers team for rising seniors.

The bottom line is the Hornets still expect to play football at some point. Now they put in the work as they wait for word on exactly when that first kickoff will be.

“We get some good stuff done every day,” Hinson said. “The kids worked hard again today.”