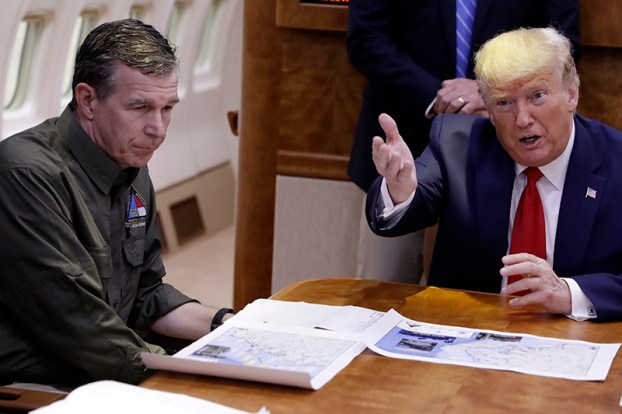 “I like the fact that he did provide some help for hurricane recovery in North Carolina. I do like the push for a vaccine. But most of the federal strategy that we’ve had during this pandemic has been nonexistent,” Cooper said during a wide-ranging interview with The Associated Press.

Cooper has largely refrained thus far from direct attacks on Trump as he manages the politically divided state’s pandemic response heading into the November election. Cooper faces the state’s Republican lieutenant governor, who has been endorsed by the president.

“I don’t mind talking about President Trump,” Cooper said. “I oppose him when I disagree with him. I will support his actions when they help North Carolina. I always put North Carolina first.”
The governor reiterated his support for former Vice President Joe Biden, though he wouldn’t say whether he voted for Biden in the state’s March 3 primary. “That’s my business. I support him, but the ballot is private,” he said.

Cooper, who has consistently led gubernatorial opponent Lt. Gov. Dan Forest in public opinion polls, chastised the Republican for flouting public health guidance at campaign events.
“My opponent, Dan Forest, is going around holding in-person receptions without a mask, without social distancing and he’s talking about saying that he’s shaking as many hands as he possibly can,” Cooper said. “That’s the kind of thing we need to stop.”

A tweet posted last weekend by state GOP Chairman Michael Whatley showed Forest at a Mount Airy restaurant without a mask standing close to maskless voters and volunteers. Forest’s campaign posted a photo on Facebook on July 14 showing the lieutenant governor speaking to dozens of maskless supporters in Iredell County.

Forest declined an AP interview request, and his campaign dismissed concerns about safety at his events and concerns about erroneous claims the lieutenant governor made last month to the Hendersonville Times-News that scientific studies have shown that “masks do not work with viruses.”

The Forest campaign instead criticized Cooper for walking through a protest outside the governor’s mansion in June with a mask looped around one ear but not covering his face.

“Not a single one of our events has been as large as the protest in downtown Raleigh that Gov. Cooper marched in with his mask dangling from his ear,” said an email from Andrew Dunn, a spokesman for Forest.

Cooper said he and his campaign have no plans to resume the in-person events it halted in March. Asked how and whether he’d enforce his statewide mask mandate against Forest, Cooper said he didn’t want to violate people’s First Amendment free speech rights. Instead, he is banking on public pressure to halt Forest.

“No. 1, we’re calling him out,” Cooper said of Forest’s campaign practices. “We hope that he will see the light and stop this, and I think he’s having significantly fewer people that are attending his events because they are concerned about their own health and safety.”

Republicans have criticized Cooper’s slow reopening moves during the pandemic, while some Democrats wish he’d do more to enforce his executive orders that limit mass gatherings and prevent certain businesses from reopening. Cooper on Wednesday announced a five-week extension to the state’s Phase 2 reopening plan, which requires bars, gyms, movie theaters and amusement parks to remain closed and requires face coverings in public places.

The North Carolina Department of Health and Human Services said last month that it has only issued a single abatement order, which was for a racetrack that refused to close.

But Cooper insisted the state is cracking down on companies that violate his executive order by largely working behind the scenes with state alcohol regulators and law enforcement.
“Enforcement is going as well as it can,” Cooper said. “We’re constantly looking at more ways to require better enforcement of the orders.”

He noted that he wished he had more authority to take action by levying fines.

“The statute is limited as to what the governor can do in enforcement of orders, and that it’s limited to misdemeanor criminal violations, which when we go back and analyze this pandemic and what we need to do differently, I think getting some authority to put in lesser types of enforcement actions like fines for a governor, I think could make it better,” Cooper said. “When we get to the end of this, we can look at ways to make some changes.”
___
Anderson is a corps member for the Associated Press/Report for America Statehouse News Initiative. Report for America is a nonprofit national service program that places journalists in local newsrooms to report on undercovered issues.

By Natalie Anderson natalie.anderson@salisburypost.com SALISBURY — The Salisbury City Council on Tuesday rescinded its own moratorium on utility disconnections as... read more