‘This is our lifeline:’ East Spencer officials ask Salisbury for water billing credit to aid in economic development 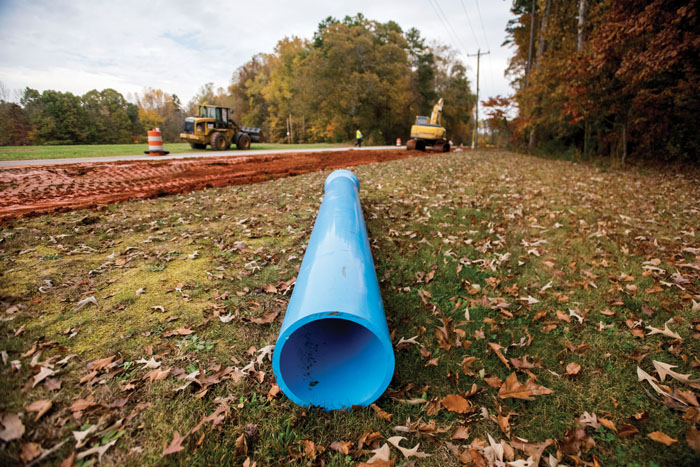 SALISBURY — Salisbury-Rowan Utilities as well as city staff will work with the town of East Spencer to determine a multi-month water billing credit for the town as it continues economic development endeavors.

East Spencer Mayor Barbara Mallett said during Tuesday’s Salisbury City Council meeting that in 2000 the town entered into a water/sewer agreement with the city of Salisbury to clear debt accrued due to financial and operational problems. Salisbury also took over East Spencer’s maintenance, collections and reading of meters. But the town was responsible for paying the city an additional $10,000 each month for management and billing, which Mallett said was paid in full in 2015.

Salisbury-Rowan Utilities Director Jim Behmer said about 3,500 gallons of water is still being lost per day in the town due to water leaks that haven’t yet been identified despite assistance from SRU and other engineers. The water loss could be from a combination of some old meter, non-metered connections as well as a lot of little leaks that add up.

“The town’s finances are very fragile,” Sammons said. “We work on very thin margins. Our tax base is quite small.”

Behmer said there are around 500 accounts in East Spencer, with 150 vacant accounts.

The town has tried to remedy the issues, though, and in July 2018 entered into a 100% grant-funded project to further repair water issues. But Behmer told council members the improvements weren’t up to the city’s standards, which are higher than the state’s standards.

He added the company that completed the work has since gone out of business and has a reputation of not executing engineering plans well. While the intent was to reduce leaks from nonrevenue water sources, the opposite happened; the leaks increased. Engineers didn’t have a good answer for why their project didn’t meet the purpose that it was intended to meet, he said. Additionally, “very little money” was put into inspections.

Mallett said the town couldn’t use the grant money at the time to build their infrastructure to the city’s standards, and instead had to do the best it could.

Part of the town’s decrease in net profit is due to an expiration of sewer credits from the city in July 2018, which amounted to $60,000 per year. Salisbury Finance Manager Wade Furches said sewer credits had been given to the town due to leaks, but the city stopped granting them after the 2018 project was intended to reduce leakage. What’s typical for SRU is granting customers full credits for sewer loss but only half credits for water loss since the water still goes through the meters.

Behmer said the SRU has looked into debt forgiveness for the botched project but hasn’t found anything yet.

Nonetheless, the town still has the debt. Bennett said the town is asking for some consideration in its favor because it’s improving.

The original request from the town was for an eight-month credit from Salisbury-Rowan Utilities. However, Salisbury Manager Lane Bailey said the city’s ordinance only allows for reimbursement up to six months.

Much of the discussion Tuesday focused on a five-month credit, which Furches said would amount to $123,750. Behmer said he can justify a three-month credit, but that five months is understandable due to the town’s financial situation.

Mallett said future economic development along the Exit 79 interchange is the town’s “lifeline” to improve character and quality of life. She added that the town’s partnership with Salisbury is crucial for growth in northern Rowan County.

While shunned in previous construction, Behmer told East Spencer officials that implementing smart meters is strongly suggested because they’re more accurate at readings and can better pinpoint spikes in usage or water leaks. If she serves as mayor for another term, Mallett said that’s her goal.

Council member Tamara Sheffield asked if county government would be willing to help the town upgrade to smart meters as more development is in the works for that area.

The county and city could also inherit the debt accrued from the 2011 project, Alexander said.

But Mallett said the city and county taking over could prevent the town from having autonomy over future development projects as the town’s goal is to expand its boundaries, adding that the water would expand with the developments. Mallett said she would rather have conversations about what the town would receive in exchange for having the city or county take over its water system.

“Northern Rowan County is a hotspot and we all know it,” she said. “So we want to make sure East Spencer gets its piece.”

Council members ultimately agreed to allow Bailey and the city staff to determine the best credit to be granted to the town. Sheffield said the biggest concern to be addressed is identifying the gap with the water loss to prevent similar discussions in the future.

“It’s not appropriate for it to become a political issue,” Alexander said, adding that the council shouldn’t legislate this issue. “I think it has to be dealt with our city manager and city staff. And it has to be equitable for every other community that we serve because I think there’s a slippery slope if we start doing this for that. Then we have a mess.”

But Mayor Pro Tem Al Heggins said not every other community has the same financial situation as East Spencer. She asked city staff to consider granting East Spencer an extra month of credit when finalizing an agreement since the city ordinance allows for six months. She added the town is one that struggles financially and doesn’t have the same resources the other communities do.

“So anything we can do to help our neighbor to help them to better their town is something that I think we should certainly consider,” Heggins said, adding that it could help the town increase its resources and begin getting its systems up to the city’s standards.