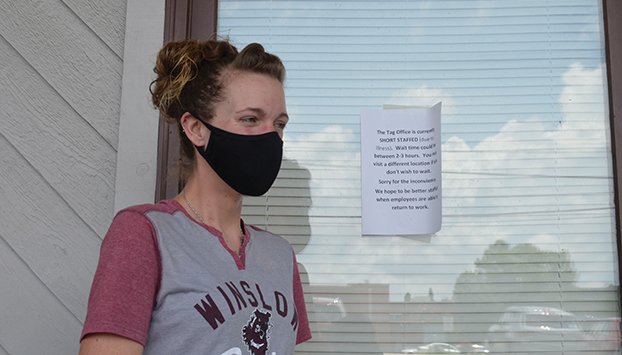 Whitney Singleton, waits in line at the N.C. License Plate Agency to renew their license plates in what they planned for to be a long wait. The sign posted on the window notifies customers of a two or more hour long wait. Shavonne Potts/Salisbury Post

SALISBURY — There are multiple reasons behind the lines at the Salisbury location of the N.C. License Plate Agency, said local contractor Tina Corriher.

Each license plate office is managed by a contractor. Corriher has headed the office at 130 East Kerr St. for nearly 21 years. She said one employee has a medical condition, one employee is on maternity leave and she’s currently in the midst of training two new employees.

“It takes at least 90 days to train,” Corriher said.

And besides being a few employees short, she said, “we are always slammed at the end of the month” — another factor contributed to lines that were dozens of people long outside of the office last week.

“We are doing the best we can,” Corriher said.

A note placed outside the office said delays were because of illness, but Corriher clarified the note actually is in regards to the employee on medical leave. Corriher said she’s aware the mention of anyone who may be ill or sick could raise eyebrows, but she wants to assure the public no one in the office has COVID-19. Corriher said, in fact, the office is deep cleaned three times a week and the office limits customers inside to seven to eight people or less, she said.

Early on during the pandemic, customers would not social distance. So staff have needed to limit the number of people who can enter at a given time. And despite lines appearing long outside, Corriher said during the pandemic the office has seen fewer people than usual.

Importantly, the office has remained open throughout the pandemic as other offices nearby have closed. Greensboro and Lexington are among the offices that have either closed or accepted customers by appointment only. For those people, the Salisbury office is the nearest location that’s still open with no appointment needed.

Corriher said some services can be done online, but others, including adding or subtracting the newest title information online, doesn’t work because of an issue with the changing title numbers. She’s had customers say they attempted to make changes online without success.

Corriher said she doesn’t have the heart to turn a customer away if they are in line at 5 p.m. She also will give customers who are wheelchair-bound or elderly first priority in getting into the building and will assist those who have to get out of line to get a vehicle inspection — something people often do not remember to do before they come to the license plate office. Corriher says she allows them to return and move to the front of the line, especially if they’ve already spent hours waiting.

Corriher said she’s confident the office will get back to full staff and encourages people to take advantage of the extension.