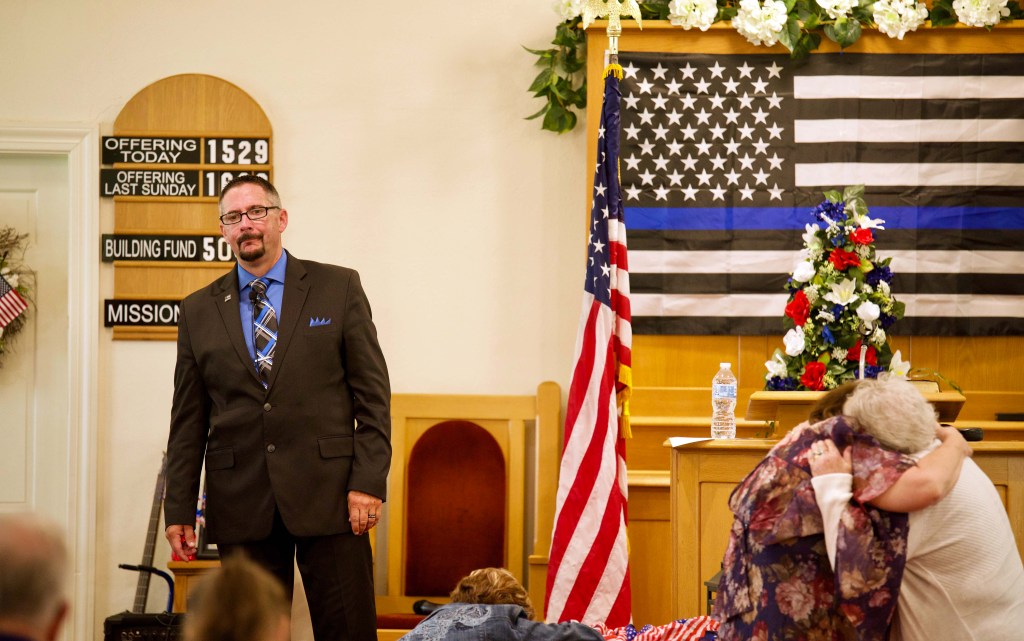 Carl Blankenship/Salisbury Post - Tim Jones standing at the front of the sanctuary as he was wrapping up the service. He recognized law enforcement in the congregation during the service and preached in front of a "thin blue line" flag placed behind the pulpit.

The church has courted controversy in the past for the openly conservative stances posted on its sign by the road reading “WE ARE VOTING, AND NOT FOR HILLARY,” another advocating prayer for Supreme Court Justice Brett Kavanaugh during his confirmation hearings and while there were accusations brought against him of sexual assault, “Trying 2 impeach Jesus too!” while President Donald Trump was undergoing impeachment hearings and, recently, “All Lives Matter.”

Pastor Tim Jones said he is unapologetic about the church’s political stances. At the beginning of his message, Jones said he’d readily say who he voted for in 2016 if asked. Someone obliged and he replied, “Donald Trump.”

Before he began the message, Jones told the congregation there were masks and hand sanitizer for attendees and laid out the rules for a lunch that would be catered in the fellowship hall. He said no one beside kitchen staff would be allowed in the kitchen area, and the staff wore masks.

The sermon ran long, and Jones, standing in front of a “thin blue line” flag, touched on a number of topics. He described law enforcement as the people who will come to help when someone picks up the phone and calls 911. He said officers who commit illegal acts in the line of duty should be held accountable but “one bad apple” should not spoil the bunch.

“I want everybody to know and it be on the record: the tragedy that happened with innocent people that lost their lives due to careless and reckless law enforcement, I absolutely stand against that,” Jones said, adding those officers need to answer for what they have done.

Jones said all lives matter at the church and in the community. Jones said he does not want to have to distinguish between colors and races when referring to individuals.

Jones, a former police officer himself, spoke to his own experience and the psychological toll of feeling a lack of support can place on law enforcement.

“I can’t imagine going to work today knowing that every traffic stop, if I were to stop somebody for a tail light or if I was to stop somebody for speeding, that there is a risk that I’m going to lose my life not because of anything else other than people are now being trained to hate law and order,” Jones said. “That’s a shame.”

Jones was critical of some recent protests, too.

“Imagine the power in the prayer that we put behind people if we all would come together with a collectively unified heart and pray for this nation,” Jones said. “Do you know what we could do? But the problem is, is that we’re allowing this 2% of the people to run out here, that the devils’ got ahold of. Listen, they don’t care about you and your family.”

Jones said the country needs people who are unafraid to say they are Christian and support conservative social stances like opposition to abortion. In the end, Jones said, the church’s work is done out of love.

“We do what we do out of love because of the savior,” Jones said.

The service and lunch was assisted by a group called Watchmen, which oversaw the parking lot entrance. John Autry, a former Army sergeant and Watchmen member, said the group is not a militia. Jones said the group was there to invite anyone who arrived with a sign or to protest if they would like to come to church or ask them to leave the property.

“We’re not here to fight, or incite violence,” Autry said. “We’re not like that. We’re just here for support.”

Autry said he is involved with the group because he is a patriot and tired of negativity, destruction of property and removal of monuments.

Lana Sterling, who has worked in law enforcement for 26 years, attended the service and lunch. Sterling said she spent six years with Salisbury Police Department and the last 20 years with Rowan County Sheriff’s Office. She plans to retire on Thursday and knows Jones from when he was a China Grove police officer.

“You know, I have been invited to many churches to do things for law enforcement and I have never went,” Sterling said. “That’s shameful to say I guess. I thought, this being my last year, I needed to come to support Tim for what he does.

“Of course we’re both believers in Jesus Christ. Jesus Christ radically changed my life in 2007. Me and Tim have a lot of things alike as far as our salvation experience.”

Sterling said the events of the previous few months have made her sad, and that she has seen some “bad apples” work their way into the law enforcement field during the past 15 years.

“It’s heartbreaking,” Sterling said, adding she wanted to work in law enforcement because she loves people and wants to help them.

Jones said he wanted law enforcement to know there are still people who love and support them, and the church stands against a nationwide movement to defund law enforcement agencies. Jones said the church is not apologetic for its message and that as a conservative, Baptist church, the congregation bases how they live and what they for on the Bible.

“That’s just who we are,” Jones said.

Ask Us: Was grant money to repair Landis dam…