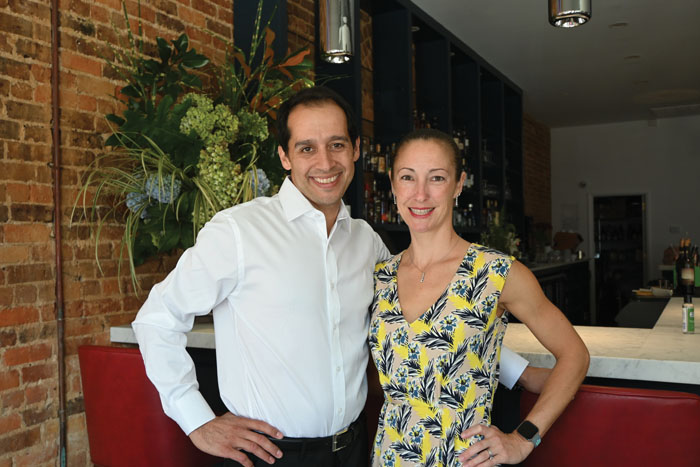 SALISBURY — One local couple is using a recipe of “good food, good company and good wine” to bring a finer dining option to downtown Salisbury.

Carrie and Paul Bardinas, owners of Carpe Vinum 121, have lived in Salisbury since they were children, and they have four boys of their own. Paul is originally from New Jersey and is the son of Cuban immigrants. Carrie is from Oklahoma. Both also have experience working in fine dining. About 20 years ago, Paul was working in New York and said he wanted to one day open a restaurant of his own.

The couple said they both felt downtown Salisbury would be ideal for a more casual version of a fine dining restaurant. Carpe Vinum 121, located at 121 South Main Street, is the missing piece, they say.

“We had the feeling that, with the travels we’ve done, with the places we’ve gone to eat, Salisbury was just missing that slightly elevated, gastronomic scene that you find in places like Charlotte where you see a lot of experimental stuff going on,” Paul said. “We just thought this is what downtown Salisbury needs.”

The menu is centered around wine and how well each pairs with dishes the couple personally enjoys. The menu is heavily inspired with Mediterranean- and French-style dishes, and the interior has a “French bistro” feel, Paul said. Some items on the full menu include steak tartare, oysters, ceviche, lamb, seared sea bass, charcuterie boards with cheeses from Europe and dry-aged steaks from a local meat plant.

“We decided to put on a menu with all of the things that we love that you have to drive an hour to get,” Carrie said. “You get it all here.”

Some of their inspiration for the restaurant is derived from the food scene in Charleston, South Carolina, which is the couple’s favorite getaway place, Carrie said.

The couple aims to support local businesses with some of the fresh food and drinks Carpe Vinum 121 offers. They’re adding beers from New Sarum to the menu, and the fresh produce comes from the Salisbury Farmers Market. Some tomatoes and vegetables come from Carrie’s own garden.

The couple say they appreciate fine dining, but take a slightly casual approach to their restaurant so people will feel comfortable. For example, Carrie said they “did away with table cloths.”

The executive chef is Lindsay Coarsey, whose brother, John, is a friend of Paul’s and has been coming into the restaurant every night and volunteering his time to help train the staff and help with the business operation.

“We have great friends who have been in here every night since we’ve been open,” Carrie said. “Just the love and support that we have gotten from people downtown, and from the community, has been great.”

The original grand opening was to be in January, but delays and then COVID-19 put a damper on the couple’s plans. Now they’re ready, and since July 23, the restaurant has undergone some “soft openings” before officially opening on Aug. 11.

With current phase two restrictions still in place, the restaurant can hold about 24 diners inside and about a dozen outside.

Carrie and Paul recommend visiting carpevinum121.com to book a reservation.