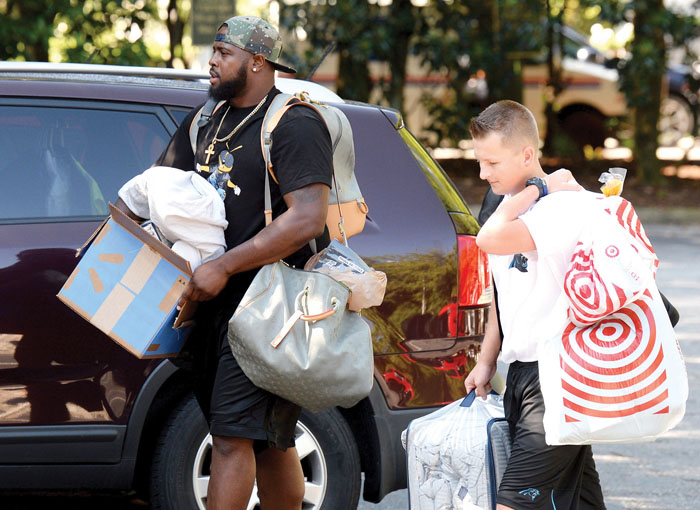 Short sat out the final 14 games of 2019 with a partially torn rotator cuff.

Although he said there were days during the seven-month recovery process that left him wondering if his shoulder was healing correctly, he now calls the surgery an “awesome success” and feels as strong as ever.

Now he can’t wait to get back to practice.

“I’m still working on little things as far as just getting a range of motion,” Short said. “But other than that, I feel good.”

Short will anchor Carolina’s completely revamped defensive line, starting alongside rookie defensive tackle Derrick Brown, the No. 7 pick in this year’s NFL draft out of Auburn.

“KK looks like he’s in fantastic shape,” Panthers coach Matt Rhule said. “He’s 315 pounds. I think he’s done a really good job of putting himself in position to have a special year.”

Short has been a playmaker for the Panthers with 32 1/2 sacks and nine forced fumbles in his first six seasons with Carolina despite seeing plenty of double teams. His quickness allows the Panthers to shift him out to defensive end, where he can be more effective as a rusher on certain passing downs.

The Panthers can certainly use him after losing nine starters from the squad that finished last season.

“We have to be better than last year,” Short said of the defense. “We have to be disciplined and come in with the right mindset. Have to hold each other accountable. … If the defensive line is not doing our job, tell us so we can get it corrected. You have to take criticism and take it and make it motivation.”

Short plans to take on more of a leadership role.

He’s also expected to serve as a mentor to Brown, who Rhule believes can be a dominant player for years to come.
Together, they have the potential to be a formidable duo inside and fix a porous run defense.

“Seeing what he has done since the day he got drafted until today, he has put himself in (great) position,” Short said of Brown. “He is willing to work and help out everybody. As far as double teams, who knows? They might double team him and leave me one on one. We have to be prepared to win every play.”

Short spoke with his family before making a decision on whether to play this season when some others have opted out because of the coronavirus pandemic.

But after weighing the options he felt it was safe enough to return.

Short felt even more reassured when he walked into the team’s stadium for the first time last week.

There, he said, players had their temperatures checked in the parking lot. They wore monitors to alarm them if they got too close to a teammate.

The atmosphere is different, too. He said it takes more time to do everything, like using the hot tub, which now restricts the number of players allowed in at one time. Players also spend their breaks in the team’s luxury suites, each assigned their own one, instead of hanging out in the players’ lounge or locker room.

“The stuff we normally do, you have to realize now that it’s a whole different direction that we are going and they’re trying to keep everyone safe in this building,” Short said. “The precaution that they have around here is crazy, it’s overwhelming. But it’s the right thing for this organization to do to help keep us safe.”