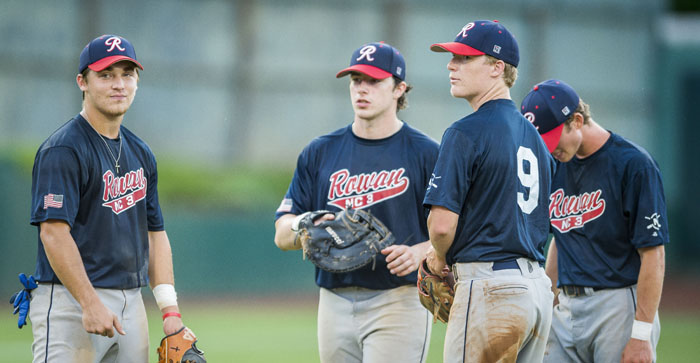 Rowan's NC 3 baseball team, which completed the season with a victory Friday night over Concord, gather in an earlier game. Photo Credit: Sean Meyers, For the Salisbury Post

Behind the scenes, sports-lover Jason “Hot Dog Shack” Smith quietly volunteered to pay the umpires for every home game at Newman Park.

They passed the donation bucket Friday around Newman Park during the season finale. The giving totaled $1,300.

There was an overwhelming feeling of appreciation in Rowan County, as well as in surrounding towns and counties, for something that is expected to be a one-and-done phenomenon — NC3 baseball.

The monumental task of creating, organizing and operating a fledgling baseball league out of nowhere, once American Legion dropped out of the picture in April due to COVID-19 concerns, took place safely, smoothly and successfully.

“The kids won this summer because many people stepped up to say we have to find a way to say yes to baseball,” the Kannapolis Towelers NC team tweeted. “During these difficult days we all need to keep fighting for kids. Kids need to be outside. Kids need to be with friends. Kids need competition. Kids need sports.”

It’s easy to talk about caring about the plight of young athletes in 2020, but there were people from Union County, in the south, to Mount Airy, in the north, who rolled up their sleeves and went out and did something tangible with NC3 baseball.

It seemed like the longest of long shots when it all started with drive-through sign-ups and piecing schedules together.

It concluded with one last Rowan victory on Friday night, with Cole Hales striking out the final batter Rowan will face this season.

“This really was a good experience,” Rowan head coach Jim Gantt said. “The players appreciated the opportunity to play this summer and they were willing to be coached. That’s the message we left them with at our last practice.  We (Gantt, Seth Graham, Adam Patterson and Lee Poteat) told the players we appreciated getting to coach them. I know personally this league was as big for my mental health as it was for any of our players.”

Rowan County played 31 games in the six weeks from mid-June to the end of July.

That they won 23 times and finished second to High Point in an 11-team league was nice, but the wins weren’t the biggest thing in the big picture.

The Rowan players and their opponents move on now to whatever comes next — whether it’s college or high school — with some sense of accomplishment. Their summer wasn’t dismal, after all, and after the way spring sports abruptly ended, they needed the lift.

So did their parents.

“Thank you, coaches, umpires, players and volunteers that gave us a glimmer of hope in a time of need and providing an opportunity for these kids to get out and do their thing,” tweeted Larry Gouge, the father of Rowan NC3 southpaw Casey Gouge.

“Thank to all that were involved in making this happen,” tweeted Jeff Street, father of Ryan Street, a Rowan pitcher/infielder. “It was so great to watch all these games and enjoy live baseball. It has helped so many folks during these tough times and provided an outlet of enjoyment.”

Rowan’s offense was fueled by the two young men at the top of the lineup — Charlie Klingler and Hales. They put together extraordinary seasons. Klingler batted .379 with 37 runs scored and 29 RBIs. Hales checked in with a .437 batting average, 31 runs scored and 32 RBIS. Klingler went 0-fer only twice in the games that he started.

“Those two go about it in totally different ways — Hales brings a lot of intensity, while Klingler is going to have fun whatever he does — but they showed that there’s more than one way to get it done,” Gantt said. “They’re both really good players.”

Behind them in the lineup came Wayne Mize, Jordan Goodine and Logan Rogers. The table was usually set and they provided a lot of RBIs.

On the mound, Rowan counted heavily on players who haven’t pitched a lot of varsity baseball in their high school careers. Dylan Driver (5-1), Casey Gouge (4-2), Rogers (3-0) and Street (2-1) got the job done a lot more often than not.

There was a wide range of talent in the NC3 league — from a Randolph County team with American Legion World Series veterans to a Mount Airy team with mostly rising juniors. High Point and Union County put a number of Division I athletes on the field.

“High Point was very talented and some of the arms that Union County had were unbelievable,” Gantt said. “But every team in the league stayed with it, and I thought we competed well. We made some mistakes, coaches as well as players did, but we learned from them. We  let our players do a lot on their own and to think on their own. If you want to swing on 3-and-0, go ahead and swing as long as you get your pitch. If you want to try for the extra base, go for it, if you believe you can make it. But if you don’t make it, be prepared to hear about what you did wrong.”

Gantt said in  NC3 baseball was a bit more carefee than summer baseball at Newman Park normally is. The uncharted summer provided some of the finest blooper reel moments Gantt has witnessed in his career. He said just thinking about Klingler springing into action from behind the plate, tripping and heading the baseball, will provide laughs every time the story is retold for years to come.

“There was a lighter feeling when it came to dealing with the umpires this summer,” Gantt said. “The umpires enjoyed being out here too, and not just because they were earning a little money, They were smiling more than usual. It was nice talking to them more and yelling at them less.”

At most games that Rowan County played, attendance was restricted to 25 fans.

“That did feel odd and I can say baseball is a whole lot better with fans,” Gantt said. “We’ve gotten used to having that home-field advantage at Newman Park.”

Fans who couldn’t get into the park, watched from outside outfield fences They watched through chain-link fences. At Newman Park, they watched from Catawba’s football stadium.

They watched gleefully from the bleachers whenever those opportunities arose.

They saw players from Carson, East Rowan, North Rowan and West Rowan, plus three players who had been on college rosters, come together, play together and get better at baseball. They saw them succeed. They saw them smile.