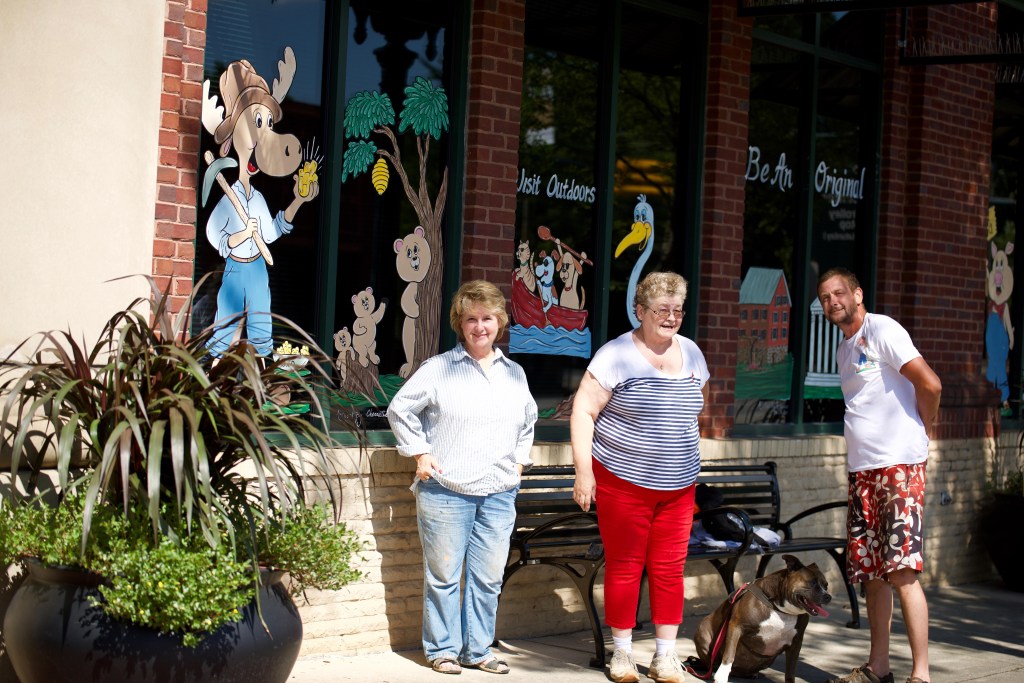 SALISBURY — Local artist Cherrathee Hager is the mind behind a number of the painted windows in Downtown Salisbury.

Hager has been painting windows on storefronts for about two decades. Over the years, she has built up a base of regular clientele who hire her to paint windows for seasonal events and around holidays.

“I guess over the past 20 years people started to recognize my style and the type of work I do,” Hager said.

Her first window paintings were at Checkered Flag Barbecue for the restaurant’s debut. She painted windows for Lora Belle Baby. The Rowan County United Way, which is housed on the second floor of the Post’s building, later contacted her about painting some characters on the Post’s windows. More recently, she was contacted by the Rowan County Tourism Development Authority to paint 21 windows at the Gateway Building.

“They wanted the windows to have some type of lighthearted representation of tourism,” Hager said.

The windows are peppered with tourism themes such as shopping and eating local, with anthropomorphized animals serving as characters along the stretch of windows. And her window paintings generally reflect the people and places in Salisbury. Sometimes, dogs she meets find their way onto windows. Other times, people see themselves in her work.

“They really identify with different things in the paintings,” Hager said, adding passersby have told her the paintings remind them of places they would go and things they would do when they were children.

While she is painting, people walk past and comment they thought the images were decals. She also paints fine art and takes brush to canvas.

Cris Breton is among the people who have found themselves in Hager’s art. He saw himself in the newly-painted prospecting moose on the Gateway Building. He’s a prospector who has traveled the country searching for gold with his service dog Jojo. And Breton says he was “bit by the gold bug” when he turned over a rock and found a quarter-sized nugget. He prospects in North Carolina as well.

Breton said he mainly looks for gold, but he has also chanced upon platinum and gemstones. Before he began hunting gold, he wanted to start his own auto body shop, but now he spends his days working with a pickaxe and sifting gold-rich earth.

Breton has always enjoyed working with his hands. His mother, Doreen Bourque, said he was curious and would always take things apart when he was growing up. One day, she came home to a completely disassembled microwave. He learned about mechanical devices by reverse engineering them.

Breton has autism spectrum disorder, which inspired Bourque to become a special education teacher. She said when he was young he struggled and was nonverbal, but as an adult he is able to live an independent life and work doing what he enjoys.

After Breton saw the character, he told Hager, his neighbor, he loved it. Bourque even made him some T-shirts with the character.

“Cherrathee called me and said his smile was as big as his truck,” Bourque said.

Hager said her neighbor being a prospector did not occur to her until after Breton pointed it out to her. Hager said most of the characters on the window are original, but a moose on one downtown window was borrowed from a brochure for Gold Hill.

The joy people seem to get from seeing her paint and seeing the fresh images around town motivates her. People honk when they drive through downtown and see her working.