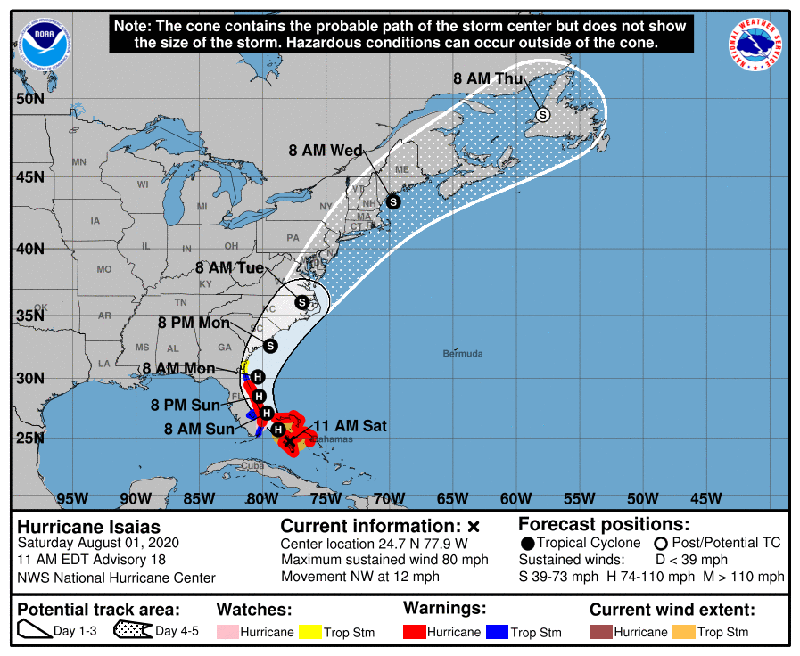 This graphic from the National Weather Service shows the estimated track of Hurricane Isaias and warnings and watches that had been issues as of 11 a.m. Saturday. The cone showing the storm track is intended to show a general area where the storm could go in the next five days. It is not a guarantee of the storm's future location.

RALEIGH — North Carolina Gov. Roy Cooper declared a state of emergency on Friday to help prepare for Hurricane Isaias, which he said will bring atypical challenges given the COVID-19 crisis.

The emergency declaration, running concurrently with the one for the coronavirus in place for months, will help state and local governments respond more nimbly to the storm, Cooper said at a media briefing. The state already has adjusted its traditional shelter options to take social distancing into account.

“With the right protection and sheltering, we can keep people safe from the storm while at the same time trying to avoid making the pandemic worse,” Cooper said at a media briefing. “A hurricane during a pandemic is double trouble, but the state has been carefully preparing for this scenario.”

The National Weather Service forecast indicates the storm will first increase ocean swells and cause rip currents, starting Friday and continuing into next week. Cooper said the state could feel the greatest impact of the storm Monday night and into Tuesday. Tropical storm-force winds could be felt as early as Sunday night.

Coastal residents being asked to evacuate should first try to locate family or friends to stay with inland, Cooper said, or stay at a hotel if they can afford one.

If they can do neither, they’ll be directed to shelter reception centers, where they’ll undergo health screenings. Those with COVID-19 symptoms will be isolated or receive medical treatment, officials said. Others will go to shelters that are smaller and can hold fewer clients to comply with social distancing, Division of Emergency Management Director Mike Sprayberry said.

“Sheltering is going to be different this year,” Sprayberry said. Cooper said recruiting shelter volunteers is more challenging because older adults at higher risk for virus complications are less likely to work.

Swift water rescue teams, if needed for the storm, will have personal protective gear to quell the spread of the virus, Sprayberry said. Some coastal COVID-19 testing sites may need to be rescheduled or canceled due to the storm.

Ocracoke is still recovering from Hurricane Dorian. The storm hit last September, launching a 7-foot (2-meter) storm surge over parts of the island’s village, which measures about a square mile.

Many people remain displaced or are still waiting for houses to be raised higher off the ground. The island’s one school, which serves approximately 170 students, is being rebuilt.

Officials are suggesting Ocracoke residents to take the Ocracoke-Hatteras ferry route to evacuate because routes on Pamlico Sound are operating at significantly reduced capacity due to shoaling in a channel. Other local governments, in consultation with state officials, will make evacuation decisions, Cooper said.

One more candidate files for Board of Education this…