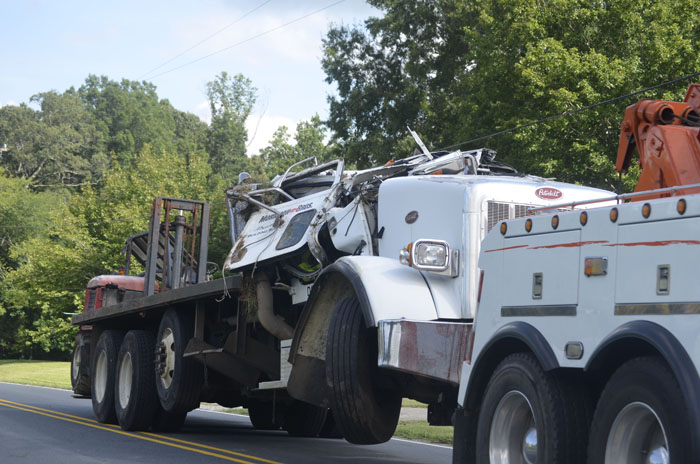 The driver of this truck was hauling bricks when a tire blew and he lost control, overturning in the 7800 block of Stokes Ferry Road near Larin Way, a private drive. The driver was taken to the hospital Thursday. SHAVONNE POTTS/SALISBURY POST

SALISBURY — The driver of a dump truck was seriously injured when his front tire blew Thursday, causing an accident that left bricks spilled across the roadway.

The single-vehicle crash occurred in the 7800 block of Stokes Ferry Road, near Larin Way, a private road.

N.C. State Trooper K.G. Barringer said the driver, Gerald Smith Jr., 57, of Concord, was taken to the hospital by ambulance. He was driving for Morrison Bros. Building Supply just before 1:30 p.m. when the crash occurred.

Smith lost control of the truck, went off the shoulder and came back onto the road where the truck overturned. Smith was temporarily trapped in the cab of the truck, which was upside down.

Barringer said a passerby helped Smith out of the truck and when the trooper arrived to the scene, Smith was being loaded into a waiting ambulance. The truck was towed from the scene by Kluttz Wrecker service.

It took hours for employees with Morrison Bros. to remove the bricks and haul them away from the scene.