NC3 baseball: Hard to believe, but Hales is still getting better 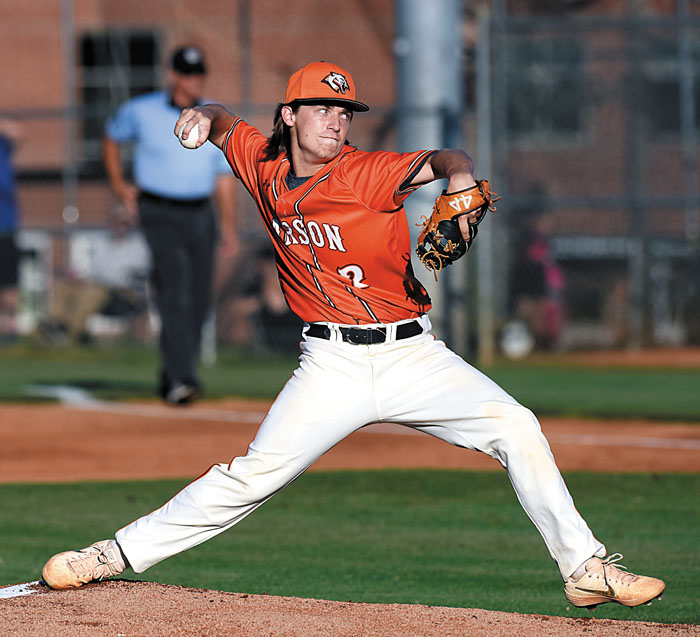 SALISBURY — Heading into his senior season at Carson, Cole Hales had extremely modest career totals of two mound victories and nine RBIs and he had never batted higher in a season than .241.

But he blossomed late, turning in an astounding senior season in 2019 for coach Chris Cauble. He went 11-1 with a 1.37 ERA to beat out studs such as East Rowan’s East Carolina commit Jake Hunter for Rowan County Pitcher of the Year. He didn’t smack any homers, but he hit .350 with 22 RBIs and racked up North Piedmont Conference Player of the Year and All-State honors.

Hales likely would’ve attracted quite a bit of recruiting interest during and after that super senior season, but he’d signed early with Coker University, one of Catawba’s South Atlantic Conference rivals. At the time, people wondered why Coker offered. A year later, the same people wondered why everyone didn’t.

Before that breakout senior year, even Catawba didn’t know much about Hales, even though both of Cole’s parents, tennis player Rob, and field hockey player, Nicole, had  competed for the Indians.. Cole’s grandfather, Robert, a longtime professor of communications at Catawba, did the public address work for Catawba football.

Hales, late to mature physically, but very tough mentally, just snuck up on everybody.

His story is far from over. The evolution of Hales as a ballplayer continues. It didn’t seem possible, but he’s still getting better.

He’s gone from being a solid hitter to being a scary one. He’s slamming balls over the fence now.

It was a basically a non-existent season for Hales on the field down at Coker. The criminology major received just two at-bats in February non-conference games and was redshirted. Off the field, however, he did a lot. He never stopped working in practice and in the cages. In the weight room, he built muscle and confidence. He was a tiny guy as a Carson sophomore, but now he’s a sturdy 185 pounds.

“I made a call to Frank about Cole, but Frank already knew all about him from his senior year at Carson,” Graham said. “Cole will enjoy playing for Frank Pait. It will be a lot like playing for Jim Gantt.”

“Cole is a very good hitter, with some power,” Gantt said. “He’s also an extreme competitor. He wants to be the guy all the time. He gets upset if he doesn’t get it done because he feels like he let his team down.”

Hales hasn’t let the team down often. He’s had three hits in a game five different times. He’s also had a four-hit game and a five-hit game. That five-hit game came Sunday at Concord when he launched a grand slam to cap a 5-for-5 day and drove in five runs.

“They weren’t throwing breaking balls for strikes, so I was able to just sit on fastballs,” Hales said. “NC3 has been great for me.  Live reps are what I needed and we’ve gotten to play 30 games. This summer has been big as far as being ready for the next step.”

Hales will be eligible to play two years at Caldwell, but he’s in good academic standing, so he would be able to move on to a four-year school after just one year. The way Hales is playing now that seems to be a likely scenario. It’s good to have options, and Hales has them.

Defensively, Hales is good at second base and exceptional at third base.

He’s got the arm to play third,” Gantt said.

Hales is likely to be a two-way player for Caldwell.

Hedidn’t pitch for a long time this summer, but he’s been good lately. He’s picked up two wins.

“I hadn’t pitched for a long time, so we took it slowly as far as getting back on the mound this summer,” Hales said. “It was just a break, not an injury. My arm feels fine.”

Hales came through on the mound in relief as Rowan narrowly escaped what would’ve been a stunning loss at Mount Airy.

He threw well for five innings in his start at Concord on Sunday, striking out four, with no walks.

Hales is throwing harder than he once did and his fastball runs in on the hands of right-handed batters. His curveball not only breaks, it has depth. It’s like it’s dropping off a table.

In other words, he’s very tough to hit.

“He has good pitches,” Gantt said. “But mostly what he brings to the mound is sheer competitiveness. That’s what makes him a solid pitching prospect.”