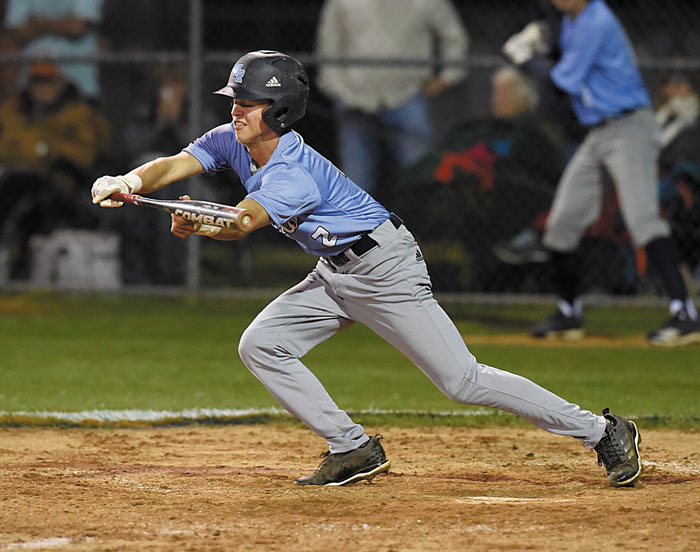 SALISBURY — Putting the work into sports has never been a burden for Daniel Sell.

A baseball/football guy in his time at West Rowan, there were some spring and fall days when Sell, a 2020 graduate, was involved with both sports.

“There were times he played in a tough football game on Friday, and then was playing with his travel baseball team on Saturday morning, and then playing with the West fall baseball team later on Saturday,” West head coach Seth Graham said. “He stayed busy. The only time he might miss a baseball game was when two of his teams played at the same time. He likes to play. You enjoy coaching kids like that.”

Sell likes to hunt, but most of his personal time has been spent on fields and diamonds.

He has two athletic assets working for him. He has good speed and he has a shockingly strong left arm for someone who is 5-foot-10, 155 pounds.

He’s not quite Billy Wagner or Ron Guidry, small lefties who whipped bullets. but he can get his fastball to the plate at 86 mph. Sell’s fastball frequently surprises hitters because it explodes at them like he’s 6-3, 200. He looks like a guy who wants to fool them, but he’s coming at them with heat. He strikes out a lot of people.

In general, right-handed pitchers throw harder, but left-handers get more movement on the ball. So lefties who throw hard are interesting commodities.

Sell had a really strong junior season offensively for West in 2019 as the lead-off man and center fielder, batting .357 and adding 23 walks in 25 games for a stellar .526 on-base percentage. He didn’t get to pitch a lot for the Falcons as Daniel Durham and Cullen Davis handled the bulk of the innings. He was 1-0 and struck out almost two men per inning.

“He was a vital part of our program with his work on the mound and in center field,” Graham said. “He could bunt for a hit and he ran the bases well. Always a good leader and a good teammate.”

Sell did OK on the mound in American Legion ball in the summer of 2019, winning two games for Rowan County and getting to pitch against his first cousin, Carson Simpson, when Rowan battled Davidson County in the Legion playoffs.

He was ready for a breakout senior season in the spring and was counted on as one of West’s frontline pitchers for the first time. He had struck out nine in 10 innings and had five hits and five walks in West’s first five games — but that’s when the season was stopped.

“I pitched in the last game we played, but then I didn’t think I was going to get to play anywhere this summer, so I hadn’t thrown much when NC3 got started,” Sell said. “I tried hard to get ready. The first three bullpens I threw went just fine, but the fourth one didn’t.”

Sell felt a sharp twinge in his elbow. It was painful, but not career-threatening, just a pinched nerve. He was able to heal the elbow with rest.

Sell didn’t get to pitch for the Rowan NC3 team until Rowan’s 23rd game, but he became one of the key relievers in the stretch run. In four relief appearances in the past week or so, he’s fanned nine in five innings.

“His fastball is good enough to give right-handed hitters some problems,” Rowan County NC3 head coach Jim Gantt said. “And he’s got a slider that’s very effective against lefties. He’s been a great guy to have on our team. I just wish he could have had a healthier summer. He would have contributed a lot.”

The good news is Sell, a Mike Trout fan and a Los Angeles Angels fan, has a lot of baseball ahead of him after this NC3 summer.

He’s headed to Rockingham Community College, located in the town of Wentworth. That’s in the Eden/Reidsville area, not far from the Virginia state line.

“They’ll put some good weight on him in college and he’ll be throwing even harder,” Graham said. “He needs to eat a cheesburger a day.”

Former West Rowan infielder Cameron Graham is on the team at RCC. RCC is also where former South Rowan pitcher Walker Joyce was an All-American in 2018 before moving on to East Tennessee State.

“I committed to Rockingham about three months ago,” Sell said. “I’ll be focusing on pitching. Coaches believe I’ve got the most potential as a pitcher.”

Sell will not only be saying goodbye to the outfield when he reports to Rockingham, he’ll also be saying adios to football, a sport that’s been a key component of his life.

He was a receiver on West’s jayvee team as a freshman and the starting quarterback for the jayvees as a sophomore.

He was moved to defensive back on the varsity. He played strong safety as a junior and free safety as a senior. He returned a blocked punt for a touchdown as a junior. He made three interceptions as a senior and was a sure tackler.

“I was playing baseball all the way back to Tee-ball, but I loved football a long time, too,” Sell said. “I know I’m going to miss football. I don’t think it’s really hit me yet. Maybe it will hit me hard in a few weeks if football gets started up.”

Sell has what’s known in Legion circles as a “good birthday.” Age-wise, he’ll still be eligible to play American Legion next summer. He’s assured Graham and Gantt that he’ll be back.

“This summer has been one of my best learning experiences in baseball,” Sell said. “We’ve got three experienced coaches out here working with us (Gantt, Graham and Adam Patterson) and I’ve also learned a lot from (Catawba College player) Lee Poteat.”

With better health and better luck, Sell might be something special next summer.