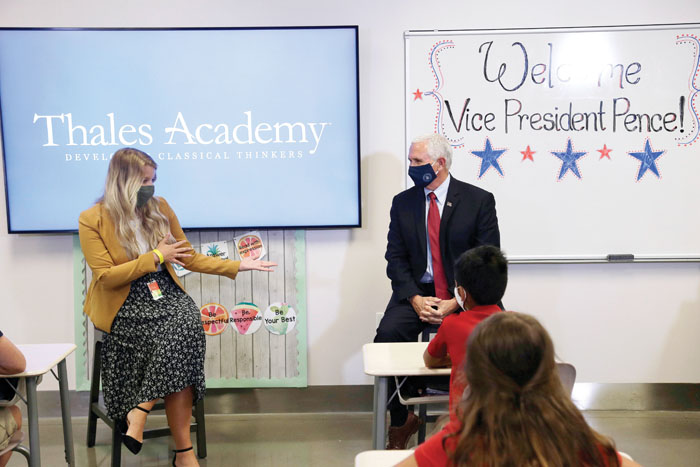 APEX — Vice President Mike Pence vowed Wednesday that schools around the country will have the resources they need to reopen for in-person learning as he visited a classroom of masked fourth graders at a North Carolina private school.

The visit comes as President Donald Trump and U.S. Education Secretary Betsy DeVos have  threatened to withhold federal funding from K-12 schools that don’t allow all of their students to return to physical classrooms. Critics including Democratic presidential candidate Joe Biden have slammed Trump over the threats and argue that his administration hasn’t provided enough resources or guidance to schools.

Accompanied by DeVos, Pence visited a Raleigh-area campus of Thales Academy as part of a push to encourage more schools to reopen with in-person instruction.

“We’re all gonna make sure schools across America have the support to open up and stay open,” Pence said. He added that he was there “to help states be able to have the resources and the guidance they need to reopen schools safely.”

Seated in front of a whiteboard that said “Welcome Vice President Pence,” Pence and DeVos removed their masks while the vice president took several questions from students. The teacher and most of her 11 students had on masks, and desks were placed several feet apart.

After visiting the classroom, Pence participated in a roundtable discussion at the campus that welcomed back 300 students in July. The vice president stressed that “online learning is no substitute for in-person learning” and said data indicate that COVID-19 poses a low risk to most children.

“The one thing we know studying the data from around America and around the world is the risk the coronavirus poses to healthy children is very low,” he said.

Health experts have expressed concern that children could spread the virus and infect their parents or other adults who are at higher risk.

During the roundtable, DeVos said students in North Carolina and around the country need to return to classrooms.

“There’s too many schools in this state and others that are ignoring parents and leaving schools closed,” she said.

Devos also announced $180 million in grants on Wednesday for North Carolina and 10 other states to serve students during the pandemic.

Democratic North Carolina Gov. Roy Cooper announced earlier this month that public schools may offer a mix of both online and in-person instruction, though districts can choose to offer fully remote learning.

“We don’t respond to those kind of threats,” Cooper said in a July 14 news conference of the Trump administration’s consideration of withholding federal funds.

Biden’s campaign issued a statement in response to the Pence visit criticizing the Trump administration for pushing schools to reopen without enough guidance or support.

“Vice President Pence can try to convince educators and students otherwise with this school visit, but the reality is that he has been pushing educators across the country to reopen their doors without putting critical safety measures in place,” said the statement released by Biden’s deputy campaign manager Kate Bedingfield.

After his visit to Thales Academy, Pence went to Durham to tour NCBiotech, which is conducting Phase 3 clinical trials for a coronavirus vaccine. Pence’s appearance comes two days after Trump visited Morrisville to tout the country’s progress in developing a COVID-19 vaccine under his Operation Warp Speed initiative.

Pence urged Americans to visit clinicaltrials.gov if they’re interested in participating in the ongoing vaccine efforts.

“We’ll get through this, and the day will come that we put the coronavirus in the past and we bring North Carolina and America back bigger and better than ever before,” he said.