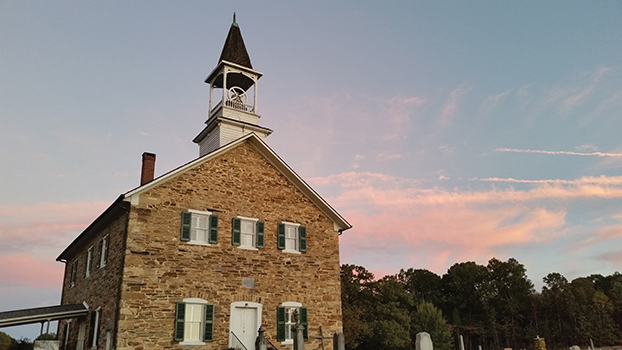 Grace Lower Stone Reformed Church on Sunday will celebrate the 225th anniversary of the completion of their rock house of worship.

The event will also celebrate the church’s annual homecoming.

Due to the pandemic, the congregation has decided to forgo the traditional homecoming meal after Sunday’s service. The community is cordially invited to come join in this festive celebration, which will be this Sunday at 11 a.m.

The congregation, organized by Rowan’s earliest German settlers around 1750, originally met with the congregation of Organ Zion Lutheran Church in a log building at the current site of St. Peter’s Lutheran Church. This temporary building was located on Jacob Fulenwiler’s plantation. When he died in 1771, both Grace and Organ moved to the current site of Grace Lower Stone, which was on Lawrence Lingle’s plantation. There they constructed a second log church.

When Lingle made the deed for the second church’s property to Grace Church in 1774, Organ’s congregation left the Lingle plantation site and moved to their current location. With the help of Grace’s congregation, Organ’s congregation built a third log church at their new site. Organ Church began building their stone house of worship in 1792 and completed it in 1795. Grace Lower Stone began building their stone house of worship after Organ began their building and completed it in 1795 as well. Above each of the three doors of Grace’s building are carved into slate tablets German dedicatory poems.

An anthem, “This Church Which You Do Here Behold,” which is based on these three dedicatory poems, will be sung at Sunday’s celebration. During the anthem, the poems will be read in German by John Allmon, and then sung in English by Leslie Kepley and Brent Agner. The anthem’s tune is based on the old German chorale, “Macht Hoch Die Tur” (Fling Wide The Door.)

A son of the congregation, Aaron Kepley, executive director of Rowan Museum, will present a synopsis of the Grace’s stone building’s construction during Sunday’s service.

The congregation still possesses a German document, written in late 1798 or in 1799, which gives brief details about the building’s erection. This document, as well as a German Bible owned by one of the congregation’s early pastors, will be on display.

Grace Lower Stone is located at 2410 Lower Stone Church Road, outside Rockwell. The congregation is currently worshiping in their Sports Complex Shelter, which is located directly across the road from the 1795 rock church.

I-85 lane, ramp closures will last until August 10