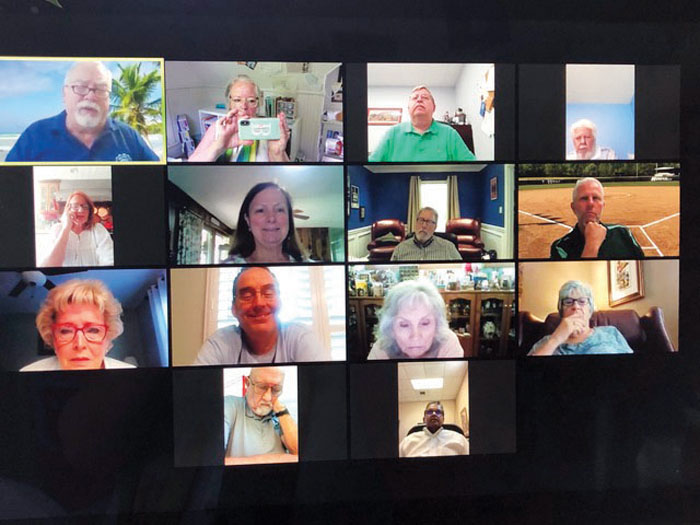 SALISBURY — The state gathering restrictions brought on by the COVID-19 pandemic and subsequent shutdown have brought a halt to regular meetings and fundraisers by area civic organizations for months now.

Many of those local organizations have canceled events and conducted meetings remotely.

The Civitan Club of Salisbury was just a month away from its spaghetti feast but during the height of the pandemic, and the organization had to cancel the annual fundraiser, which supports many local and regional activities. Those include the Special Olympics, the Arc of Rowan, the Civitan Research Center and Victory Junction Camp. The club also awards more than $14,000 in scholarships to high school and college students.

The club is hopeful it can hold the event sometime later this year.

“The Civitan Club of Salisbury is a very active club with multiple service projects, fundraisers and weekly membership meetings so, understandably, we were not very happy when the COVID-19 virus caused an abrupt halt to our activities,” said President Carlton “Rexx” Rexrode.

The once-a-week luncheon meetings that have been held at the Country Club of Salisbury were also halted, he said, which severely curtailed member socialization. In addition, the club’s service projects, including Special Olympics, were put on hold.

“But we vowed to not be discouraged by something over which we had no control. We continued to meet through the Zoom video conferencing portal, at first just with members and now with guest speakers,” Rexrode said.

He said the club recently held its annual elections via meeting software Zoom and has arranged to host its Civitan North Carolina District West meeting, which consists of 48 Civitan clubs, in August, through Zoom.

Rexrode said the club feels a major sense of responsibility for the health and safety of its members as well as the community so they elected to not cut any corners when it came to coronavirus safety guidelines.

“We will meet virtually as often as it takes, holding virtual meetings on Zoom and conducting our club business in an official but lighthearted manner kind of like Hollywood Squares meets the Brady Bunch,” he said. “We do not expect the virus to go away anytime soon but, when it does, the Civitan Club of Salisbury will be ready to jump back into our normal activities. Until then, it’s “virtual business” as usual,” Rexrode said.

Early on during the pandemic, the Kiwanis Club of Salisbury canceled its meetings, said President Glenn Taylor.

He said once the club realized it would take some time for things to reopen the board of directors, under recommendations from Kiwanis International, began conducting meetings via the video conferencing platform, Zoom.

“We had hoped to continue our regular meetings after the 4th of July but that didn’t work out and just this past Sunday our board elected to continue Zoom meetings until after Labor Day,” Taylor said.

Taylor said he is hopeful that they will be able to meet then.

The Salisbury-Rowan NAACP, another longstanding civic organization in town, has also needed to adjust the way it gets its members to socialize and collaborate.

“As a national advocacy organization whose mission is to secure the political, educational, social, and economic equality of rights in order to eliminate race-based discrimination and ensure the health and well-being of all persons; it is imperative that we remain on the front lines even in crisis and pandemic,” said Gemale Black, president of the Salisbury-Rowan NAACP. “The health and wellness of members and coalition partners are our priority in times that we are currently living in and therefore we currently are not hosting in-person meetings, however, the work of advocacy must continue.”
He said meetings are conducted virtually through Zoom. There are conference calls on the first Thursday of the month. And while some clubs have seen a dip in participation, Black said the NAACP is seeing boosted participation. Communication has improved “tremendously,” he said.
Black said the organization uses social media and email to distribute information, including COVID-19 testing sites and resources needed to assist members of the community.
The organization implemented a health and wellness newsletter from its health committee and is preparing to launch a Community Conversation Series and Front Line Voices Series via live broadcasts. Black said the NAACP also is making plans for virtual candidate forums and its first virtual Freedom Fund Banquet.
“As an organization, we have not existed 112 years because we remained stagnant. However, we have remained because of our ability to adapt to change,” Black said.
If anyone is interested in joining or supporting the work of the local Salisbury-Rowan NAACP, Black said, now is the time to do so. He encouraged the community to follow the organization’s Facebook page and sign up for an email list.
The Salisbury Rotary Club, meanwhile, closed the Rotary Hut located on West Liberty Street during the height of the shutdown. By the end of April, then-president Steve Fisher decided to resume meetings virtually, said newly installed President Elaine Spalding.
In the beginning, Spalding said, the club had about 30 to 35 people who met virtually via Zoom. Now,  they average about 50 Rotarians and guests online.
“It’s been really good. We allow some time at the beginning for some fellowship and then we go through our regular meeting,” Spalding said.
Spalding said she’s aware of the Rowan Rotary Club meeting via Zoom and the China Grove Rotary Club, which has fewer numbers, meets socially distant in-person at Gary’s Barbecue.
Spalding said they are waiting for Gov. Roy Cooper’s next announcement to determine its next steps. She said the meeting location has been environmentally cleaned, which is ready for club members to return whenever the time comes.
She said the club also plans to change some policies that include the way their luncheons are conducted. Typically, the group has family-style lunches where food is passed around the table. Members will now have boxed or individual lunches.
“We just want to make we are as safe as we can be,” she said.
Spalding said the club has also discussed continuing meetings via Zoom for those who may not feel comfortable with in-person meetings.
“Salisbury Rotary Club celebrated its 100th anniversary this last year. So it’s been around a long time,” she said. “We will survive this crisis too but we just want to make sure we are taking real good care of our members and being very conscientious particularly about some of our more senior members.”