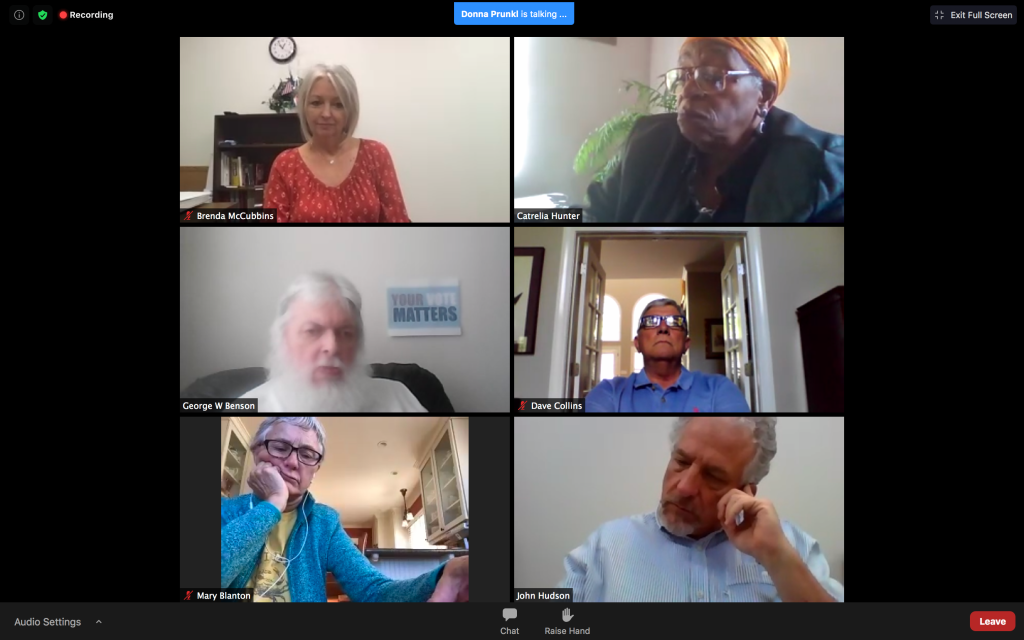 The Rowan County Board of Elections meets virtually on July 28, 2020, to discuss plans for Early Voting in the 2020 general election.

SALISBURY — The Rowan County Board of Elections on Tuesday failed to unanimously agree on an early voting plan for the general election and will instead await the state’s decision for which plan will be implemented.

Adding early Sunday voting days has been a discussion among board members and the general public since before the primary election in March. But in light of the pandemic, on July 17, North Carolina Board of Elections Executive Director Karen Brinson Bell ordered that counties open a minimum number of early in-person voting sites this fall, which includes weekends, to strengthen ballot access.

This year, based on Brinson Bell’s order, Rowan County must hold at least 10 hours of voting on each of those weekends.

Three plans were discussed at the county’s board of elections meeting on Tuesday. Plan A would include early voting from Oct. 15 to Oct. 31, and allow early voting on the first two Saturdays from 8 a.m. to 6 p.m, and the third Saturday from 8 a.m. to 3 p.m. Voting would be from 8 a.m. to 7:30 p.m. Monday through Friday.

Plan B would allow early voting for all three Saturdays between Oct. 15 and Oct. 31, with voting windows from 8 a.m. to 3 p.m. It would also include two Sundays with a voting window of 1 p.m. to 4 p.m.

Plan C is similar to Plan B, except that it would extend the voting period on both Sundays.

Prior to the discussion among board members was a public comment period in which numerous people spoke in support of the “People’s Plan.” That plan, given the name by Board of Elections member George W. Benson at the July 8 meeting, would include all 17 possible voting days, which includes three Saturday voting days and two Sunday voting days.

Board members also heard a number of public comments in support of “the People’s Plan.”

“We should not continue to put barriers to voting in place,” said Veleria Levy, who lives on the Rowan County side of Kannapolis. “Voting is for all, with no barriers.”

Donna Prunkl, of Salisbury, said not everyone has access to the polls via transportation, which is a challenge particularly among the elderly and disabled.

Rev. Roy Dennis Jr, pastor at Gethsemane Missionary Baptist Church, said he was appalled that the nation is still talking about voter suppression in 2020. As a decorated veteran who fought in the first Desert Storm, Dennis said, “I’m thankful that I go fight war in another country, but then can’t vote in my own country.”

He added that suppressing voters results in oppression.

“It’s called full democracy,” said Geoffrey Hoy, the Rowan County Democratic Party chairman. He added that one consideration if safety is a concern is to spread out the times and locations of voting sites to keep poll workers safe.

The board decided to vote on each individual plan. County Board of Elections members Dave Collins and Mary Blanton both voted in favor of Plan A.

With 10-hour voting periods on Saturdays with Plan A, Blanton said, someone hasn’t “really tried very hard” if they can’t make it to the polls.

“It seems to me that more effort could be put into making sure people who want to vote but have difficulty getting themselves to the polls, for whatever reason, on any of the early voting days or on the actual day of the election,” she said.

Benson and board secretary Catrelia Hunter opposed Plan A, but voted in favor of both Plans B and C.

Benson said the “vast majority” of comments he’s heard from Rowan County citizens have been in support of Sunday voting.

Hunter said it’s important for the board to provide every opportunity possible for people to vote. She added that it’s concerning when she hears someone say, “We just shouldn’t do it,” and that all citizens have the right to vote and “all share equally in supporting our county.”

Blanton and Collins voted in opposition of plans B and C.

Since the vote wasn’t unanimous, all plans will have to be submitted to the state. The state will then decide at its Aug. 31 meeting which of the three voting plans Rowan County will have to implement. It is unclear when the county will be made aware of the selected plan.

Elections officials also anticipate a significant increase in the number of mail-in absentee ballots submitted for the 2020 election.

Absentee requests may now be emailed or faxed. Only one witness will be required on absentee ballot return envelope. Ballots will be mailed beginning Sept. 4, allowing 60 days of absentee voting for registered voters who complete an absentee ballot request form.

Board of Elections Director Brenda McCubbins said the county currently has about 1,000 requests for mail-in absentee ballots, which is much higher than the number of requests at the same time in 2016. Staff aim to have those requests are processed within a 24-hour period, she said. And all that have been received have been processed, she said.

Funding for the additional voting days and safety of voters and poll workers has been another concern among board members when deciding on a voting plan. On March 3, the Board of Elections requested from county commissioners more funding for Sunday voting following many public comments, debate and two tie votes. While the board requested $927,196 from the county for fiscal year 2020-21, it only received for $722,410. In the fiscal year that ended June 30, the board was allocated a little more than $700,000.

McCubbins said the county will receive $170,000 from the state from House Bill 1169. Additionally, the county has allocated $52,000 to the Board of Elections from a recent grant of $2.56 million from the state’s Coronavirus Relief Fund. Those funds will allow for general election supplies, plexiglass shields at each table, floor spacing markers and hand sanitizers and disinfectant wipes. Individual pens and face masks will be provided for every voter. Precinct officials will be required to wear face masks, and curbside and line officials will wear face shields.

Additionally, counties must have at least one early voting site for every 20,000 registered voters. The county currently has the following sites established as early voting locations:

McCubbins said it would suffice as voters will only be walking passed others.

She added that the goal at each precinct is to keep people outside as much as possible.

Benson also said that, while the Rowan Public Library West Branch in Cleveland won’t be open to the public for another three months, perhaps some of the rooms in the library can be used for early voting.