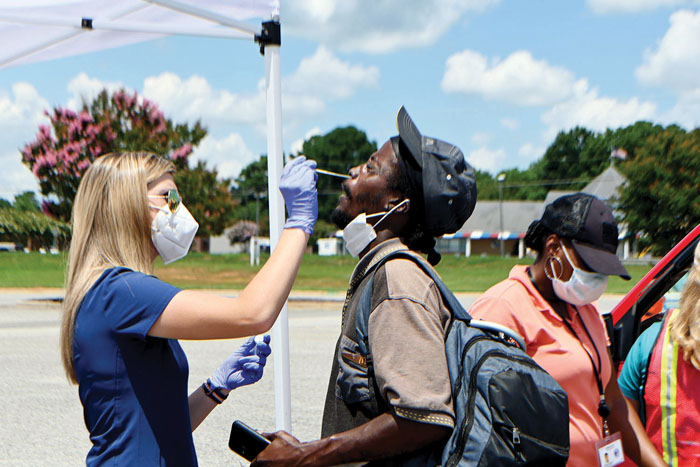 SALISBURY — County health officials are working to give a once-a-week statistic about the percent of positive COVID-19 cases, which aims to help locals better understand the rate of community spread.

So far, inconsistencies with the gathering and reporting of state and county data have been a barrier to the county publishing daily the rate of positive cases compared to all tests. Initially, labs were not required to report negative test results. Brown said county health officials recently discovered the state had almost double the number of negative tests and only sent a report of the negative result amount weekly. 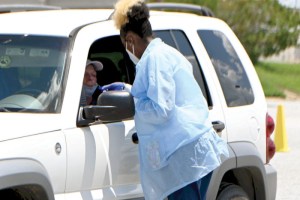 With the data currently on the hub, the local positive rate is nearly 18%. But the state says the rate is 7% on a newly added section of the N.C. Department of Health and Human Services data hub. Brown said that is closer to being accurate. Federal health officials, he said, recommend the rate be closer to 5%.

If the percent positive number rises, it could be indicative of a higher rate of community spread, which is why health officials urge the use of face masks in public, social distancing, washing hands and sanitizing high-touch surfaces frequently.

A higher number can also be due to more testing — something that’s been much more widely available of late. Criteria for testing has also been expanded to include anyone who might have been exposed to COVID-19. But testing too many people who may not have had any exposure or symptoms of COVID-19 could result in dwindling testing supplies and availability.

The solution, then, is to find the right balance between an appropriate rate of testing and minimizing community spread, Brown said.

Rowan County falls in line with the state’s current positive rate of 8%, with a total of 114,338 confirmed cases across the state after 1.64 million completed tests. A total of 1,169 people are currently being hospitalized and 1,790 people have died. Every Monday, the N.C. Department of Health and Human Services updates its count of patients presumed to be recovered, which is currently at 92,302 people.

Locally, an additional 26 people had tested positive for COVID-19 in Monday’s update — for a total of 1,894 cases. The number of currently positive cases dropped by 10 on Monday and is now at 286, while 1,560 people have recovered.

A total of 240 at congregate care facilities have tested positive, and the county currently has five active outbreaks at local congregate care facilities. A total of two employees and five residents have tested positive at a community home located on Camelot Drive as well as one employee and one resident at a community home on Hummingbird Circle. Those are in addition to six employees at the W.G. “Bill” Hefner VA Medical Community Living Center, 15 employees and 37 veterans at the N.C. State Veterans Home and two employees at Elmcroft.

The number of deaths remained at 48 on Monday, with all but 11 from congregate care facilities and an average age of 81. A total of 15 people are being hospitalized.

County health officials on Monday reminded the public that the Food and Drug Administration is warning consumers and health care providers of a sharp increase in hand sanitizer products that are labeled to contain ethanol, also known as ethyl alcohol, but that have tested positive for methanol contamination. Methanol, or wood alcohol, is a substance that can be toxic when absorbed through the skin or ingested and can be life-threatening when ingested.

The agency is aware of adults and children ingesting hand sanitizer products contaminated with methanol that has led to recent adverse events including blindness, hospitalizations and death.

Consumers who have been exposed to hand sanitizer containing methanol and are experiencing symptoms should seek immediate treatment for potential reversal of toxic effects of methanol poisoning. Substantial methanol exposure can result in nausea, vomiting, headache, blurred vision, permanent blindness, seizures, coma, permanent damage to the nervous system or death. Although all persons using these products on their hands are at risk for methanol poisoning, young children who accidentally ingest these products and adolescents and adults who drink these products as an alcohol substitute, are most at risk.

To search the list of recalled brands, visit fda.gov/drugs/drug-safety-and-availability/fda-updates-hand-sanitizers-methanol#products.

COVID-19 continues to disproportionately affect Hispanic residents of the county as 30.15%, or 571 cases, make up the total cases despite Hispanic residents only comprising less than 10% of the county’s population. A total of 1,046 white residents have tested positive, along with 245 Black residents, five Asian residents, five American Indian/Alaskan Native residents and one Native Hawaiian/Pacific Islander resident. A total of 317 cases are categorized “unknown,” while 275 are other.

A total of 954 women comprise the total number of cases, followed closely by 940 among men.