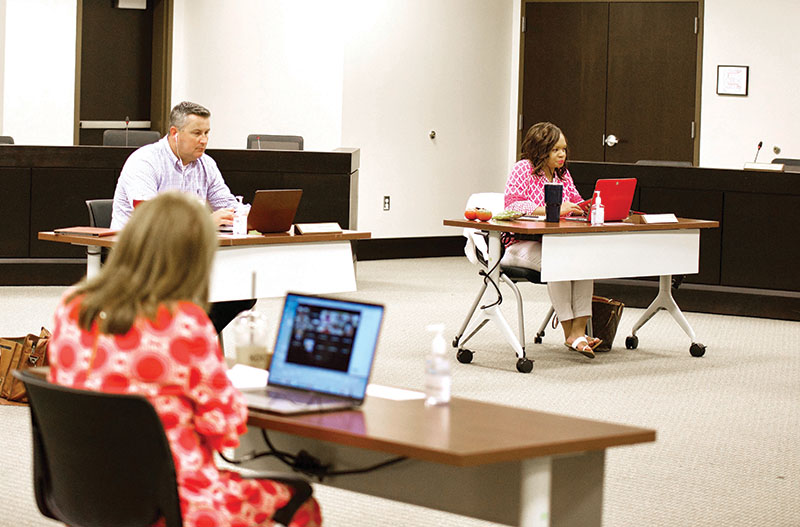 Carl Blankenship/Salisbury Post - Board members Dean Hunter and Alisha Byrd-Clark at the meeting. The board met in person with a handful of administrators in Wallace Educational Forum and live streamed the meeting for the public.

SALISBURY — The Rowan-Salisbury Schools Board of Education on Monday chose “Summit K-8 Virtual Academy” as the name for the district’s newly-formed virtual school and continued sorting through the logistics of reopening schools in the fall.

The name was the result of a recommendation by a committee of community stakeholders. The school’s mascot will be the Hawks. It came with the recognition Alex Clark of the school’s first “standard bearer,” a symbolic position meant to honor local leaders. Summit Principal Amy Pruitt noted the meaning of standard bearer applying to someone who supports others.

Clark is the late husband of board member Alisha Byrd-Clark. Clark was a youth advocate who founded Gemstones and COMPASS Leadership Academy with Byrd-Clark in 2015. A new standard bearer will be named each year.

Board member Josh Wagner requested, given the district’s plan to keep the virtual school as a permanent option, it create a page on its website to honor each standard bearer.

Associate Superintendent of Schools Kelly Withers also presented an update about the virtual school’s population, which has swelled to more than 3,000. That’s more than twice the size of Carson High School, the second largest school in the district. Superintendent Lynn Moody said some students still want to get into the school who did not apply by the deadline and have been placed on a waiting list, but some students have already asked about a transfer into a traditional school. Moody said the district will accommodate students as it can and and wants to place students where they want to be.

• The district was given federal emergency leave to cover employees who are unable to work or telework due to the pandemic. That leave combines with standard Family and Medical Leave Act provisions regarding leave. Employees will be entitled to two-weeks paid sick leave at regular pay rate for circumstances directly related to COVID-19 like infection, care for someone who is infected or childcare issues directly related to COVID-19.

Associate Superintendent Carol Herndon said there are normally 300 to 350 people requesting leave in a normal year, and is already having 150 of those conversations before classes have begun. The district is developing its own practices to ensure consistency with how leave is applied as well.

• The board also received an overview of child care options for district employees.

Many staff will be working in schools four days instead of the two days for which their children will attend schools. That leaves a gap in childcare for some families. And it’s a gap the district could fill. The district formed a committee, which spoke to principals about the issue. The East, South and Southeast areas all had the greatest need for childcare based on a staff survey.

The first option would place remote learning day supervision in all schools in the South and Salisbury and North communities. The second would place childcare in all community elementary and high schools in the southeast, East and West communities. The third option will include locations at school for RSS staff who work in other facilities like Horizons Unlimited or the Carter Building.

Street said the options apply based on where a staff member works rather than where they live. Street said 75% of demand for childcare demands rests with people who work in elementary schools.

Board Chair Kevin Jones asked Street why the second option was needed because of its lack of distinction from option one, and those communities thought they could provide childcare help at middle and high schools while still meeting safety guidelines. Street said she continues to have meetings with community principals and they have discovered more ability to place children in local high schools.