Those are the sounds once made by Batman and Robin’s battering fists as they struck the jaws of Gotham City’s criminal element.

Nearly identical sounds were made by Rowan County bats in the latest installment of NC3 baseball. It was only the fourth inning, and Rowan County’s Cole Hales already had four hits, while Charlie Klingler already had two doubles and a triple.

Concord’s pitching staff, enduring its fourth game in two days, was sputtering on fumes and was pounded 20-7 by Rowan County late Sunday afternoon at Hinson Field. 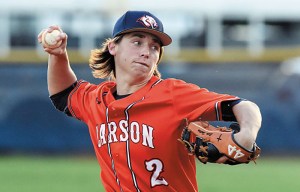 WAYNE HINSHAW FILE PHOTO/FOR THE SALISBURY POST …
The Salisbury Post’s Rowan County Pitcher of the Year, Carson’s Cole Hales, above left, is shown during a Western Regional series Game 1 win against Marvin Ridge on May 21.

Concord played a high-scoring doubleheader at Randolph Saturday night and had already been thumped 13-2 by Union County in an early game on Sunday. Then it was time to pitch to a fresher Rowan squad.

Sunday’s romp really wasn’t indicative of Concord’s team. Concord (7-11, 6-10) has been competitive and owns wins against Greensboro, Mocksville, Lexington-Davidson and Randolph County, among others. Concord comes to Newman Park on July 31 for Rowan’s finale, and it may look like a completely different squad.

Six Concord pitchers tried their luck on Sunday, but Rowan broke loose for a 10-run fourth, as well as a four-run second and a five-run fifth.

Hales went 5-for-5. His fifth hit was a grand slam, his third homer, but his first since early in the summer. That blow made it 19-2. He scored three runs and knocked in five.

Klingler, a line-drive machine who should be successful in his bid to walk on at High Point University, knocked in three and scored four.

“They were throwing mostly fastballs, and everybody was seeing the ball well,” Hales said. “Everyone had a good day.”

There was a scary moment when Caden Hudson lined a shot that struck Concord pitcher Addison Long and knocked him out of the game.

Hales pitched five breezy innings for the win, striking out four. It was 19-2 when he called it a day.

Daniel Sell pitched the sixth and struck out two, while allowing one run.

Concord pieced together a four-run seventh, with a hit batsman, three walks, a single and two run-scoring groundouts to create the football-like final score.

Burns took the mound and got the last three outs.

Rowan (21-7, 12-5) is in second place behind High Point and plays at Stanly on Monday, at High Point on Tuesday and against Concord at Newman Park on Friday to wrap things up. Class of 2020 players will be honored on Friday.

NOTES: In Union’s 13-2 win against Concord, Max Hyman had four hits. … Stories on Hales, Sell and the season are coming up in the next week or so.