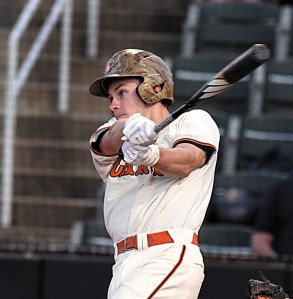 OAKBORO — Cameron “CP” Pyle slugged his first two homers of the summer, and Rowan County rolled to a 14-4 victory at Stanly County on Monday night in NC3 baseball.

Pyle’s three-run homer to left in the third inning gave Rowan a 6-0 lead.

He added a solo blast leading off the sixth and became the first Rowan player to hit two longballs in one game this season.

Rowan plays league-leading High Point Tuesday at Finch Field at 7:30 p.m., with the starting time moved back to accommodate a summer collegiate game.

Rowan will conclude the season Friday at home against Concord and will honor the Class of 2020 players on the squad.

Pyle wasn’t alone in staging a vigorous assault on Stanly pitching. Rowan had 16 hits and scored in every inning except the second.

Wayne Mize and Jordan Goodine had two hits each. Logan Rogers and Dylan Driver had two RBIs each.

Driver got one of the key hits early. His two-run single in the first put Rowan ahead to stay.

After Pyle’s homer made it 6-0 in the third, Stanly (6-10, 6-9)  fought back to score three times in the home third. Garrett Maner socked a two-run double.

But Rowan came right back with three more runs in the fourth against Stanly starter and loser Cody Kidd. Hales singled in a run and scored on a wild pitch. Logan Rogers’ had a run-scoring single to push the lead to 9-3.

Goodine tripled and scored Rowan’s 14th run on an error in the seventh. Rowan was able to end the  game via the 10-run rule by holding Stanly to a single run in the bottom of the inning.

On the mound, Ryan Street was sharp for the first two innings before running into trouble in the third.

Driver relieved him and earned his fourth win. Driver kept Stanly off the board in the fourth and fifth. Chase Shoaf tossed the sixth, and Daniel Sell handled the seventh.

By Mike London mike.london@salisburypost.com CONCORD — Bam. Kapow. Whammo. Those are the sounds once made by Batman and Robin’s battering... read more