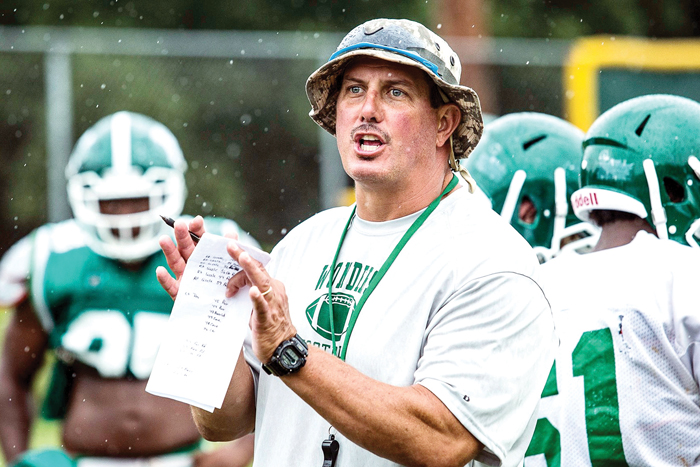 Photo by Tyler Buckwell Coach Todd Hagler, coach and strength and conditioning expert for the A.L. Brown Wonders for 20 years, is heading to River Bluff High in Lexington, S.C.

Coach Todd Hagler, coach and strength and conditioning expert for the Wonders for 20 years, is heading to River Bluff High in Lexington, S.C.

I have known of and been around “Koach Hag” since he came to Kannapolis, as I was a ball boy with Zach Massey on Friday nights in 2000 and 2001.

However, Koach Hag more personally entered my life in 2006 when I was a freshman at A. L. Brown and signed up for a weightlifting class.

From the first sentence on the first day of class, he had my attention; he had all of our attention.

“Men,” he said, “this room is where the weak become strong and the strong become great, and I see greatness in every single one of you.”

His tone. His demeanor. Wow. I had cold chills then, and I did just now as I typed that.

When Koach Hag said that, as with everything, he meant it. Kids in that class that had known him for just those 23 words were completely bought in to whatever he was going to say or ask of us all.

Not everyone in that room had someone who believed in them, or truly thought they could be great. I had heard it before, but it felt different coming from someone who didn’t even really know me, but believed in me with everything he had. The weight lifted off of you when you feel loved, cared for, respected, and believed in is incredible. Koach Hag lifted that for thousands of kids in his time at A.L. Brown.

Like many others, after that first semester of having Koach Hag, I wanted to be in his class every semester of every year. That schedule wish wouldn’t work out, but I was able to be in there five more semesters over the course of my high school career.

Neither his passion, his love, his grit, nor his empowerment of others faded over that time.

The max out days were, by far, the best days of that class.

No matter what block you had his class that day, you were absolutely jacked up because of the atmosphere you knew was going to be in that weightroom. When it was time for class, you could already hear Koach blaring one of his go-to hype songs, “Kryptonite” or “Bodies” (he still plays them today if you’re WONDERing).

Everyone was ecstatic and ready to get a new max, but Koach Hag was still the most excited person in that room because he got to see you, his student, the person he knew had greatness within, give everything you had to better yourself and reach new goals.

I acutely remember him walking around, cheering on classmates by name or nickname he adorned them with, yelling his famous motivational sayings, and giving the all-important slap on the back for squats or hang cleans, and chest for bench press.

I promise you Koach Hag is so powerful that weight is afraid of him. It’s a proven fact.

When Koach Hag gathered your classmates around your rack, when he was telling you how bad he wanted you to move that weight, to shove it, to throw it, to lift it, when he gave you that slap on the back or chest, that weight got light and you moved, shoved, threw, and lifted it more than you even thought you could.

When I came to A.L. Brown as a teacher, I didn’t really understand classroom management, and I certainly didn’t understand how to create a classroom atmosphere and culture like Koach Hag did.

So, I walked over to the weight room and I watched, listened, and took notes.

Koach Hag isn’t just a strength Koach or an offensive line Koach, he is molder of young minds and people.

Not every person in his classes were in there for the same reasons, or worked at the same level, or were as bought-in as others.

He knows that, and he still gave every single kid walking over his threshold the opportunity to feel loved, motivated, and believed in. That is how he began to create his classroom management and atmosphere. No matter your thoughts on Koach Hag or his class, you knew for an absolute certainty that you were going to be held accountable for everything you said and did…or didn’t once in his weight room.

As a teacher, I often referred to Koach Hag’s classroom as a machine, so close to perfection it’s hard to tell how it’s not. Every type of student and person at A.L. Brown is represented in his classes, and Koach Hag always has everyone meshed together, working for common goals, and supporting each other. Feeling like you don’t belong or don’t fit in is a heavy weight to carry. Koach Hag lifts that weight for so many kids, opening possibilities and opportunities they never thought possible.

I’ll always carry my notes regarding these attributes of Koach Hag’s class.

Koach Hag made an effort to learn your name as quickly as possible.

He also made an effort to make sure he knew you as the entire person you are: student, athlete, artist, whatever makes you you.

If you want to make an impact on people’s lives, especially kids, you’ve got to want to know and understand who they are beyond the 90 minutes you see them a day.

There are many instances I can recount for you that truly showcase how much Koach Hag’s students meant to him, but I’ll tell you about the most recent one.

I was in the weight room after school a few months ago when Koach Hag got a phone call that one of his student’s father had passed away.

Koach went straight to his office, looked up this student’s home phone number, and called. A family member of the student answered and Koach Hag asked to speak to his student. The family member explained that now wasn’t a good time because of the passing of his father. Koach Hag responded with, “I know, ma’am, I just wanted to tell him I loved him and was here for him.”

There was a short pause until the student came on the phone. He and Koach talked for a minute or two.

Koach Hag would ask a question, then just listen, and then speak words of reassurance and comfort. Koach ended the phone call with, “I just wanted to call and make sure you were OK and tell you I loved you, brother.”

As I stood in the weight room wiping a tear from my eye, all I could think about was how powerful it is for someone you respect and believe in to call to make sure that you are OK during one of life’s toughest hurdles and to remind you that you are loved. Koach Hag lifted weight like that each day he worked at A.L. Brown.

Koach Hag has impacted thousands of lives for their betterment and his, and he will continue to do so at his next school. It’s been one of the greatest and most important aspects of my life to know and learn from Koach Hag; I believe many people feel the same.

Whether it was off our chests, from the floor, over our heads, out of our heads, or off of our hearts, Koach Hag has helped us lift all life’s weight…even when we thought we couldn’t.