Doctor from Salisbury helps family with nonprofit while living in Chicago 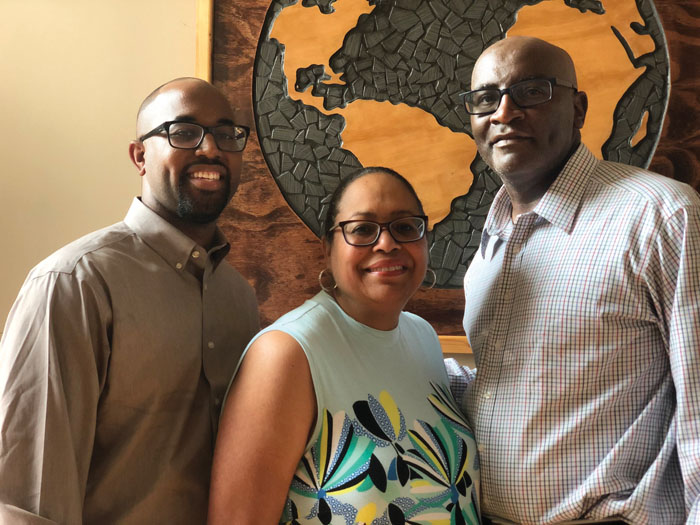 SALISBURY — One Salisbury native may have taken his medical talents to Chicago, but he’s helping his family make an impact with equity and inclusion with his nonprofit back home.

Dr. Chris Smyre is the son of locals Bishop Russell L. Smyre, Sr. and Dr. Patricia R. Smyre. The family owns a nonprofit organization called “Faith n Action,” which has the goal of building people of purpose and adding value to their life economically and holistically and promote equity and inclusion in the community through healthy relationships with one another. The organization approaches these goals is by promoting education, healthy parenting in families and overall health and wellness.

Chris, who is officially vice president of Faith n Action, is currently an assistant professor of clinical, family and community medicine at Southern Illinois University, where he’s the first Black man to serve as a faculty member. Chris is also the first Black man to graduate from the family medicine program at McGaw Medical Center of Northwestern University in Chicago — from which he graduated earlier this year.

Chris is a 2006 graduate of Statesville High School, where he moved during his teenage years, and earned his bachelor’s degree in chemistry, with a focus in biochemistry and biophysics, from Wake Forest University.

Despite living and working in Chicago, Chris is helping his family serve the community through their nonprofit.

His professional work focuses on empowering patients to get the care they deserve and have their concerns and needs met, particularly by eliminating current health inequities and disparities in the health care system, and now Chris is applying those same concepts in health care to the current conversations regarding racial injustice and police brutality. He said both health care workers and police officers require trust from the community in order to do their job well.

“It’s very unique in similarities that in both policing and health care, as physicians and as police officers, you’re in privileged places of power,” Chris said.

Those conversations are part of a broader discussion of policy and community engagement — what one of Faith n Action’s workshop series, called “Unity in the Community,” addresses. The series includes four modules that aim to achieve equity and inclusion by explaining the behaviors and norms of people, as well as providing a space for everyone to share their narratives and experiences in an effort to reach awareness and understanding and, ultimately, action.

“We’re all a part of some system in some way,” Chris said. “We’re all trying to learn how best to navigate that system.”

Some discussion for community leaders center on making workplaces a more inclusive and equitable environment. For example, Chris said leaders must ask themselves if they’re really looking a diverse pool of applicants to truly hire the most qualified person. If not, leaders should evaluate if they’re, instead, reinforcing their own biases without realizing it. Additionally, it’s important to ensure minorities have the opportunities to grow within a company or be promoted to higher roles.

Another aspect of the conversation is to understand privilege. Chris said it doesn’t mean someone else has more than another person, but that one person may not have the same barriers as another person when it comes to accessing various systems or seeking resources. He added there are multiple forms of privilege.

“I think everyone has privileges in some ways, and I don’t think there’s anything wrong with privilege,” he said. “I just think we should use our privilege in responsible ways that are promoting other people to have access to that privilege. … With the privilege I gained to become a physician, I want to speak about these issues. I want to talk about how we can do better.”

Mayor Karen Alexander, who has attended the virtual workshop series, said she appreciates how Chris stops periodically to allow people to react with what was just said or presented. This allows people to evaluate if their reaction was right or wrong.

One concept the series touches on is the idea behind “intent vs. impact.” Chris says these are mutually exclusive in that sometimes one’s intention doesn’t match the impact the action or words had on another person. A real-life example he cited was employers reaching out to their Black employees days after the killing of George Floyd. While some Black people may have been OK with a coworker checking on them in a formal work setting, others may prefer that conversation be held in private.

Chris added that people recognize and can appreciate when someone is actively trying to change. Part of growth is not having inhumane expectations of people and understanding mistakes will be made and the wrong things may be said. People have to accept being wrong, he said.

But the ultimate goal is action and changes made. An impact cannot be made without action, and action cannot be taken until there’s awareness.

“If there’s no action at the end of the conversation, then we actually haven’t changed anything,” he said.

Chris said no one has to go about making these changes blindly as many scholars and experts have published research and solutions on these exact issues.

And like any medical emergency, in a community, the most ill have to be taken care of first.

Patricia said she started encouraging all three of her sons early to be confident as they would one day be African-American men in positions of leadership and they had to know what they were talking about and be confident about what they know. She said that same concept of confidence has to be instilled back into the community.

“We’re going to make mistakes,” Patricia said. “Matter of fact, we’re going to say some things that are going to be hurtful. But we have to start taking on a more mindful approach to communicating with each other. Suspending judgment. Being present in the moment to engage in a productive conversation.”

Patricia encourages anyone who’s interested in getting more information about the workshop series “Unity in the Community” to reach her via phone at 704-902-7890 or via email at patriciasmyre@gmail.com.