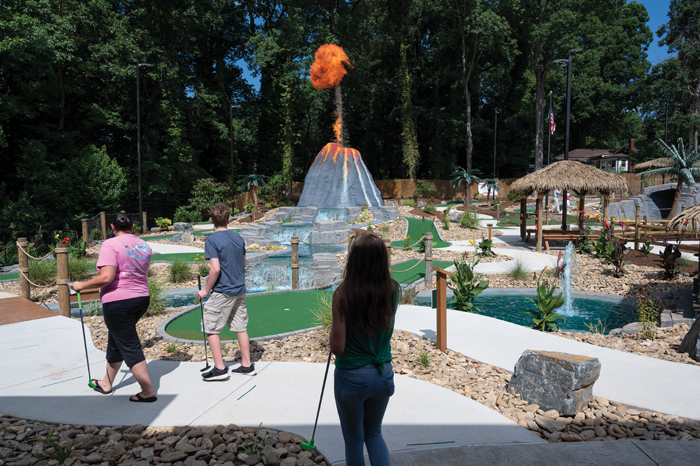 KANNAPOLIS — Brian Freeman isn’t a newcomer to starting a business, but his latest venture is unlike any he’s taken on before.

Freeman, co-founder of Cannon Pharmacy in 2001, celebrated the grand opening of Jocko’s Mini Golf on Thursday. Complete with a volcano that shoots fire and a waterfall, it’s one part of a small complex on 2 acres at 259 North Cannon Blvd. in Kannapolis. Jocko’s is attached to a Sno Biz franchise and across from a restaurant that will be called The Split.

The mini-golf course, Freeman said, aims to be a recreation opportunity for families because, particularly with Minor League Baseball on hold until next season, there aren’t many in the Kannapolis area. It features 18 holes with a volcano that will erupt regularly, a cave to walk and putt through with a waterfall outside, an outdoor pavilion, a monkey mascot and one hole that draws inspiration from the game Plinko, which made its debut on the TV show Price is Right.

COVID-19 also has changed things for his business. He can’t yet open the clubhouse that features a party room and arcade area that will raise money for the nonprofit organization Amanda’s Arcade for Hope. Workers will sanitize golf balls and clubs and limit the number of groups on the course. Customers are also allowed to bring their own putters and balls if they like, he said.

“We’re getting a little bit of flack for opening now, but there are not many options for families to get outdoors and do an activity and this is what the CDC recommends: get outdoors where you can properly social distance is your best options for activities,” Freeman said.

Because of tall trees adjacent to the course, he says, it should be mostly shaded after about 3 p.m.

Mayor Darrell Hinnant, who attended Thursday’s grand opening, said he knows Freeman’s latest project will be successful, particularly because of Cannon Pharmacy’s expansions into other communities since its founding in Kannapolis.

“So, I know that as long as Brian Freeman was involved in this project, it was going to be a success. There’s no doubt about it,” Hinnant said.

Freeman says he wants the project to be “a nice piece of the puzzle” in Kannapolis’ redevelopment.

One point of pride: the development is on a lot that formerly housed a KFC restaurant. He says Cannon Pharmacy has preferred to renovate existing buildings rather than build.

“We like to see old things become new,” he said. “We have gone from abandoned buildings that were falling down and a hazard and seen it completely turn around.”