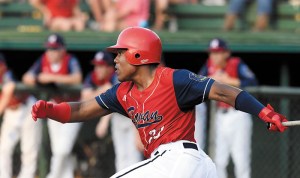 But Rowan also came awfully close to being swept.

The result of two cliff-hangers was a split.

Rowan did everything right on the mound and in the field in Game 1 and rode the left arm of 16-year-old Casey Gouge to a 1-0 victory over a club with a number of Division I signees.

But in a nightcap that ventured into extra innings and international rules, Rowan fell to the vistors, 6-4.

Gouge wasn’t fooling many hitters early, but long flyballs stayed in the park and line drives went directly at fielders.

By the fourth inning, he was rolling. He retired eight out of nine in one stretch.

Gouge went the distance on 86 pitches, striking out five, walking two and allowing five hits. Charlotte 49ers signee Jake Cunningham, a slugger who has been crushing homers, had two hits, but Gouge kept him in the park.

The critical inning for Gouge, who had his best curveball of the summer, was the sixth. After a one-out walk and a double by Max Hyman, Union County had runners at second and third. A base hit at that point probably would’ve meant losing the ballgame. But Gouge got the next two batters out on infield popups.

Ryan Onson, a right-hander who graduated from Sun Valley High, threatened to pitch a no-hitter against Rowan.

Rowan didn’t manage a baserunner against Onson in the second, third, fourth or fifth innings. He only struck out three, but he had put away 16 straight batters when Klingler got his hit.

Klingler  reached second base on a throwing error on his groundball to start the Rowan first. After Cole Hales walked, Klingler tagged up and advanced to third on Wayne Mize’s flyball into foul territory. Jordan Goodine whacked a groundball that was a potential twin killing, but he beat the relay to first to avoid a double play, as Klingler scored.

Gouge made that scratchy, solitary run look bigger and bigger as a quick game unfolded.

Rowan batters struggled again in Game 2, striking out 15 times against three Union hurlers and failing to capitalize on nine walks.

Dusty Mercer, headed to Virginia Tech, walloped a two-run homer in the first against Rowan starter Dylan Driver to give his team the early lead.

Klingler’s double, Hales’ single and a long double to left-center by Goodine got Rowan even at 2-all in the third.

Wingate-bound Nate Nygaard homered for a 3-2 Union lead in the fourth, but Rowan got even again when Goodine singled home a run in the bottom of the inning with two men out.

Scout Nichols relieved Driver in the fifth and got Rowan out of a jam.

Daniel Sell was sharp on the mound in the sixth and seventh for Rowan.

Union got fine relief work from Cade Kuehler, a Campbell signee, who took care of Rowan hitters in the fourth, fifth, sixth and seventh. Kuehler walked four, but he struck out eight.

The game was still 3-all after seven, and international rules were employed.

When Rowan played at Mount Airy on Tuesday, both teams began the eighth with a runner at second base.

On Friday, however, international rules were applied a bit differently. After some discussion, Union began the eighth with runners at first and second base. When Rowan reliever Hales hit the first man he faced, Union immediately had the bases loaded with no outs.

Cunningham then socked a two-run double. Nygaard added a run-scoring single for a 6-3 lead.

Then Rowan had its turn to start the bottom of the eighth with two men on. Mercer, who throws in the mid-80s was on the mound to close it, but he walked the first man he faced and Rowan immediately had the bases full, with the tying run at first base.

But Mercer fanned the next two batters. Hales reached on an error, with a run scoring, but Mercer got Mize to slap a groundball to end the game.