SALISBURY — A man accused of running from a traffic stop took Salisbury and China Grove police on a vehicle pursuit late Wednesday night.

The incident occurred just before 11:30 p.m. when a Salisbury police officer tried to stop a Honda at South Main Street and West Jake Alexander Boulevard for speeding and having a faulty brake light, said Salisbury Police detective Russ DeSantis. 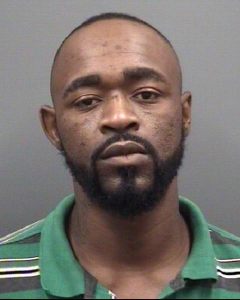 The driver, alleged to be Clayton, initially pulled over. As the officer was getting out of his vehicle, the driver sped off. The driver ran a red light and began traveling at 60 to 70 mph and occasionally reached 80 mph. The officer requested assistance from the N.C. Highway Patrol as the driver moved closer to the highway patrol station in Rowan County.

China Grove police deployed stop sticks and the vehicle stopped after striking them. Clayton allegedly lost control of the car, drove into the median, corrected himself and traveled 90 mph. He eventually turned off the vehicle’s lights and came to a stop.

Clayton is then alleged to have run from officers. A K-9 was called to the scene and was unsuccessful. China Grove officers, though, spotted Clayton Thursday walking near N.C. 152 and Miller Road, said China Grove Lt. David Walther.

A China Grove police officer also found a handgun thrown from the vehicle during the pursuit, said Sgt. J.R. Fox, of the China Grove Police Department.

Clayton was issued a $250,000 secured bond and an additional $45,000 secured bond for outstanding warrants on charges brought by Forsyth County authorities. Clayton remains in the Rowan County Detention Center.