NC3 baseball: Only a matter of time for Gouge 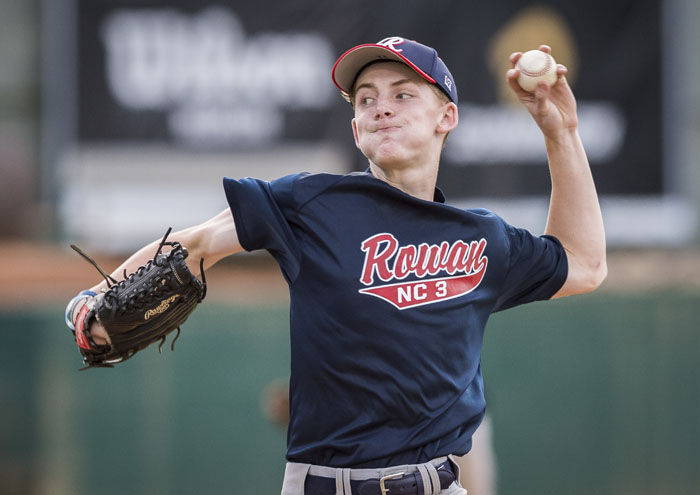 SALISBURY — Casey Gouge’s surname rhymes with huge, so don’t be surprised if  “Gouge is huge for West Rowan” becomes a go-to headline in 2021 and 2022.

Gouge, who is playing for Rowan County’s NC3 baseball team this summer, is only 16. He doesn’t throw major heat yet — he’s around 80 mph — and is just beginning to fill out.

But he projects to be a monster. He’s an exciting prospect, a southpaw who operates with skill and precision well beyond his years.

He’s already attracted quite a bit of attention. He’s on a list of the “top 10 unsigned left-handed pitchers in North Carolina.” That’s impressive for someone who has been on the mound in only a handful of varsity games.

“He’s going to be special because he enjoys the work and understands it’s a process,” said Seth Graham, West Rowan’s head coach and an assistant on Rowan’s NC3 team. “He’s one of those guys who’s always asking questions and trying to figure out how he can get better. He’s willing to try new stuff. He’s got the right mindset for pitching.”

Gouge is an unusual name, at least for Rowan County.

“Not in the mountains,” Gouge said. “Where we used to live, there were Gouges all over the place.”

The Gouges lived in McDowell County — that’s the  Marion/Old Fort area just east of Asheville — before coming to Salisbury about a dozen years ago. The VA Hospital was the reason for the relocation. Casey’s father, Larry, a human resources specialist, served in the Air Force, as did his father before him.

Casey’s older brother, Matthew, was an outstanding swimmer for West Rowan. Casey had thoughts of following his big brother in the pool, but as a West freshman he was faced with a decision He chose baseball winter workouts and weight lifting over swimming.

He’s pitched  a lot of innings to get to where he is now — for West Rowan Middle, for the Lake Norman Copperheads showcase team, plus two years of summer camps at the Naval Academy.

“Your parents drop you off at Navy and leave you and you stay in a dorm,” Gouge said. “It’s part prospect camp and part instructional camp. It was really good experience as far as maturing. I definitely would consider the military schools as a college option.”

Gouge spent almost all of his freshman year at West on the jayvee team.

“I pitched a good game against Carson’s jayvees,” Gouge said. “We were supposed to play Carson again that same week, but we got rained out. So then I got to pitch against them a second time.”

He considers those Carson games the highlights of his freshman year. West had no shortage of pitching, so he only appeared in one varsity game as a freshman. He won it.

Like a lot of other players in Rowan County, the spring of 2020 was expected to be the breakout  for Gouge. Graham was counting on the sophomore to join Cullen Davis and Daniel Sell as a staff leader.

Gouge got off to a tremendous start, including two scoreless relief innings for a win against defending 4A state champ Mooresville and four dominant innings, with six strikeouts, for another win against Northwest Cabarrus.  Gouge also was making solid contact at the plate — two RBIs against Mooresville, two RBIs against Northwest and 2-for-2 against Davie.

But then the season was halted abruptly in mid-March. That was a tough pill to swallow for all the Falcons. Everyone knew East Rowan, Carson and South Rowan were going to be good, but West was going to a factor. The Falcons already had beaten Davie County, as well as Mooresville.

“There’s no doubt in my mind, we would’ve had a big season,” Gouge said.

Gouge has impressed people in NC3 ball. His fastball isn’t overpowering, not yet, but it runs and moves, and he can located it.

“He’s a left-hander who can throw strikes, and that’s always a plus,” Rowan head coach Jim Gantt said. “He’s got a good feel for the changeup already, and with small adjustments, his breaking ball could really come along. He goes out to the mound with a plan, and you like to see that. The key for his development is going to be physical maturity and gaining more physical strength.

Gouge, who is 6-foot-1 and about 150 pounds, started the season with four straight excellent starts for Rowan and logged victories against Mocksville, Stanly County and Greensboro.

He’s added a slider and cutter to his pitching arsenal this summer.

“The cutter could be big for me because it’s a pitch I can run in on the hands of right-handed hitters,” Gouge said. “I’ve gotten great coaching this summer. We practice a lot, and I always feel like I got better. I was little apprehensive about joining this team. I didn’t know anyone except the West guys when I first came out here, but now I know there are some great dudes who go to the other schools.”

Nobody is perfect for long in baseball. Gouge hit a rough patch Sunday at Randolph County and took his first loss against a number of veterans from championship American Legion teams, but even in that shaky outing, Gouge took something away from the experience. He learned something with each line drive.

“I got behind too many hitters, and that’s the lesson I took away from it,” Gouge said. “I walked three or four, and that’s not good at all for me. I can’t keep getting in counts where I’m throwing fastballs to good hitters who are waiting for fastballs.”

Against some teams, Gouge’s stuff is good enough that he would’ve gotten away with it. Against Randolph County, he paid for every bad count and missed location, but there’s no doubt he’ll be better the next time he takes the ball.

“He’s got a good head on his shoulders,” Graham said. “He’s solid in everything that he does, and his velocity is going to keep building as he gets older, bigger and stronger.”

Gouge’s left arm is ahead of his bat at this point, but he’s no slouch at the plate. In showcase ball, he likely would have been only a pitcher, but he’s getting a decent number of at-bats for the NC3 squad. His offensive highlight was getting two hits in one inning.

“He’s good defensively at first base, and his swing is balanced and solid,” Gantt said. “He could be a viable two-way option.”

After that disappointing doubleheader loss at Randolph County on Sunday, Rowan’s team got home late.

But he didn’t call in sick. He had a job to do, so he did it. That’s another lesson he’s learned along the way.

“I was dragging a little bit, but I got through it,” Gouge said.