How to beat the heat during ongoing summer temperatures 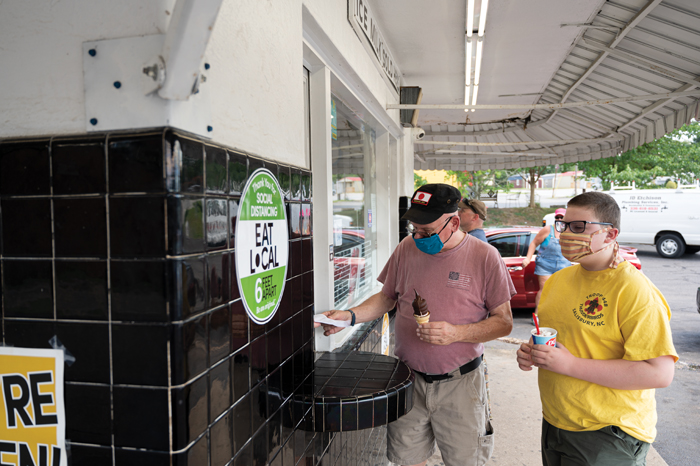 Josh Bergeron / Salisbury Post - Matt Balent, left, and his son get ice cream Wednesday at the Dairy Queen on West Innes Street in Salisbury. Matt got a dipped cone and his son got a blizzard.

SALISBURY — While there haven’t been record-breaking temperatures, locals have experienced a harder time staying cool lately, with the temperatures hovering in the low-to-mid 90s and the heat index pushing things even hotter.

The National Weather Service predicts high temperatures remaining close to or within that range into next week. And that kind of heat can have an impact on the body, says Rowan Emergency Medical Technician Michael Eden. Prior to becoming an EMT, Eden was an athletic trainer for Catawba College for 19 years and is in the midst of obtaining a degree as a paramedic.

Sweat evaporating is the best way to cool the body, but sweating also means that people lose fluid, he said.

“In a very hot, humid environment, when the humidity is high outside, we will still sweat. When our sweat doesn’t evaporate, we run the risk of developing any heat-related illness or conditions,” Eden said. “As we sweat, that’s fluid that needs to be replenished,” Eden said.

Water is the go-to beverage, he said, but sweat for a long period of time also means losing electrolytes, which includes sodium and potassium.

“If you just consume only water and you do not replace your electrolytes, there is some danger to that,” Eden said. “It’s important that if we’re out in the heat, if we’re exposed to the heat, if we’re exercising or walking or working outside that we are supplementing our bodies with the fluid lost, and more importantly that we are getting the electrolytes that we need,” he said.

A sports drink like Gatorade or Powerade are good sources that are formulated to replenish the body with electrolytes when people lose them through sweat, Eden said.

Beverages to stay clear of as a means to rehydrate include coffee, tea or soft drinks. Those beverages can be dehydrating, he said.

As an athletic trainer and now as a first responder, Eden asks a series of questions when someone is experiencing a heat-related condition, including when he or she last ate or drank as well as when and how much he or she last urinated. The answers can help determine if someone is dehydrated, he said.

As a first responder, he’s focused on the color of the person’s urine. The darker it is, the more likely the person is dehydrated. The same is true if the person isn’t using the bathroom often or not urinating a normal amount.

“If you are starting to feel thirsty, have dry mouth, have headaches, start to feel a little dizzy or very fatigued or a little bit confused or if you’re starting to feel hot, those are early signs that your body is dehydrated and you are at risk for developing a heat-related condition,” Eden said. 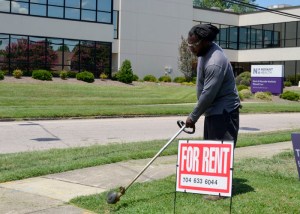 James Pressley, an employee with Land Artists, works in the heat on Wednesday trimming the edge of the lawn at a local business. Pressley said he wears a shirt that keeps him cool. Shavonne Potts/Salisbury Post

Heat cramps can develop after losing fluid and electrolytes; that’s because the body is getting overheated and not replenishing those fluids.

“You can get headaches, feel dizzy, tired or weak. The person may feel very nauseous. They are still sweating very heavily,” Eden said. “After heat exhaustion, if a person doesn’t replenish fluids, replenish electrolytes and they are not moved from the heat source and their body is not cooled off they can develop heat stroke,”

Anyone with heat exhaustion would have a fast but weak pulse. He said his or her skin would be cold, pale and clammy, although they could still be heavily sweating and feeling tired. The muscles might cramp up and the person could feel dizzy or pass out, he said.

“We need to remove our sweaty clothes, get into cool environment, drink sports drinks, drink some nice cool water, replenish our bodies with what we’ve lost,” he said.

Heat stroke occurs when the body can no longer cool itself. It typically involves extreme confusion. If the person is conscious, they will be nauseous, dizzy and have a bad headache. The person can lose consciousness. They will have a very fast, strong pulse. Someone who is in heat stroke with have very hot, red, dry skin, Eden said.

That person’s body is no longer able to cool itself and their core body temperature is well over 100 degrees, maybe 102 or 103 degrees.

“That is a very, very dangerous medical condition,” he said, noting that the conditions are preventable.

“The biggest thing is to monitor their exposure. If kids want to go outside and play, the cooler times of the day (are best),” Eden said.

“We want to limit that exposure,” Eden said.

The best thing is to have a plan, he recommends. If someone has existing health conditions or is young, it’s good to create a plan focused on keeping cool, monitoring how long they can be outdoors and making sure they hydrate.

“A lot of us don’t realize it can happen very quickly,” he said.

If possible, he says, leave pets at home. If that’s not possible, have a friend tag along so they can sit in a cooled car with that pet, Eden said.

“I don’t recommend leaving a pet in a car, even if the windows are cracked or engine is running,” he said.

If the outside temperature is anywhere between 80 and 100 degrees, the temperature inside the car parked in direct sunlight can very easily climb to deadly heights.