Basketball: Dunbar ran the table in 1959 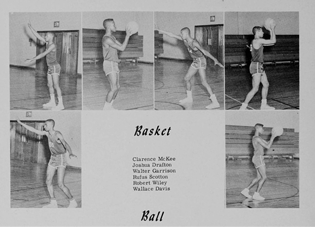 EAST SPENCER— It was March 14, 1959, East Spencer’s Dunbar High against Burlington’s Jordan Sellars High for the 2A state basketball championship for Black schools.

Both teams were known as the Tigers. The venue was North Carolina A&T.

Before integration, the North Carolina High School Athletic Conference administered competition among Black high schools. The NCHSAC merged with the NCHSAA in 1968 and was disbanded in 1969. At it peak, the NCHSAC governed more than 100 member schools.

N.C. A&T was familiar ground to many of the Dunbar players. They had toured the school as part of their academic curriculum. It was seen as a potential destination for bright students. The other leading options for Dunbar males after high school were Livingstone College, working for the railroad or in the mills or military service.

Dunbar was a small school to be playing for a 2A basketball title. There were 51 students in the senior class. Of those 51, 27 were boys.

Dunbar’s starting lineup included three of those seniors — Joshua Franklin Drafton, the high-flying big man and leading scorer; Robert Norman Wiley, the No. 2 scorer, and Clarence McKee Jr., who averaged 10 points a game. The other two starters were sophomores — Wallace Davis, who averaged 11, and Walter Garrison, who averaged 10.

It was a difficult team to defend. It was a basketball democracy. No one averaged 20, but all five starters were caable of  hit double figures, sometimes all on the same night.

The sixth man, Ammit Rufus Scotton, was the standout athlete of the junior class. He answered to “Bo.”

Before the championship tussle, Dunbar coach Harry Koontz held an important conversation with Wiley. He instructed Wiley, who was averaging 15 points, to leave the scoring to his teammates. On this night, Wiley would need to focus all his effort on defense. His task was to shut down the star player for Jordan Sellars.

Wiley was all about team above self. He did exactly as his coach instructed. He wouldn’t take a shot in the title game.

Born in 1914, Koontz, had been a star athlete in baseball, football and basketball when he graduated from Logan High in Concord. He earned a degree at Livingstone in 1937 and went on to graduate school at Indiana University.

He entered the high school coaching ranks at Ridgeview High in Hickory. He arrived at Dunbar in 1947 to teach match and P.E. and coached the Tigers until the school closed in the spring of 1969.

Koontz had some stellar material to work with in 1959. McKee, president of the student council and voted “Most Intellectual” and “Most All-round” by his classmates, aspired to be a doctor. Wiley, whose dream was being a pharmacist, was voted “Best Looking.” Drafton, who was looking forward to a military career, received perhaps the most coveted senior superlative — “Most Athletic.” Robert Henderson, a senior reserve who hoped to become a P.E. teacher, was voted “Best Dressed.”

There was no senior superlative for best name, but that unofficially belonged to another senior reserve — Franklin Roosevelt Davis.

There wasn’t a ton of drama during Dunbar’s regular season. The Tigers were just too strong. They went 16-0 and prepared to host the district tournament on their home floor.

Thomasville was the first opponent in the district and ran headlong into a buzz saw. Wiley scored 24, McKee had 19, and all five starters were in double figures in an 85-48 romp.

Troy’s Peabody High was no match for Dunbar in the semifinals.

The district championship game was brutal. Dunbar held Lexington to 11 points in the first half, was up by 35 after three quarters and cruised 74-35. Wiley and Davis scored 18 each. Drafton got 17, and everyone got to play. The crowd was estimated at 1,000 fans.

Wiley and Drafton were named to the all-district team.

Dunbar took on the Elizabethtown team, from Bladen County, in southeastern North Carolina, first. This was much more competitive than what the Tigers had been experiencing, but Dunbar won, 63-48. Garrison led the way with 15 points. Drafton scored 12. Davis added 10.

The semifinal contest nearly got away fom Dunbar. The Tigers had to withstand quite a charge from the Queens Street High team that was representing Beaufort, near Morehead City.

Queens Street was down 32-17 at halftime, but scored 47  fast-breaking points in the second half. Davis scored 24 and Drafton scored 20. Dunbar held on, 69-64, to win its 21st straight game. Koontz never substituted. Even Scotton didn’t get in.

Koontz had taken Dunbar to a title game in 1952, although that one had been a blowout out loss for the Tigers.

Koontz didn’t want to see a repeat of that. Maybe that’s why Wiley focused totally on defense against Jordan Sellars, the defending state champs.

Even with Wiley not scoring a single point, Dunbar had enough offense to take an eight-point halftime lead. Dunbar finished off a 54-41 victory to cap a 22-0 season. Davis, McKee and Garrison scored in double figures. Scotton came off the bench to score seven.

Wiley’s defensive effort didn’t go unnoticed. He made the All-State team, along with Drafton.

One thing that isn’t in doubt is that it was a glorious era for Dunbar basketball.

In the 1959-60 season, Scotton emerged as the No. 2 scorer in Rowan County as a senior (behind Boyden’s Eddie Kesler).  Garrison, Davis and Joe Hawkins also averaged double figures for a Dunbar team that made it back to the state title game, only to lose a close battle with Jordan Sellars.

In 1960-61, Dunbar made its third straight trip to the 2A championship game. As seniors, Garrison and Davis were two of the top three scorers in Rowan County. Dunbar fell in the championship game to LaGrange, a school from the Kinston area.

• Wylie became one of the finest basketball players in Livingstone College history and was inducted into the school’s Sports Hall of Fame in 2006. Wylie graduated from Livingstone in 1963 with a biology degree and went on to earn additional degrees at Notre Dame and North Carolina A&T. He worked in the Charlotte-Mecklenburg schools as a science teacher and in 1967 was appointed as the planetarium instructor at the Charlotte Nature Museum (now Discovery Place). After nine years of teaching, Wylie went to work for IBM for 30 years. He passed away in September, 2019.

• Drafton entered the U.S. Army in 1961 for basic training at Fort Jackson, S.C. He went to the signal corps school at Fort Gordon, Ga.. He served in Korea and Turkey.

In 1969, he served as a sergeant in a signal brigade in Vietnam.

• McKee went on to college at North Carolina A&T and was a guidance counselor and assistant principal in Sanford before relocating to Winston-Salem.

He enlisted in the Navy in 1967 and was serving on an ammunition ship off the coast of Vietnam in 1969 when he was named the U.S.S. Virgo’s “Sailor of the Month.”

Garrison worked for the Mare Island Naval Shipyard on the West Coast for 16 years and the Army Corp of Engineers for nine years, He died at 65 in 2006.

One of Garrison’s brothers, Lawson, was the first Black player to play for Salisbury’s professional minor league baseball teams.

• Scotton attended Livingstone before he was drafted into the U.S. Army. He retired from the Bill Hefner Medical Center. He died in 2016.

In 1966, he coached Romus Jefferies, who set a Rowan County single-season record with 29.6 points per game.

Koontz coached three Dunbar teams to NCHSAC runner-up finishes, but the 1959 Tigers would be his only state champions.

The 1959 Dunbar school yearbook is dedicated to Koontz — “an understanding teacher, a true friend, and the best coach any basketball team ever had.”

NC3 baseball: Only a matter of time for Gouge