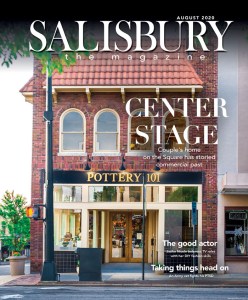 SALISBURY — The August issue of Salisbury the Magazine, a publication of the Salisbury Post, has reached subscribers and is now available elsewhere.

Closures prompted by the response to COVID-19 have affected some of the normal distribution sites. If you can’t find a copy at your regular spot, magazines are available at the Salisbury Post office, 131 W. Innes St.

The August cover features the commercial/residential building that houses Pottery 101 on the Square and also serves as home for Ted and Cheryl Goins. Contributing writer Ben White recounts many of the enterprises which have been associated with this 1873 building through its history.

Writer Kris Mueller checks in with Catawba College alumna Jasika Nicole, a well-established television actor whose most recent role has been that of Dr. Carly Lever on the television series “The Good Doctor.” Nicole, who lives in Los Angeles, also has a large following with her blog in which she shares her views and describes many of her do-it-yourself fashion items.

Deirdre Parker Smith shares the story of Army veteran Casey Benson, who turned to cooking and team support from the Hefner VA Medical Center in Salisbury as a way to cope with his PTSD.

This 45th edition also includes a feature on portrait artist Mark Stephenson, whose subjects have included many notable local figures.

In addition, contributing writer Susan Shinn Turner tells how the fun group Sweet Potato Queens directed their recent fund-raising efforts toward the new Wallace Cancer Institute, which is scheduled to open in August.

Rowan-Kannapolis ABC Manager Terry Osborne is the subject for the Rowan Original Q&A. Bookish covers the recent publication of Historic Salisbury Foundation’s “Beyond the Hedges,” chronicling the organization’s impressive accomplishments over close to half a century.

Mary Ann Roberson provided the Through the Lens photo, and Keyth Kahrs did the artwork for Salisbury’s the Place.

Salisbury the Magazine publishes nine times a year. The September issue, now in the works, will be reaching subscribers in mid August and distributed elsewhere later in that month.

Summer issue of Salisbury the Magazine is now available

SALISBURY — The summer issue of Salisbury the Magazine, a publication of the Salisbury Post, has reached subscribers and is... read more