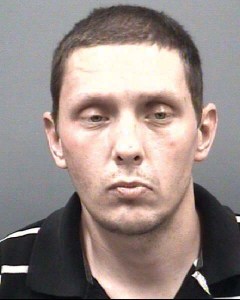 The sheriff’s office conducted a traffic checkpoint during which each driver was asked about their license, registration and proof of insurance. The driver of a vehicle that came through the checkpoint said she did not have a valid driver’s license. The woman was asked about a strong odor of marijuana coming from the car and asked to pull over. Brady and the driver said they had been smoking marijuana and there was nothing else in the vehicle, according to the sheriff’s office.

Both the driver and Brady gave the officers consent to search the vehicle, the sheriff’s office said. The driver had a cellphone and a pocketknife.

Brady had a glass smoking pipe in his front pocket. According to the report, he admitted to being “addicted to methamphetamine” but said there was nothing else in the vehicle. Deputies found a crystal-like substance in the front pocket of a backpack that belonged to Brady. The substance allegedly was found in a cigarette box along with a small amount of marijuana wrapped in a bag.

Brady said the driver had no knowledge of what was in the backpack. He was arrested at the scene and remains in the Rowan County jail under a $1,000 secured bond.