Carson student will go the distance to raise money, awareness for hospital that helped injured uncle 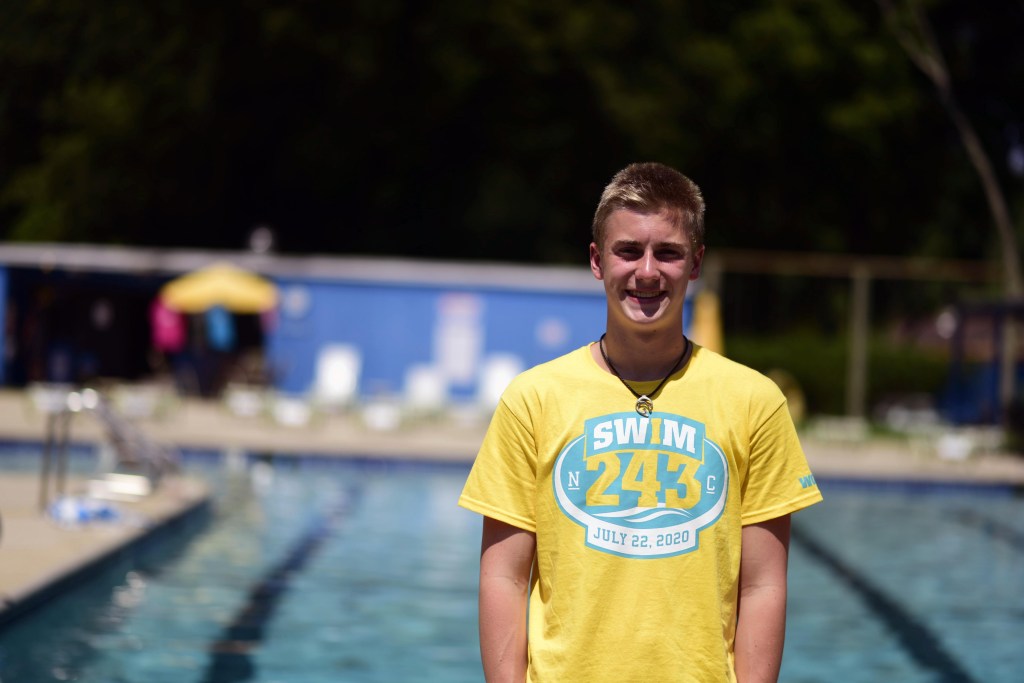 Carl Blankenship/Salisbury Post - Cooper Sever will swim about 30 miles over the course of 24 hours on Tuesday to raise money for the Sheperd Center in Atlanta. The hospital rehabilitated his uncle after a motorcycle crash resulted in a spinal cord injury.

SALISBURY — Cooper Sever, a Carson High School student, will perform a 24-hour swim starting today to raise money for the hospital that helped his uncle after he was paralyzed from the neck down.

Former N.C. State Trooper Chris Wooten was thrown from his motorcycle during a pursuit in July 2019; the incident left him with a complete injury at the top of his spinal cord. Wooten was eventually transferred to the Shepherd Center in Atlanta for rehabilitation after regaining some strength at Carolinas Medical Center.

Wooten said he no longer remembers going to work the day he was injured. His wife, Sharon, said everything they know about the incident was learned by by speaking to first responders. Chris reportedly cleared an intersection during the chase, but a full-size pickup truck came from an area he could not see and struck him. Neither Chris nor the truck driver were at fault.

The Shepherd Center is a hospital that specializes in rehabilitating people who suffer from neuromuscular issues like spinal cord injury, multiple sclerosis and acquired brain injury. Wooten spent six months at the center with Sharon. Now, Chris needs constant care, and Sharon has learned as much as possible about how to take care of him while watching workers help him day-to-day.

The couple says the center also showed them how to help Chris live a better life. He can still enjoy things like being taken on walks with his wife, and he can travel by air. While he wishes the accident never happened, Chris said he is thankful for the support he has received. It could have been worse, he said. Chris said he could have suffered a brain injury. So, he’s glad that his mind is still sharp.

Sharon said she and her husband have shed tears over what they can not do anymore, but there have been some happy tears, too. Chris is still here to be able to watch their children move through their life.

Wooten’s 16-year-old nephew, Sever resolved to do something to benefit people who suffer injuries like his uncle’s.

A lifelong swimmer and son of Catawba College head swim coach Michael Sever, the Carson student has spent the past few weeks preparing for the endurance swim, which will specifically fundraise for the Shepherd Center’s patient assistance fund. The training has involved long swim sessions a few times a week, alternating swimming for 30 minutes with 30 minutes of rest. Cooper will follow the same format when he starts today, covering about 30 miles in the water in 24 hours. He’ll have familiarity on his side, too, as he’s also a lifeguard at Eaman Park Pool.

Michael described his son as a fish.

“It’s all I’ve ever really known,” Cooper said. “I haven’t really done much other than swimming.”

On Monday, Cooper was about a third of the way to his $30,000 goal, which is roughly the cost of a durable mobility chair for someone who has suffered a spinal injury.

But it’s about more than money, too. Cooper said he wants to raise awareness for people who have sustained injuries like his uncle’s. Cooper said he has learned about savoring key moments because you can never know when things could change.

As for his chances of completing the 24-hour feat, Cooper feels confident.

“I’ve learned about perseverance and patience,” Cooper said. “These have been really long swims, and I’ve just got to push through it.”

Donations to the fundraiser can be made at swim243.com and shepherd.org/giving/swim-243.